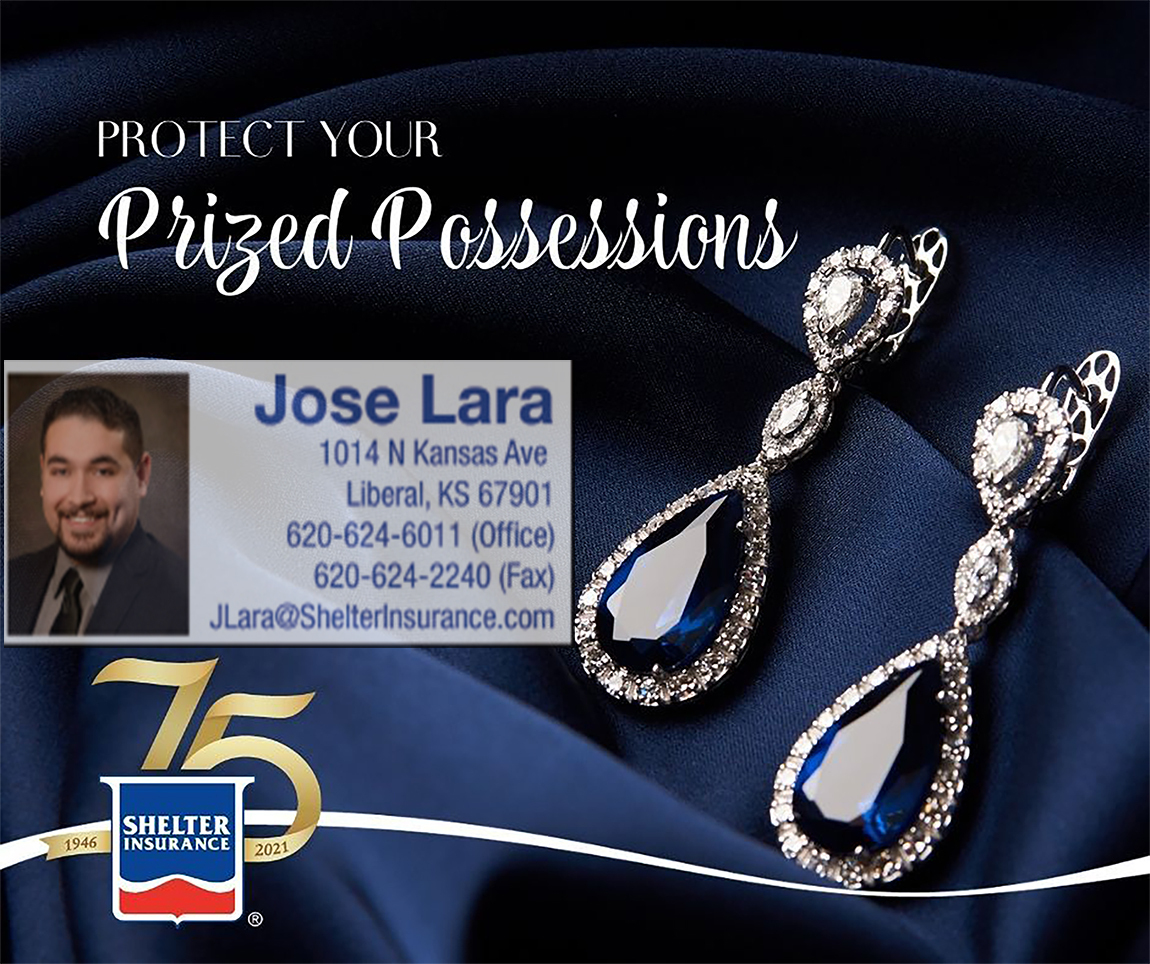 It was opened for the first time just days before the 2005 edition of Pancake Day, and now, a second level of the International Pancake Day Hall of Fame will be complete in time for this year's celebration.

Most of the work on the second floor was completed after the 2006 event, according to Pancake Day General Chairman Janice Northerns.

"For the last Pancake Day, the second story was totally unfinished," she said. "It was just empty. It's completely finished now. We have a conference board room, which we'll use for our board

meetings. It will also be available to use if a group wants to meet there. We have an office space up there for our secretary and treasurer, which is going to be really important during Pancake Day. We want to eventually get all of our records moved there. We've got a lot of storage space. We have a little area where we're going to put a TV and a VCR, and it's going to be an educational area. Eventually, we'd like to be able to have school groups come through there and give tours. Part of the tour would be the video about Pancake Day."

Northerns said while the Hall of Fame was barely open for 2005's Pancake Day, the board did manage to get some exhibits in it for last year's event.

"We just let people go in and look around, but we weren't really using it," she said. "Last year, we had exhibits up and actually were using it. I'm just amazed that we have the second story finished this year. None of us dreamed a year ago that we would be this far along."

"We were excited to have it open at all. because we finally have a place to keep all of our memorabilia," she said. "We've got 58 years worth of past Pancake Day souvenirs and pictures. Our next job is going to be to get all of that catalogued and get some more out on display." 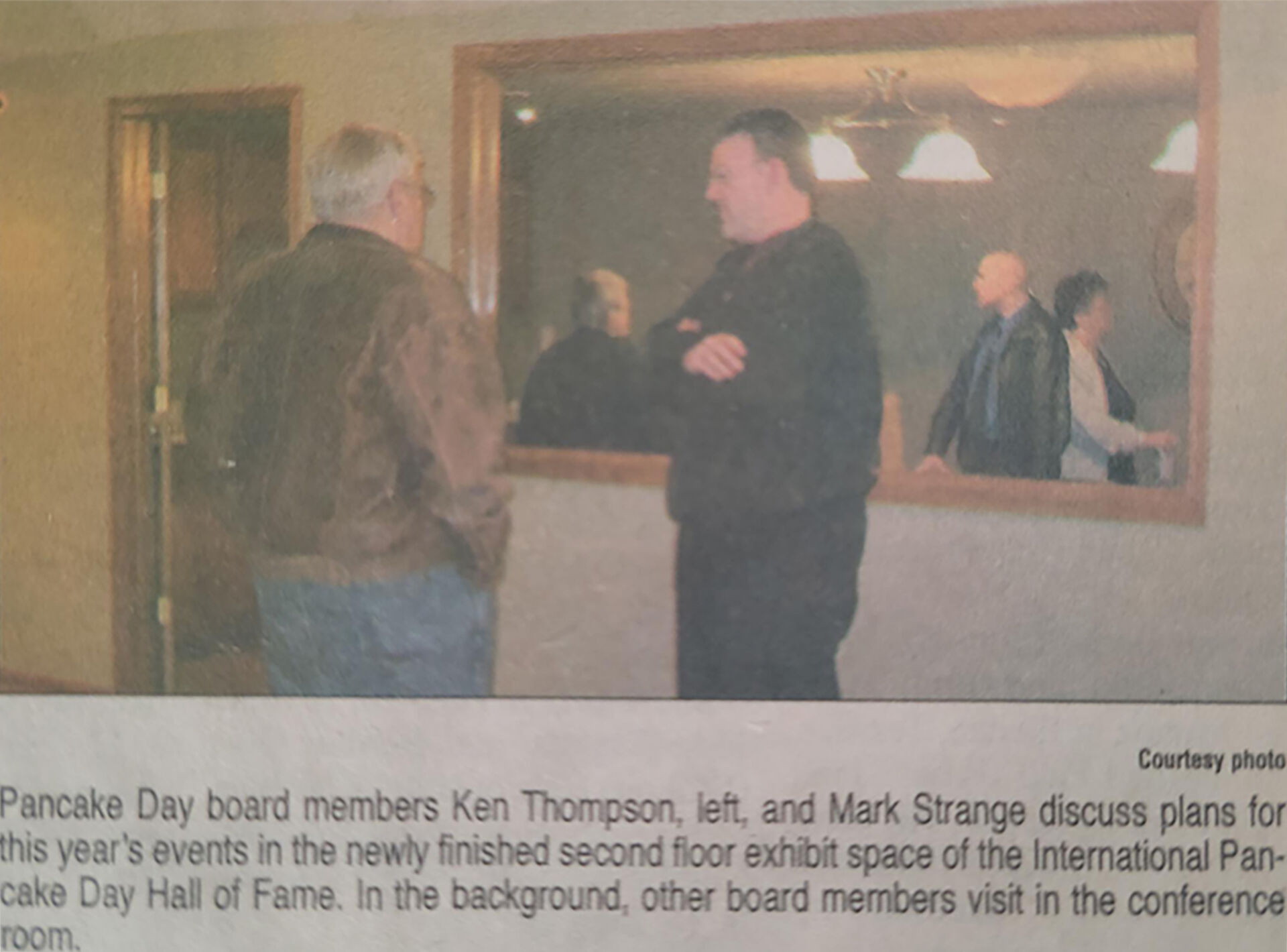 Northerns said the board has also found a new member who will conduct tours for groups or individuals during the week or on weekends.

"We've got a new board member, Ken Thompson," she said. "He has agreed to be available to give tours of the Pancake Hall of Fame. This is exactly what we're looking for. Someone who has the time, who, if a group calls, he's going to be available pretty much year round to give a tour to anyone who would like to come look at it."

While the structure portion of the upper level is complete, Northerns said it could take some time before displays are put in on the second story.

"We haven't put up any additional displays because we just got it finished last week," she said. "We are cleaning it up, and, hopefully, we'll get some things up on the walls. Right now, we have a table and chairs. We have furniture ordered for the upstairs including a TV and VCR unit. We will have all that in for people to look at for Pancake Day. We'll have some displays up."

Northerns said there is plenty of stuff to put up, but "it's just a matter of finding time to get some of it organized and out on display."

"There's some room up there to put more displays," she said. "Eventually, we're going to have an enclosed viewing area above the porch, but that'll be somewhere later down the road."

Overall, Northerns said she and other board members are pleased with the work done on the second floor of the Hall of Fame.

"It looks fantastic," she said. "It's just better than I could've dreamed. It's really classy looking. It has hardwood floors. Part of it's carpeted. The color scheme matches the downstairs, sage green and burgundy. We've got some really neat light fixtures and cool windows. It's a fitting home for the treasure that we have to put in there, which is all 58 years of memorabilia." 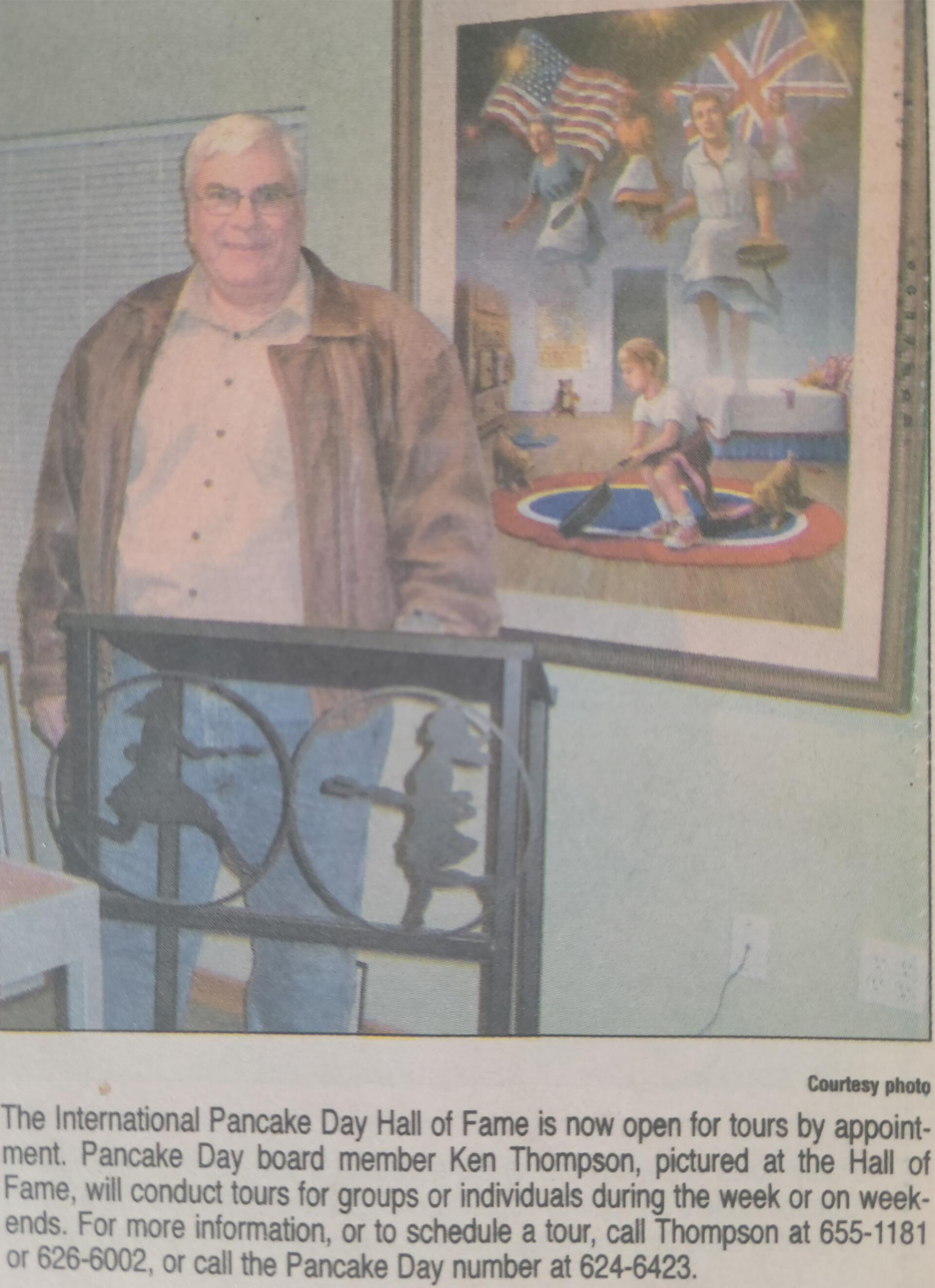 With the necessity of adding more memorabilia to the Hall of Fame with each passing Pancake Day, it could become essential to expand the facility, but Northerns said no such strategy has been discussed or considered by the board as of yet.

"We don't have any plans for that at this time," she said. "We do have basement space that's unfinished right now. We have so many boxes that it's useful to have the basement area to store all of that. We're hoping to get catalogued and organized a little bit better, but eventually, we could finish out that basement area and use that for display area also."

The Hall of Fame is being used for other purposes as well, Northerns noted.

"Already, we've had civic groups who've asked to meet there because they want to have a meeting and tour the Hall of Fame," she said. "For any local organization that would like to have a meeting there, it's available for that purpose."