Rabbits in the garden? 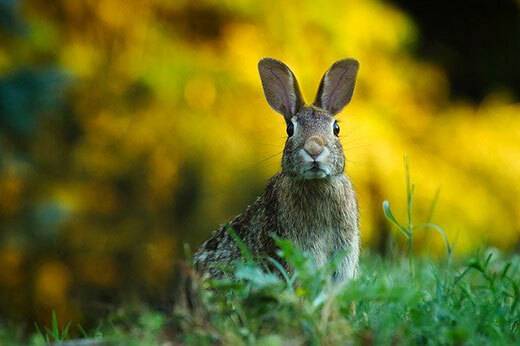 MANHATTAN, Kan. — Rabbits are a common invader of home gardens, especially when plants flower in spring. Kansas State University horticulture expert Ward Upham said there are many common-sense ways to keep the hungry critters out.

“This time of year, rabbits gravitate to young vegetables and flowers,” Upham said. “But there are some vegetables that are rarely bothered, including potatoes, tomatoes, corn, squash, cucumbers and some peppers.”

Upham said some methods for keeping rabbits away include:

Fencing is often the quickest and easiest method of control. Upham recommended the fence be at least two feet tall with a fine mesh of one inch or less. Fencing support can be provided by a variety of products, including electric fence posts. However, fencing may not be a viable choice based on the desired appearance of the garden.

Floating row cover is a light woven material that can be placed over plants yet still allows light, water and air to come through.

“Though most often used to promote early growth by keeping plants warmer than normal, it can also help protect young plants from insects and wildlife,” Upham said.

Although commonly suggested for rabbit control, repellants must be re-applied frequently. Some can also be poisonous and cannot be used on plants intended for human consumption, Upham warned.

Upham said live traps are usually recommended when the rabbit can be moved to a rural area several miles away from where they were initially caught.

“A number of baits can be used to entice the rabbit to enter the trap, including a tightly rolled cabbage leaf held together by a toothpick. However, rabbits often avoid baits if other attractive food is available.”

A motion-activated sprinkler can be attached to a garden hose, releasing a short burst of water upon motion. Upham suggests picking a product that advertises it can protect at least 1000 square feet: “Such products are available from Contech, Orbit and Havahart,” he said.

More information on rabbits and rabbit control is available online from K-State Research and Extension.

Upham and his colleagues in K-State’s Department of Horticulture and Natural Resources produce a weekly Horticulture Newsletter with tips for maintaining home landscapes. The newsletter is available to view online or can be delivered by email each week.