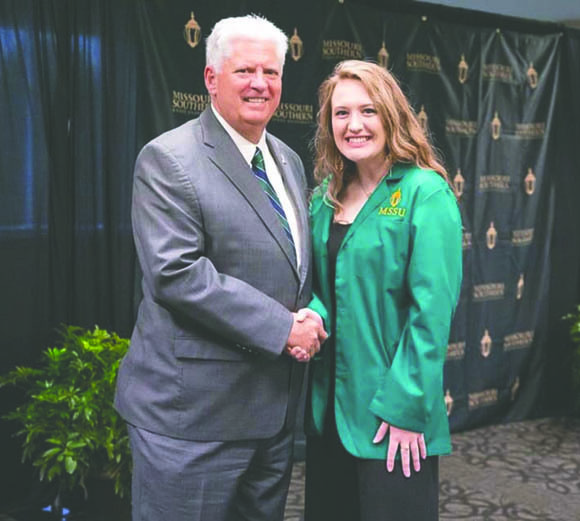 Missouri Southern State University student Chloe Hendrich shakes hands with a MSSU faculty member for a past photo. Hendrich is preparing for an upcoming trip to Italy, and she said she is excited to learn everything she can. Those wishing to make a contribution by visiting www.mssu.edu/giving/yours-to-lose and specifying their donation to go toward Hendrich. Courtesy photoELLY GRIMM • Leader & Times

The chance to travel abroad does not come up that often for many people, but for one Turpin High School graduate, that chance will be coming up for her later this year.

2019 Turpin High School graduate Chloe Hendrich, who is studying medicine, will get the chance to visit several sites in Italy as part of a program through Missouri Southern State University.

“This upcoming trip to Italy is to study art and anatomy, and it's through the Yours To Lose study abroad program through Missouri Southern University, which is an advanced pre-med program,” Hendrich said. “This trip is required by the medical program I'm in and one of the classes I'm taking is about observation in art and learning about how to better observe our patients as physicians. The point of the trip is to go to Italy and see this art we've been studying so far and also walking through the beginning of medicine since quite a bit of that got started with Da Vinci and some of those people way back when. We leave for the trip May 25 and we'll be coming back sometime in the middle of June. It's part of the program I'm currently part of, so I've technically known about it since I was a senior in high school, and it's been a goal of mine to reach that. The trip was initially supposed to take place last summer, but COVID-19 screwed that plan up, so it's going to be taking place this summer and it's a trip I've been working toward for a few years now.” 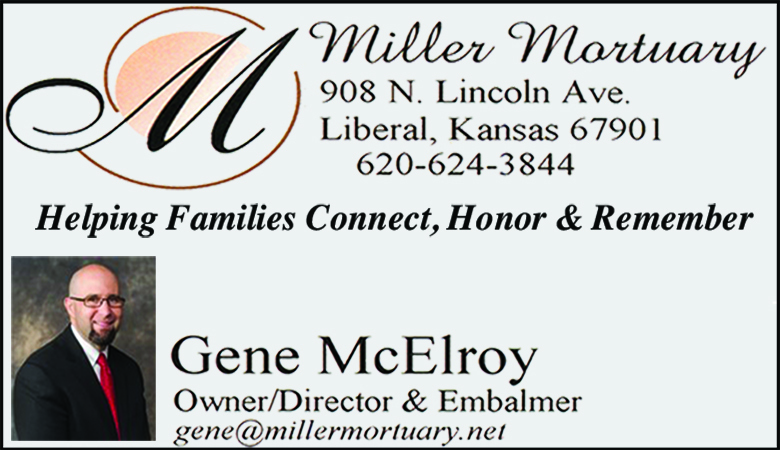 With Italy being known for several sites to see, Hendrich said there are many things she is excited for with the upcoming trip.

“I'm really excited to see Michaelangelo's David statue, I think that will be really neat to see in person. I'm also excited to visit The Vatican and the catacombs and places like that, and we're also going to go through the Da Vinci Museum and a bunch of places like that, so we'll be seeing a little of everywhere during the trip, including Rome and Pompeii,” Hendrich said. “The people I'm going with are in my cohort, which is really great, because we all started college three years ago and we've taken all the same classes together and lived together and all of that, so I'm really excited to have this experience with them.”

With such an extensive trip, however, funds must be raised for those who are going, and Hendrich said there has been quite a bit of work to help raise money.

“We've been working the concession stand at events and we've been doing small jobs on campus, but the issue is there are 30 to 40 of us going, so it's hard to get traveling funds for that many people,” Hendrich said. “We all sent out fundraising letters to people we know, and there are also some programs through the school providing scholarships to help with this. There's also a Web site through the college, www.mssu.edu/giving/yours-to-lose, where people can donate, and I think that would be the best way if someone would want to donate directly to this. Any donations would be greatly appreciated, this is a once-in-a-lifetime opportunity, and especially being from that area of the U.S., there's not a lot of opportunity for extensive travel like this. So the fact that I'm able to go on such a big trip like this that's both educational and influential on my future career, it's a really big deal. Also, in that area, there aren't really very many physicians who go through school with the goal of going back and practicing in their hometown. I've been influenced by that area my whole life and my goal has been to serve as a physician in that area after I finish school.”

Hendrich also talked about what sparked her initial interest in the medical field.

“When I was in elementary school, we had to do a project about an illness that had affected someone in our family, and I picked bone cancer because that's what my great-grandfather passed away from,” Hendrich said. “That project really interested me and I thought it was really complex and cool at the same time about how the human body works and how things like that work, so that was a big influence on me when I was growing up. After that, I picked up medical factoids here and there as I was growing up and I ultimately decided I wanted to learn the science side of things and help people and build relationships with patients and help them get better.”

So what is Hendrich’s goal after finishing school?

“That's a great question,” Hendrich said with a laugh. “I used to want to do pediatric oncology for a long time so I could work with kids and also learn more about cancer, but the more I go into that, the more I'm not sure because there's a lot of genetics study involved with that, and that's a huge wormhole to get into. Right now, I'm looking into psychiatry because I feel like that would help me have a closer relationship with patients and get to know them on a deeper level. All of my medical school friends are warning me not to make up my mind just yet since there's still so much to learn and so many rotations and everything else to go through. So at the moment, there is something I'm leaning toward, but I'm definitely keeping an open mind as I keep going through school.”

Overall, Hendrich said, she hopes to learn a lot from the trip.

“A lot of us are from more rural areas, so I hope by having the chance to go on this trip to somewhere new and more exotic, it'll help us all learn more about different cultures and learn more about the history of medicine,” Hendrich said. “At one of the museums we're going to, they've got models of when the autoimmune and lymphatic systems were mapped out, and it's fascinating to see that in person. I worked on a cadaver last semester and those structures are so small and intricate, and I'm excited to see these models because back in that time, the tools we use now were nowhere near available like with microscopes and special lights and things like that. I'm excited to see what work these people were able to do way back then compared to what we're able to see now. This program I'm in is three years and then straight to medical school, and that kind of program is pretty rare. I've been trying to get the word out about it to students back home as an option, and I would love to see more potential future doctors take a chance with it. I'm also excited to spend the last year of my undergrad time with my cohort, it's a great group to work with and they're all amazing. This trip is also my last really big thing before medical school starts, so I'm excited to have a big burst of fun and travel before my life gets crazy busy with medical school and everything that goes with that.”