City looks to save air service with fewer flights 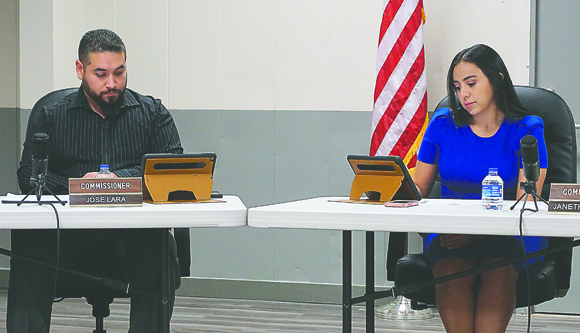 City commissioners Jose Lara and Janeth Vazquez look over some notes on an agenda item during the commission’s most recent meeting Tuesday. The commission took on a wide variety of items requesting approval. L&T photo/Elly GrimmELLY GRIMM • Leader & Times

The Liberal City Commission moved things along pretty easily during its most recent meeting Tuesday evening.

Up first for the commission was discussion of Essential Air Service (EAS) at Liberal Municipal Airport.

“We received a letter from SkyWest to send to the Department of Transportation in Washington. SkyWest is wanting to go down to one flight per day starting July 1, and that can hopefully help them get through the pilot shortage, which is the reason they’re giving for wanting to do this,” Airport Operations Chief Brian Fornwalt said. “Once this happens, they’ll rescind their notice to stop service, and they’ll stay here  – and they would have had to stay here until Jan. 31 2023 anyway. And maybe in the future, they’ll rebid it. We do go out for bid again in September for the next three years, and the bids will be in by November, and the commission will have them as soon as I get them, which will be good so everyone has input.

What this letter is is it’s letting the Department of Transportation know we do approve of SkyWest going down to one flight per day for the time being, and there’s no end date on that except for that Jan. 31 deadline, unless they do end up rebidding. Something they could also do later on is if we keep them going, it’ll be like an alternative EAS and more of a charter than an actual commercial flight. They still have where they tag in with United so people still get their bags and all of that through United, but it’ll be more of a charter situation, and it’ll drop down to 30 passengers, so it wouldn’t be the 50-passenger plane anymore.”

After a few more questions, the commission ultimately approved the request for the Department of Transportation reduce the frequency of EAS flights from 12 to seven weekly round trips between Liberal and Denver effective July I, until SkyWest is able to restore service to EAS minimums.

Up next for the commission was a request from the Liberal Municipal Court to switch to a different collection agency.

“We currently use the Kansas State Set Off Program, and we would like to switch to the Collections Bureau of Kansas (CBK),” Municipal Court Director Kim Clinkingbeard said. “There are some reasons we’re wanting to switch, including us wanting to integrate with our new court software we purchased. This new program also doesn’t charge a percent, which means if they send someone’s fines and fees owed for $500, the City will get the full $500. The Kansas State Set Off takes between 19 and 24 percent of the amount we send depending on how hard they have to search for that individual. With CBK, I think we’ll get a better return because they’re going to do a lot more research and things like that. And they do work with the Kansas State Set Off Program, so it’s not like we’ll completely lose access to them. As long as I’ve been with the City of Liberal, we’ve used the Kansas State Set Off Program and looking at the totals from the past, it looks like by the time they took their percentage, we only brought about $2,500 for last year. We’re hoping, with the new system, we could try something new and bring in some new revenue for the city and see how it works for us.”

Ultimately, the commission approved the request to switch to CBK. Up next for the commission was an update from Grants Director Karen LaFreniere regarding the KDOT Annual Bus Grant application.

“We apply for this every November, and every year it gets pushed farther back, but this year, we found out in late April we had received the grant,” LaFreniere said. “Our portion of that is $212,679.40 for this year, and the fiscal year begins July 1, so this is for the grant that takes effect then. The federal and state portion is $553,362.60. We’re looking for the acceptance of this annual bus grant with the matching funds to come out of the Economic Development portion of the 1-cent sales tax.”

The commission ultimately approved the acceptance of the grant.

In other business, the commission also approved a request to close Adventure Bay Water Park for the day June 4 in order to host a swim meet for the Piranhas swim team, and also approved the purchase of a 1-ton pickup truck from Chrysler Corner with availability possibly in four months for the Water Department. To conclude the meeting’s new business, the commission also agreed to have a work session Friday to further discuss joining the Seward County Development Corporation.