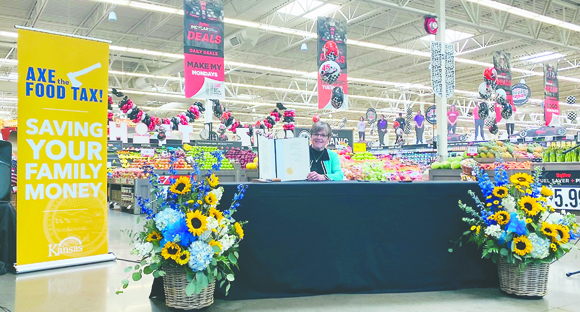 Thanks to some recent action by the Kansas legislature, Kansans will officially see no food tax beginning in 2025.

Wednesday, Gov. Laura Kelly signed House Bill 2106, which will “Axe the Food Tax,” eliminating the state sales tax on groceries. Cutting the food tax will provide Kansans with much-needed fiscal relief, especially as costs continue to rise. House Bill 2106 will completely eliminate the food sales tax by 2025, according to a release from the State of Kansas

“When Kansans needed it most, we were able to bring Democrats and Republicans together to eliminate our state’s tax on groceries,” Gov. Kelly noted in the State of Kansas release. “Because we saved for our collective future, we can now responsibly axe the food tax – all while boosting funding to Kansas schools, roads, and law enforcement. Passing HB 2106 will help Kansans save money, keep Kansas dollars in Kansas, and make the state more competitive with its neighbors. Currently, Kansans pay more for groceries than people in almost every other state due to the 6.5 percent state sales tax on groceries. My administration called on the Kansas Legislature to fully implement the elimination of the state sales tax July 1 of this year, so the benefits of the state’s strong economic growth can be passed on to the people of Kansas immediately.”

Kansas uses the same definitions for groceries as 23 other states. Since many of the stores in Kansas have checkout systems used by vendors in other states with lower state sales taxes on groceries, immediate relief is possible, the State of Kansas release noted.

Discussion of cutting the food tax began late last year, with Gov. Kelly announcing the plans at a Dillons grocery store in Topeka.

“I’m pleased to introduce a plan that will ‘Axe the Food Tax’ and end the state sales tax on food,” Gov. Kelly noted in a November release from the State of Kansas. “For too long, Kansans have been paying more for groceries than people in almost every other state. This legislation will save the average Kansas family $500 dollars or more a year on their grocery bill. Thanks to the fiscally responsible decisions we made before and during the pandemic, we can cut the food sales tax and keep Kansas’ budget intact. This tax cut will put money back in Kansans’ pockets and create real savings for those who need it most.”

“This bill will not only support our families, but also our many hardworking businesses by keeping Kansans from going across the border to buy their groceries,” Lieutenant Governor and Commerce Secretary David Toland noted in the November State of Kansas release. “Under Governor Kelly’s leadership, Kansas is riding a record-breaking upward trajectory in economic development. This announcement will continue that momentum, building a stronger economy for Kansans now and into the future. The bill is possible thanks to the Kelly administration’s commitment to fiscally responsible budget practices over the past three years, causing Kansas’ revenues to come in ahead of estimates, every month, for over a year.”

“With record investment and an ever-strengthening economy, our state is in a prime position to create more opportunity for a better future for Kansas families,” Senate Democratic Leader Dinah Sykes noted in the November State of Kansas release. “Without exception, this opportunity is hindered by the alarmingly high tax on food sales. Eliminating this regressive tax will reduce food insecurity and improve health outcomes for children, all while providing families further financial flexibility to save for a home, education, and emergencies. We have the means to provide direct relief to all Kansans in every corner of the state, and Senate Democrats are prepared to fight alongside Governor Kelly to get this done, once and for all.”

Groups throughout the state praised the plan upon the original announcement in November.

“The Kansas Health Foundation supports Governor Laura Kelly's proposal, which would eliminate the state’s sales tax on food and help Kansas families put healthy food on their tables,” a statement from the Kansas Health Foundation noted. “Kansas has the second-highest sales tax on food in the country (at 6.5 percent), which has been disproportionately affecting low- and moderate-income families for years. While removing the state’s sales tax on food will help ALL Kansas families, it will benefit our low-income families the most, as they use more of their income on basic needs, like groceries.”

"In the breadbasket of the world, no one deserves to experience hunger, yet nearly one in seven Kansans is food insecure,” Kansas Appleseed Thriving Campaign Director Haley Kottler noted in a statement. “The Kansas food sales tax – the second-highest food sales tax in the nation – has always created a regressive, undue burden for working Kansas families who spend hundreds of dollars each year just in taxes on their groceries. It’s past time for the Kansas Legislature to act. As food prices continue to rise, rural grocery stores continue to struggle, and structural racism continues to shape food policy and outcomes, axing the food sales tax is an investment in Kansas families."

“Health Forward Foundation is building the future of our region by addressing social and political influencers that cause health injustices, such as access to healthy and whole foods. For years, Kansans have experienced one of the highest sales taxes on food in the country. Currently, Kansas is one of only seven states that fully taxes groceries at the second highest tax rate in the country,” a statement from the Health Forward Foundation noted. “We support Gov. Kelly’s plan to eliminate the state’s sales tax on food to help every Kansas family afford groceries and put nutritious food on their tables. This plan would save families an average of $500 on their grocery bill every year. Eliminating the state-level food sales tax will have an increased benefit for families with low- and moderate-incomes who experience income inequality by paying a higher share of their income on basic needs like groceries. It’s also a responsible way to deliver for our families without diverting resources from other state services or agencies. We encourage lawmakers from both parties to support this policy. By addressing the most pressing issues in our communities, such as food access, we’re improving living conditions for everyone.”