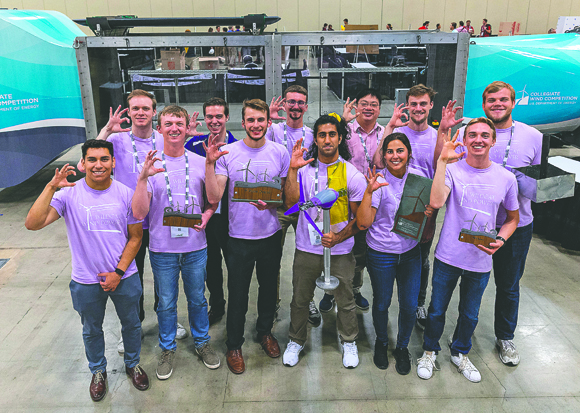 The K-State team battled 11 other schools to claim the top prize in the yearlong national competition. The team designed, built and tested its model wind turbines throughout the academic year before presenting and testing the models in a wind tunnel at the event, which was in conjunction with the American Clean Power Association’s CLEANPOWER 2022 conference and exhibition. “I am so proud of our team’s effort in this competition,” Wu said. “The chief judge was very complimentary of the team’s performance, saying the turbine testing performance was the best he had seen since the inception of the DOE Collegiate Wind Competition.”

The competition is divided into four contests that test the skills of the team on its ability to create a viable model, along with rating the team’s design and presentation skills, its ability to design an offshore wind farm and its effectiveness in wind-related outreach.

K-State placed in the top half of each contest, winning in turbine testing, taking second in turbine prototype, fourth in connection creation and fifth in project development to finish with the highest overall score.

“We developed the turbine early in the fall semester and continued design and testing right up until we left for San Antonio,” said Hayden Dillavou, vice president of the club. “We have our own wind tunnel and workspace in the basement of the engineering building, where we do most of our testing and design work.”

Dillavou said the club is made up primarily of mechanical and electrical engineering students but welcomes members from all majors and backgrounds, including those outside the Carl R. Ice College of Engineering.

The following students are members of Wildcat Wind Power: