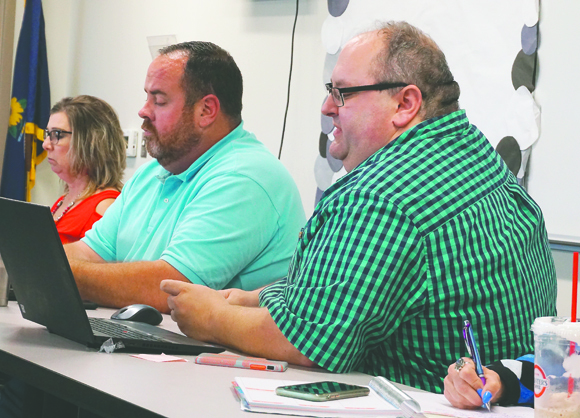 USD 480 Assistant Director of Special Education Dane Parcel, right, talks to the USD 480 school board Monday evening regarding a contract with eLuma for speech and language assistance. The matter ultimately died from the lack of a motion, but will be updated and brought before the board again in the future. L&T photo/Elly GrimmELLY GRIMM • Leader & Times

The USD 480 school board had only a few items to take care of during a special meeting Monday evening.

Up first for the board was discussion of Resolution 06-20-22 concerning the lease purchase for upcoming projects.

After a quick motion and second to approve the resolution, the board took a deeper dive into it.

“I’m all for this, but I did have some questions, and there were a few things I was talking about earlier with Jerry [Clay], because we don’t have solid numbers as far as where we’re going to be at,” board member Alan Brown said. “For example, if it comes in too high to do the brick work, if it’s $3.5 million and we ultimately decide not to do that, it’s a 2 percent penalty to send the money back to them. It’s pretty specific in the contract, and that’s something I was talking to Jerry about because there’s not really a lot of wiggle room in case circumstances change for whatever reason.”

“You would have to go back and pass another resolution saying ‘This exceeded what our projected cost was’ and then you would need to modify this resolution to change the purpose and what’s being done,” Clay said. “That would also require legal counsel to get involved and all of that. If you go over, you have the $5 million ... let’s say it comes in at $5.5 million, if the board wanted to do so, they could fund that last $500,000 out of Capital Outlay. And if it comes under, we’d go to Gilmore & Bell and talk to them about adding something, like maybe a set of computers, just for example.”

“The turf is going to come in pretty close to that expected number, so I think we’ll be really close there, but I think with the other $2.5 million, that will be more up in the air as far as whether that would be the final cost and/or whether we’d be able to do that part of the work,” Brown said. “Or maybe the engineers will also say we need to put up siding or something like that. So the turf I’m pretty confident about, but it’s the brick work that’s kind of concerning me. To an extent, my understanding was once we got the $5 million, we’d have a little flexibility, but I’m now realizing the contract is extremely specific.”

“I would say we’ll cross that bridge when we come to it,” board member Nick Hatcher said. “I would think we’d be able to find something to upgrade that would fit into all of that if something doesn’t quite add up with our projections.”

“And there are projects that are allowed through a lease finance and others that are not,” Clay added. “For example, HVAC unit replacement, or roofing repairs, or a new activity bus, things like that since they’re pieces of equipment. I will admit there are some things that aren’t allowed that I don’t quite understand why, but those are the rules.”

Ultimately, the board voted to approve Resolution 06-20-22. The board also took on discussion of a contract with eLuma Therapy, which would allow USD 480 to meet the speech and language needs of students in the district, After some discussion, the matter died due to a lack of motion due to some changes that occurred shortly before the meeting, but will return before the board at a future meeting.

To conclude the meeting, the board approved a bid from American Bus for a 2021 model year activity bus with less than 20,000 miles. The cost for the bus is $297,635, and will be available in July.

“We had talked about this last year about replacing our old buses, and it’s a need because when repairs were needed, there wasn’t a chassis that could be found, or some other part or another, which ultimately became a problem,” Director of Operations Chad Mease said. “So we started looking and when we put this out for bid, the lone bid from American Bus is what we received. And it’s in pretty good shape, I think it’ll be a good addition to our fleet.”