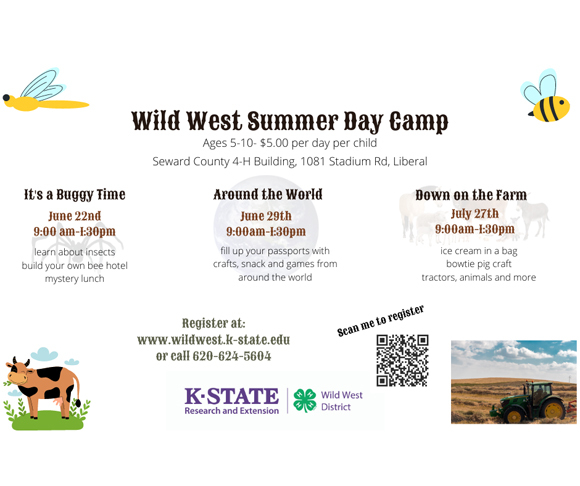 Summertime is officially here, and children and parents are looking for something fun to do.

Kylee Harrison believes she has some great fun for kids. Harrison is the Community Vitality Agent for K-State Research and Extension’s Wild West District, and the district is offering five different day camps, or “Wild West Summer Day Camps,” on five separate days for children age 5 to 10.

The camps are $5 per day per child, a price which includes lunch, a snack and fun activities. All of the camps will run from 9 a.m. to 1:30 p.m., with the first camp coming up Wednesday and running as follows:

This theme dives into the creepy-crawly world of insects. Kids will make their own bee hotel while learning about pollination, see the life cycle of a butterfly and make a hungry caterpillar craft.

A neighboring 4-H’er will be a guest speaker to the group and tell them all about the entomology project in 4-H and explain how to pin an insect. Kids will also enjoy a mystery menu lunch.

Take a tour around the world at this day camp. Kids will get to hear from Wild West District Youth Development Agent Nancy Honig about countries she has visited around the world and discuss their food, customs and landmarks. Children will also learn about passports, maps and flags and enjoy a Mexica food lunch.

The last day camp of the year will be a great farm experience. There are several guest speakers for the day who will show children tractors and lots of animals.

Children will also get to do a craft and learn about germination and growth of seeds, and the day ends with ice cream in a bag.

The Extension office has run day camps similar to this year’s for several years, and when it comes to choosing activities for camps, Harrison this pretty much comes down to knowing what children like to do.

“We try to think of things that might be appealing and fun for the kids, exciting ones,” she said. “If we know of a guest speaker who would be fun to come to talk, we build the theme and the idea around that. If we have an activity we want to do, we work around that. It depends on each one of them.”

Harrison said camp participation normally runs at about 30 kids each year, and she expects similar numbers for this year.

To register for a Wild West Summer Day Camp, go to www.wildwest.k-state.edu, or call the Seward County Extension office at 620-624-5604. Harrison said non-4-H’ers can participate too, but they will have a form e-mailed to them to fill out and return before participating.

“It is $5 per day per child for ages 5 to 10 years old to sign them up,” she said. “We’ll divide them up and get into groups. We have older 4-H’ers and non-4-H’ers who serve as a counselors. Probably half of the counselors  we have this year, they’re not actually 4-H’ers, but they’re kids who have done the day camp since they were 5. They’ve aged out, but they still want to help.”

For more information, call the Seward County Extension office at 620-624-5604. Harrison said she is excited to get the camps started.

“I think we have some really fun activities,” she said. “We have some fun guest speakers, and that’s always a good part of the day to break it up so they’re not listening to us over and over again.”