As Fourth of July approaches, be safe when igniting fireworks 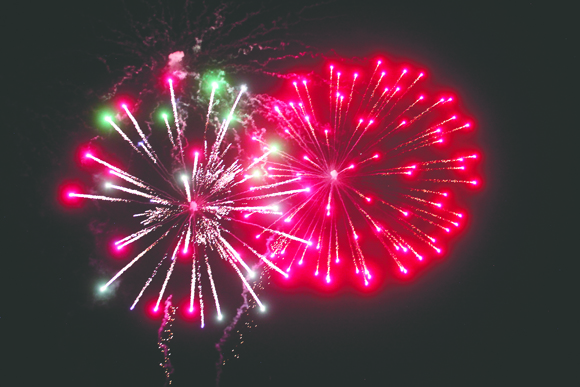 Fireworks are shot off after a past July 4 Bee Jays game. With the July 4 holiday coming up quickly, the Liberal Fire Department advises people to take some safety precautions with their own fireworks displays. L&T file photo/Elly GrimmELLY GRIMM • Leader & Times

The July 4 holiday is rapidly approaching, and for many people, fireworks are part of the holiday festivities.

With that in mind, there are many factors to consider as far as safety.

“Now that fireworks are legal to discharge in the city limits, of course we want people to follow the general safety rules that would go with that. Make sure you're outdoors in an open, safe area under adult supervision, and be mindful of the area around you – if you're in a residential neighborhood and there's a chance of some overlap, ask that person if it's okay to light stuff off and be respectful,”

Liberal Fire Chief Kelly Kirk said. “And there are some areas that are just not good to light off fireworks in because of dry vegetation or it's too close to a group of homes, things like that, so take that into account before going too crazy. As far as safety, follow the manufacturer's directions and light off the fireworks on a smooth, flat and stable surface – a lot of injuries happen because fireworks get tipped over or there's some kind of unstable anomaly on your surface. And if a firework doesn't ignite, DON'T go forth and reignite it because that could cause some serious injuries. Also, have a water source handy, whether it's a garden hose or a bucket of water where you can dunk everything in afterward, and you'll have something nearby in case something goes slightly awry. A lot of it is just basic common sense, if people will just take a little extra time and make a plan, things will go much more smoothly for everyone involved.”

Since the ordinance was passed only a few years ago, Kirk said the holiday has been rather smooth for the fire department.

“It hasn't been too bad in Liberal in regard to fires, we've been really fortunate in that,” Kirk said. “For this year, I had been concerned about weather conditions a few weeks ago given how it had been a long time since we'd gotten any rain, but we have had rain recently to provide that moisture and green things up and help. With the holiday still about two weeks away, I think we'll be in okay shape this year to allow fireworks to be shot off. The biggest complaint we've gotten is with people shooting fireworks far outside the allowed hours, and we set those for a reason. We allow fireworks to be shot off July 1 through 4, with the option of July 5 in case of inclement weather, but unfortunately, some people abuse that and by the end of everything, neighbors are just fed up and can't stand being kept awake at night anymore when they've got to get up in the morning and go to work and do other stuff. We set those hours for a reason, and we ask people to be considerate of their neighbors and respect what we have in place – it's not hard, and again, if everyone will put forth just a little extra effort, the holiday is a lot more fun for everyone.”

Kirk also talked about the highlights of the city ordinance regarding fireworks.

“In Kansas, the only things that are specifically banned – which we have no control over – are bottle rockets and the M80 firecrackers, that's under the jurisdiction of the state fire marshal's office,” Kirk said. “When the firework stands are put up, our inspectors go out and make sure they're selling the legal stuff, so in Liberal, anything you see at a stand is legal to shoot off in town. Anyone interested can find the ordinance on the City of Liberal Web site, it's fully up to date and available for people to read. I hope people will follow the ordinance as far as the dates and times fireworks will be allowed, and we want people to be respectful of those around them when planning. The ordinance allows fireworks to be lit off from 8 to 11 p.m. July 1, 2 and 3, and then from 8 p.m. to midnight July 4, and there is an 8 to 11 p.m. window for July 5. The reason July 5 was built into the ordinance was to allow for inclement weather that wouldn't allow people to shoot fireworks off the evening of July 4. We want people to go ahead and discharge their fireworks and get rid of them instead of storing them in case something happens.”

The fireworks safety advice also extends to the disposal of fireworks, Kirk added.

“What we recommend after shooting off fireworks is moving them to a designated safe area away from anything flammable, like the corner of the driveway or something like that, and leave them until the next morning so they can cool off and be safely thrown away,” Kirk said. “We do tend to see dumpster fires from after July 4 due to improperly discarded fireworks, so that's what we recommend. Either that, or throw them in a bucket of water to extinguish them, keep them in that bucket overnight, and then dispose of them the next day.”

“We've already been hearing from some fireworks vendors and talking to them, they're allowed to start selling fireworks June 27, so they've already got their stock ready to go. With the vendors, there's a pretty thorough checklist for them to follow as far as what they're allowed to sell, etc., and our inspectors go to the vendors and make sure everything's on the up-and-up in that regard,” Kirk said. “The vendors also have signs sharing the highlights of our city ordinance says, so there's definitely transparency there, which is great. All of the vendors who have worked with us in Liberal since this ordinance was passed have been great to work with, they take everything very seriously and do a great job educating customers and making sure everything's within the guidelines and all of that. It's a great working relationship, it makes things easier from the fire department's standpoint. With fireworks being legal, there is an increased possibility of us being called out, but like I've said every year, if people will just work together and keep within the guidelines of the ordinance and be respectful of one another, July 4 can be a great and fun holiday for everyone.”

With the past few years being smooth for the department, Kirk said he foresees the same thing for this year.

“I anticipate things will remain pretty smooth, and my fingers are crossed for that to happen. With regard to fires, we haven't really seen a tremendous increase, but we also haven't really seen a decrease in the number of fires,” Kirk said. “We could go several years without a significant fire, but they do occur, and every year around July 4, there's at least one story on the news about a fire that was started by fireworks. Last year, the state fire marshal's office reported just more than 200 fireworks-related injuries and things like that statewide, and I know that office communicates with state hospitals to get that data. We don't have any special things for that night, we don't upgrade our staffing. With how our model works, we have six firefighters for each shift, so we'll just have our regular numbers as far as all of that. For the public fireworks show after the Bee Jays game, there will be a few of us on hand to provide any assistance, but that's really the only thing that happens beyond our normal operations for that night. We try to pay attention to what all is going on, but we also have to make sure we're not taking on too much, because that will spread us really thin and potentially cause some issues as far as us being able to respond. Locally, we've been very fortunate, so as long as people continue to take those basic precautions and use some common sense and respect, those celebrations can remain safe and fun for everyone.”

Overall, Kirk said, he hopes everyone has a safe July 4 holiday this year.

“We hope everyone has a great July 4 holiday and celebrates it safely. If anyone has any questions, they can contact us at the fire department at (620) 626-0128 and we'll be more than happy to answer any questions or concerns they may have and point them in the right direction,” Kirk said.