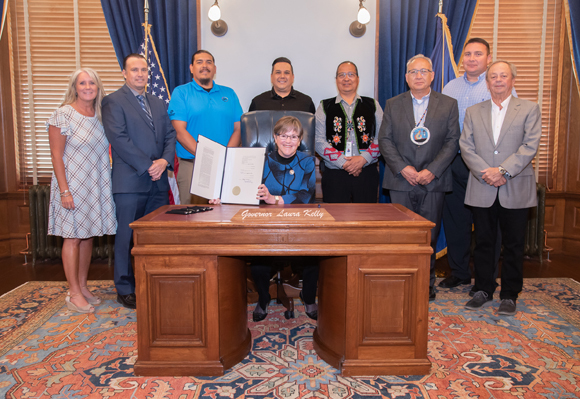 Gov. Laura Kelly holds up a bill legalizing sports betting in Kansas earlier this week. The bill was one of many announcements in June so far. Courtesy photoELLY GRIMM • Leader & Times

The State of Kansas has been bustling lately with a lot of activity, particularly in the governor’s office.

Gov. Laura Kelly has made many announcements about the goings-on of Kansas throughout the month over a wide variety of topics. One of the announcements from earlier this month concerned the State Board of Regents freezing tuition for students of state universities. The Kansas Board of Regents voted to keep tuition flat at state universities during the upcoming school year, something that was able to be accomplished because of the historic level of funding provided by the budget Gov. Kelly signed in May, according to a June 16 release from the State of Kansas.

“As part of her budget, Governor Kelly restored university funding to pre-pandemic levels to enable state universities to freeze tuition and knock down barriers to higher education,” the State of Kansas release noted.

“I’m pleased my call to freeze tuition at state universities has been taken up, especially as pandemic-induced inflation impacts the lives of Kansan students and their families,” Governor Kelly said. “Continuing the streak of low-to-no tuition growth under my administration ensures our state can maintain its workforce pipeline and keep higher education degrees attainable. To make this possible, this administration worked with the Kansas Board of Regents and State Universities to secure $37.5 million that restores their funding and freezes tuition. Additionally, this administration delivered more than $1 billion in funding for higher education, a historic and unparalleled investment in our state universities, community and technical colleges, and private institutions. These investments will make postsecondary education more accessible for all Kansans and advance the state’s economic prosperity.” “Unemployment continues to decline in the state, even as the unemployment rate nationally holds flat. According to the U.S. Bureau of Labor Statistics, Kansas has the sixth lowest unemployment rate in the country relative to other states,” a June 20 release from the State of Kansas noted.

“This administration has worked to ensure that every Kansan who wants a job, can have a job,” Gov. Kelly noted in the State of Kansas release. “I’m proud that we have achieved the lowest unemployment rate in our state’s history at 2.3 percent, more than a full percentage point below the nation’s unemployment rate. We will continue breaking economic records by prioritizing job creation, business investment, and workforce development. Preliminary estimates reported by the Labor Market Information Services division of the Kansas Department of Labor and the Bureau of Labor Statistics show a seasonally adjusted unemployment rate of 2.3 percent in May, a decrease from 2.4 percent in April and a decrease from 3.4 percent this time last year. Meanwhile, the unemployment rate in the United States as a whole has remained at 3.6 percent for three consecutive months, a rate significantly higher than Kansas estimates. Kansas began keeping records of monthly unemployment rates in January 1976.”

Since the start of the Kelly Administration, Kansas has secured 654 economic development projects worth $8,943,214,898.00 in capital investment and has retained and created 43,111 jobs, the June 20 State of Kansas release noted.

Another long-time topic of discussion was also taken care of, with Gov. Kelly signing Senate Bill 84 to legalize sports betting Monday. The bill also allows state casinos to use digital platforms and create sportsbooks, according to a June 20 release from the State of Kansas.

"Soon, sporting events, casinos, restaurants, and other entertainment venues will have another way to attract Kansans to their establishments," Gov. Kelly noted in the State of Kansas release. "Legalizing sports betting is a common-sense solution that will keep Kansans’ money in Kansas. It’s one more way my Administration is working to make Kansas the most pro-business, pro-growth state in the country. SB 84 also allows venues such as restaurants and nonprofit fraternal or veterans organizations to hold sports wagering. The bill also preserves tribal sovereignty, allowing the negotiation of a new or existing gaming compact regarding sports wagering.”