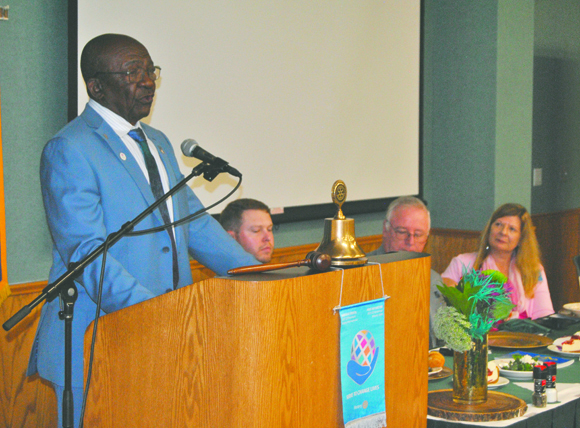 The Liberal Rotary Club is one of 60 in its district. Tuesday, the leadership of the district changed hands, and a local Rotarian is now heading up that leadership.

Liberal’s Ivanhoe Love Jr. was officially announced as the newest district governor for Rotary, taking over the job from outgoing governor Fred Heismeyer, who was on hand for Tuesday’s  meeting at Seward County Community College.

Prior to naming Love as the next district governor, Heismeyer talked about his year as the head of the Rotary district, and he pointed to the hours he and other club members have put into issues such as empowering girls, funded scholarships, distributed dictionaries, meals served, homes built and recreational spaces created, as well as advocating and promoting peace, protecting the environment, digging wells and giving shots.

Heismeyer said all of this is a measuring stick for how Rotarians change lives. He said his year in leading the district has been a memorable one, with he and his wife, Joyce, visiting the 60 clubs in the district and sharing stories of the work Rotary does.

Heismeyer likewise talked about work with fellow Rotarians to wrap Christmas gifts, pack food for distribution to local and international organizations and collect, sort and deliver items for refugees and low-income families.

“We continue to push to educate our fellow citizens on the plight of those caught in human and labor trafficking,” he said. “We have worked tirelessly, I hope, to connect with the more than 2,200 Rotarians we have across the district.”

Heismeyer thanked everyone who made the past year memorable.

“Working as a Rotarian means working as a team, and we have had a great team,” he said.

Heismeyer would later talk about his experiences working with Love.

“My first recollection of Ivanhoe was four or five years ago when our two merging districts came together to begin the process of visioning and strategic planning,” he said. “I had the pleasure of sitting next to Ivanhoe and began to get to know his depth of commitment to service. Since that time, my admiration for Ivanhoe has only grown.”

Heismeyer said Love works tirelessly to help those in need.

“He’s up to his eyeballs and sometimes even over his head in service to this community,” he said.

“He has traveled to meet with clubs and district leadership, and Ivanhoe is working hard to strengthen our area governor team to better support and to provide information to our clubs,” he said. “He continues the commitment of all past governors to connect with fellow Rotarians, engage clubs in meaningful programs of service and support the work of Rotary across the globe. I honestly could not have asked for a better district governor elect to stand beside me on this journey. Our district cannot asked for a more capable and fully engaged governor as we begin to ‘Imagine Rotary.’”

Before handing the mic off to Love, Heismeyer presented the new Rotary leader with the district governor’s pin, and the outgoing governor talked about the significance of that pin.

Love began his remarks by saying he has spent the past two years preparing for Tuesday, and he said his success as district governor is dependent on his fellow Rotarians and their willingness to devote themselves to the causes of Rotary.

“If we can do that, we’re going to move the district forward in such a manner that all of us will be proud of,” he said.

Love later talked about the work of Heismeyer, who he said has put an apparatus in place to help in the recovery and aftermath of the COVID-19 pandemic.

“I’m really proud to step into this position behind him,” he said. “He’s made the road ahead of me much, much smoother. I’m going to be relying on him for his counsel, for his friendship and for being right next to a good bunch of people. You won’t find a better person or people than Fred and his wife, Joyce.”

Later, Love talked about Jennifer Jones, the first woman to be named president of Rotary International.

“She is going to be quite a force within the Rotary world,” he said. “I’ve had the opportunity to meet with her, spend hours with her and understanding what she would like for the Rotary world to do. She has a tremendous responsibility. She’s a Canadian, and she is a world traveler. She is a professional person and capable leader, and we’re very fortunate to have the first woman in the history of Rotary assume that role.”

Love said having Jones as president indicates Rotary’s recognition of the importance of diversity, uplifting women throughout the world and preparing women to assume leadership roles.

Love then asked those on hand what it would take to grow and sustain the Rotary district, and the answer was simple.

“We have to get more members in order to do that,” he said. “We have small clubs in our district struggling to make it.”

“We have to do analysis to figure our what projects within our community will give us the big impact to engage our efforts to make Rotary the club to me,” he said. “We can do it, but it’s going to take commitment from each of you sitting here.”

Love said he is dedicated to the cause of Rotary and trying to help people around the world no matter where they are, the cost or need.

“If we can do things to help make our country a better place, I’m all in,” he said.

America as a whole is divided politically, and Love said something must be done about that divide. He believes Rotary can be the platform to bridge the gap.

“We’re too divided in the country,” he said. “Rotarians are about doing good in the world. We are about helping each other regardless of our political persuasion. We must find a platform where we all can come together for the good of us all regardless of your political background. As Rotarians, let us encourage people in our community. Come to us. We will help you. We have devoted ourselves to helping people no matter what.”