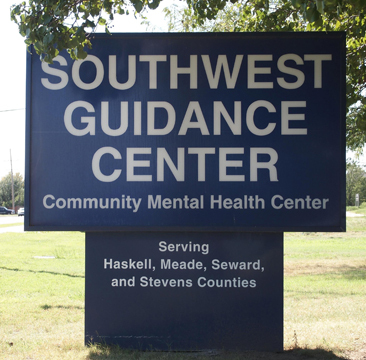 Many changes have been going on at Southwest Guidance Center (SWGC) and in the future, there will be even more changes coming thanks to the work the staff is doing.

A major undertaking for SWGC at this time is the facility continuing to work toward its Certified Community Behavioral Health Clinic (CCBHC) status, a process which started last year.

“The big news in community mental health, in addition to our leadership changes, is we're continuing our work to change SWGC's model of care provided as far as mental health, and that's something that's going on throughout the rest of the state too,” SWGC Executive Director Dr. Marshall Lewis said. “What happened is last year, the State of Kansas passed a law that regarding mental healthcare that has many parts to it, and the part that affects us is the mandate that all 26 community mental health centers in Kansas transition to the new model of care, Certified Community Behavioral Health Clinic (CCBHC). All of the centers have to transition to this model by July 1, 2024 – six centers have already become at least provisionally certified as CCBHCs, and that work is continuing with the other centers in the state. The emphasis of this new model is integrated care, particularly in regard to integrating behavioral healthcare with primary medical care. It focuses on measurable outcomes and a continuous quality improvement model, which means the facility will be setting specific quality goals and documenting progress of meeting those goals as times goes on. We'll have a new sustainable payment system that will replace our current system – right now, in a sense, we're trading hours for dollars, i.e. an hour of care or case management costs a certain amount of money. But under the new model, we'll be trading dollars for outcome measures – when we meet certain quality outcome measures, we'll be paid on those measures regardless of how long services are rendered. In addition, there will be an emphasis on evidence-based practices, which are specifically shown in research to produce outcomes that are being sought.”

So far with that process, Lewis said there has been a lot of work done.

“Our two biggest barriers to implementing the program are a lack of adequate funding and a workforce shortage. With respect to the lack of adequate funding, that means our salary scale is significantly below that of other employers in the area as well as across the state competing for the same employees, and we just can't match the salary scale of some others,” Lewis said. “To attempt to solve that problem, we have applied for our first ever federal grant from the Substance Abuse and Mental Health Services Administration (SAMHSA), which took several weeks and a lot of time and effort from our leadership team. We do think we have some potential of being awarded this grant – we know many other centers are competing against us, but I do think we have a decent chance. If we are awarded this grant, we would be able to, within the first quarter of the grant, bring our salary scale up to a competitive level and we'd be able to offer competitive salaries compared to other employers in the area and across the state. Then after that's done, we'd be able to provide the training for those specific evidence-based programs we'll need in order to reach provisional certification, and that will ultimately be followed by full certification as a CCBHC. We're waiting to hear back from the feds regarding that grant, and we should get word in August or September.”

Lewis added the information that needed to be gathered for the application was quite extensive.

“We had to give a little bit of everything and then some with this application. We had to give them some history of the center and how long it's been part of Liberal and some more specific details as far as the demographics we serve and the services we already offer,” Lewis said. “With CCBHC, there are nine core services, most of which we already provide to an extent, and with the others, we would just need to bring that up to a higher standard. We needed to demonstrate what we've been able to do already for the past 50 years, and how we have the capability to continue providing those services and adding others. They also reviewed our entire budget top to bottom and where some of the deficits were, and we also put together a proposed budget for the next four years, with which we had to specify how the money would be spent each year and what measurements would be used to show we're spending the money properly. We also had to come up with a list of policies to be put into place – currently, all SWGC policies are in accordance with state statutes, but as we move forward in this federal grant program, there are some additional policies that would need to be put in place.”

Even with everything that has already been done, Lewis said there is still plenty more to do not only with the grant application, but the rest of the CCBHC work.

“There are nine core services we'll need to have covered, and there's quite a bit of work to be done to get all of those fully implemented. The first service is crisis mental health care and crisis emergency mental health care – we already do that, including the 24-hour emergency screenings we do through our community partners but moving forward, we'll need to make some expansion happen with that, including adding more staff and things like that,” Lewis said. “Another service is screening assessments and diagnoses for mental illness, which we also already do through crisis planning and risk assessment and all of that. Another service is access to mental health care, which we've been doing for 50 years, so that's not new, but what will be new is, coupled with that, there will be outpatient substance abuse treatment available, which is something we haven't done before. And that's something not required for the grant, but it is a requirement for the CCBHC certification. Another service is outpatient primary care screenings, which will screen for things like diabetes and various other general medical screenings that will be done for all the patients receiving medications – we've done some of that, but with this, it will become more of the norm and part of the routine, and with that, we hope to catch some things that might not otherwise have been noticed. Some of the other services, we already provide them through our case management program and other parts of what we do. We'll be adding peer support services, which is another thing we've never done before, so we're excited about that, and we'll also be adding intensive community-based mental health care for veterans. We already see many veterans in routine outpatient care, but this will deepen that program so it's more specific to the needs of those veterans and that culture. This isn’t meant to be an overhaul of everything, this is taking what we're already doing and adding some ways to make them stronger and go deeper.”

Overall, Lewis admitted, he is excited to see the work continue.

“In the initial phase of this, which started around March, we were very excited about getting the grant application done. Along with that, we've also passed a new strategic plan that focuses on a number of things, but the main goal with that is to achieve CCBHC certification and continuing seeing patients and continuing that progress,” Lewis said. “Our leadership team is also seeing some particular progress with other work going on around the facility, which we're all very proud of. Our current main effort is to go back and reconnect with community partners and get back into the normal swing of things and we'll continue to track the progress with our grant application. SWGC has been here for several years already, and I think we have a very bright future. A lot of people are chomping at the bit to get things done and help our patients and at the same time, some of the changes we want to implement will take a couple years to do so.”