Avalon pulls out in front of Harley at Clay intersection 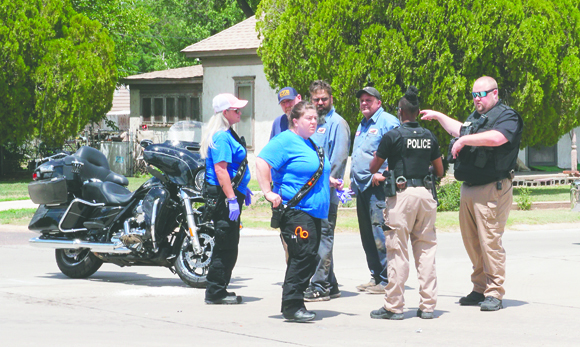 Emergency personnel respond to the scene of a vehicle vs. motorcycle accident at 1st Street and Clay Avenue Tuesday afternoon. Ultimately, a citation was issued to the driver of the vehicle for failure to yield the right-of-way at an intersection. L&T photo/Elly GrimmELLY GRIMM • Leader & Times

Traffic saw a bit of a delay in town Tuesday afternoon as the result of an accident.

Emergency personnel were called to the incident shortly before 1 p.m. Tuesday at West 1st Street and South Clay Avenue.

“Upon arrival, officers found a 2016 Harley Davidson, driven by a 43-year-old male, was traveling south on Clay Avenue when a black 2015 Toyota Avalon, driven by a 31-year-old female, drove across 1st Street in front of the Harley Davidson, causing the motorcycle to strike the Toyota on the driver’s side door,” a release from the Liberal Police Department noted. “A citation was issued to the driver of the Toyota for failure to yield the right-of-way at an intersection.”