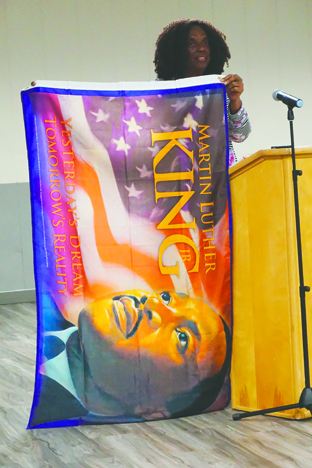 Presephoni Fuller shows a Martin Luther King Jr. flag to the Liberal City Commission at the commission’s June 14 meeting. The flags are set to be flown the weekend of Martin Luther King Jr. Day, and the project of getting the flags has been quite the undertaking. L&T photo/Elly GrimmELLY GRIMM • Leader & Times

Future Martin Luther King Jr. Day holidays in Liberal will be seeing more color thanks to a recent project by local citizens.

As coordinator Presephoni Fuller tells it, the project has taken quite a bit of work.

“The inspiration behind this project was as I was doing some research, I volunteered to lead this team and I noticed we didn’t have a lot of information about Martin Luther King Jr. Day celebrations in Liberal, so I had to do some digging,” Fuller said. “As I went through the MLK Foundation, I realized 2023 would be the 40th anniversary of the bill being signed to make Martin Luther King Jr. Day a holiday. With that in mind, and with next year marking 40 years since that, I figured we had to do something special. We’ve done marches nearly every year during my time in Liberal, and I thought it would be great to do something we’ve never done, so I talked with my team about whether or not it would be possible. Then I went to the Liberal City Commission and talked about that, and the next day, Brad Beer spent about 30 minutes working to find the right flag we could use. With the flag we’re using, it’s fully licensed and only a certain amount of people are allowed to make it, with the proceeds going to the MLK Foundation for the legacy to continue. We requested the weekend leading up to MLK Jr. Day, and MLK Jr. Day, for these flags to fly, and we want generations to see the legacy of Dr. King continue.  We’re putting up 40 flags in town, and we want them to be up for that entire weekend to remind people to never stop dreaming and encourage the younger generations to leave a legacy of something bigger than themselves.”

One of the purposes of the project, Fuller added is to extend to multiple generations.

“This is so much bigger than us, and I don’t want people to think of MLK Jr. Day as just a day off, I want them to remember how we got to this point in history because those who don’t pay attention to history are doomed to repeat it,” Fuller said. “We put some materials together to give to people, and our mission statement is ‘A dream for unity, freedom and justice,’ and my daughter created our logo, which is a torch. And the torch is significant because the torch of passing on this information and educating people about why we do what we do continues to this day, and I want to see it continue. We set up an account at Golden Plains Credit Union for the purpose of raising money to get these 40 flags and recently, we were blessed with a very generous donor who bought the flags for us, which is amazing. We still have to purchase the poles for the flags and some other items that will help with mounting the flags on the poles in town. With the account at Golden Plains, that is still open and anyone who wants to donate even just $1 can do so. These flags remind us of freedom and even in the most tumultuous times in history, the truth is marching on and we’re continuing to celebrate freedom and justice for all people. We’re all dreamers and we should do all we can to keep Dr. King’s dream alive of unity, freedom, justice and liberty for all.”

Fuller said the project kicked off earlier this year.

“We had our first preliminary meeting in February, but we decided to wait until after Black History Month was finished to really get things going, so we had our first meeting in March, and then shortly after that was when we went before the Liberal City Commission and talked to them about our plan,” Fuller said. “We all brought our own ideas and thoughts to the table, and we ultimately coming up with a good plan. My concern with the MLK Jr. Day March is not enough people know it’s happening, so we want to cast a wider net. These flags will be flying that entire weekend, and we want that to be a tradition every year, and we want to expand our team so it’s more representative of the community and so we have more voices and ideas. Another concern of mine is literacy, and since I sit on the advisory council at Seymour Rogers Middle School, I was shocked to see those scores as low as they are, so I think this is a way to keep literacy alive along with Dr. King’s dream. The library does an amazing job putting up its Black History Month and MLK Jr. displays, and we want to expand on that by doing what we do and continue educating people in the community.”

The first flag recently came in the mail, a moment Fuller said was stunning.

“I was so happy, and it was such a ‘WOW’ moment because his picture is so distinct, and the background on it is absolutely stunning. And at the bottom of the flag, it says ‘Yesterday’s Dream, Tomorrow’s Reality,’ which is something really special and can apply to everyone because if you can dream it, you can do it,” Fuller said. “I’d love to see us build some partnerships with people in the community and other places to keep expanding this, because I want Liberal to be a place known for making history. The rest of the flags should be here within the next few weeks, that’s something I was very insistent on when I ordered them, because I want everything to be fully ready to go for that weekend instead of us waiting and waiting to order them and then hoping they get here in time. I’m watching all the plans for the July 4 parade come together, and for the next MLK Jr. Day march we do, I want to see it be a massive collaboration of people in the community just like that. Another project I would like to see happen in the future is I would like to see a bust of Dr. King put up somewhere in the community, whether it’s in the library or in one of the parks, because there are no African-American figures recognized in any of the parks in town, so I would love to see something like that happen. We have the Mid-America Air Museum dedicated to aviation, but we don’t really have a museum of arts and sciences where people can go in and see something like that, so that recognition is something else I’d like to see in the future.”

Fuller added work will continue as far as spreading the word about the project.

“Social media has been great to work with, and we’re going to be passing out our brochures in the future for people to look at. We’re getting ready to put together our official Facebook page so people can see the updates and everything else we’re doing, and there’s also going to be a lot of word of mouth going on,” Fuller said. “We want to have events and activities throughout the whole year, not just in January and February, because we want to be a part of the community, and there are a few things we’re working on right now that still need a few details smoothed out as far as what we want to do and who in the community we’d want to partner with. Dr. King has been celebrated in Liberal for more than 30 years, and I would love to see the community continue celebrating his life and work, and there’s so much I’ve learned in my research I’ve done with this project. I just want people to continue to support what we’re doing, we want to make a difference and a positive impact on the community not just at certain parts of the year, but year-round. Our goal is to be an example of unity, freedom and justice throughout the year, because that’s something that happens every day. At whatever level you want to be involved in, get involved, there’s nothing stopping you if you really want to get involved, and never stop dreaming.”