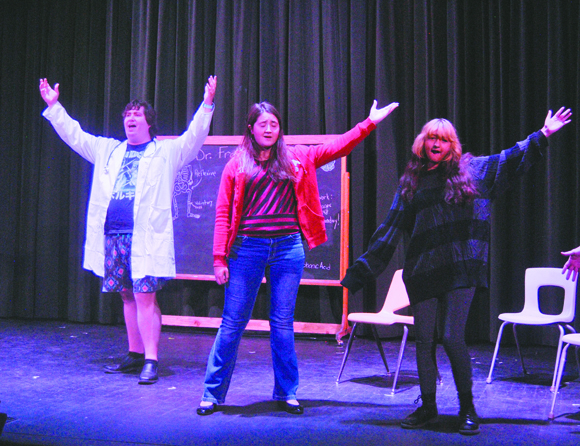 Cast members of the upcoming Rainbow Players production of “Young Frankenstein” sing one of the opening numbers to the musical at a recent rehearsal. The show will run nightly starting at 7:30 p.m. Thursday, Friday and Saturday in the Showcase Theater. L&T photo/Robert PierceROBERT PIERCE • Leader & Times

Based on Mel Brooks’ hit 1974 film, “Young Frankenstein” centers on Frederick Frankenstein, who recently inherited a castle in Transylvania from his grandfather and faces a dilemma.

As part of that dilemma, Frankenstein must decide whether he will run from his family’s tortured past or stay in Transylvania to carry on his grandfather’s mad experiments reanimating the dead.

This coming Thursday, Friday and Saturday, the Liberal community theater group, Rainbow Players, will bring “Young Frankenstein” to life on the stage of the Showcase Theater at Seward County Community College.

It is when Frankenstein travels to take care of his grandfather’s estate when he meets Igor, Inga and Frau Blucher before the team of characters begin to create a monster.

“It’s the aftermath of that and the chaos that ensues and him finding his way between his tortured past and wanting to look at science versus crazy monster type stuff,” Rainbow Players President Maddy Sander said.

Rainbow Players each year hosts a summer production, and although she gives the story a PG-13 rating and advises parents not to bring children, Sander did say “Young Frankenstein” was chosen this year because it provides some humorous relief from the seriousness of real life.

“The world could use a laugh right now,” she said.

Sander said the adult humor of “Young Frankenstein” gives it its PG-13 rating, but for those who do watch it, the laughter and the music will make it worth while.

“The story, the laughter, the comedy, it’s a nice respite from some of the serious things that are going on in the world right now,” she said. “You can come to the theater, enjoy a good laugh, enjoy a fun evening. It is a good time to do something that brought some levity.”

The character Igor is traditionally played by a male actor, but for the Rainbow Players production of “Young Frankenstein,” local performer Jessica Malin was chosen to play the part.

Malin has performed in several other Rainbow Players productions, and Sander said her brand of comedy fits the role of Igor quite well.

“There’s no specific place where they’re saying ‘he’ at this point,” she said. “They just talk about Igor. It is one of those things that feels a little more androgynous in the way it presents itself. I’ve seen multiple casts that have taken this and had a female Igor, and it was the right fit with the people we had audition.”

Sander said few, if any, adjustments needed to be made to make Malin’s part happen.

“She is a fabulous actor and works very well with the group we’ve got going here,” she said.

Sander said Malin’s performance promises to provide side-splitting humor for those who come to see the production.

“She has a way to make you laugh,” she said. “She makes my job easy. She immediately understood this character from the moment of auditions.”

Playing the lead role of Frederick Frankenstein is Timothy Smith, who is fresh off his performance as William Barfee in the SCCC Drama production of “The 25th Annual Putnam County Spelling Bee.”

Alongside Smith will be Perryton, Texas, student Caleb Jones, new to Rainbow Players, and he will be playing Frankenstein’s monster. This is one of Jones’ first times on a stage, and Sander said he has taken quite well to the monster’s role, particularly when it comes to the tap dance his character performs to the Irving Berlin classic, “Puttin on the Ritz.”

“It was the first time he had tap shoes on, and within an hour, he was doing a dance move,” she said. “It’s super fun to see. I took tap in college for a year, and our monster is able to do what I could not accomplish in a year after an hour of having tap shoes on. It’s an absolute treat to get to see.”

Of course, having music by a famous composer was a huge feat, and integral, for the local production, and Sander said she had to go through a few hoops to make it happen.

“They are very specific about the fact it’s there, how it’s used, what it’s allowed to be and our contracts for the rights to this, so we made sure to make it dazzle,” she said.

Smith, Jones and Malin are just part of what Sander said is a talented cast.

“We’re bringing back for the summer Amira Coleman, who audiences have seen in ‘Sister Act,’” she said. “She’s frequented the stage since she was young. She’s moving on to grad school after this, so we’ve been lucky enough to have her for this show.”

Playing Elizabeth Benning is Rebecca Shade, owner of Downtown Dance Academy, who will also be doing the show’s choreography. Another Rainbow Players veteran, Glenda Patterson, will perform the role of Frau Blucher.

Returning to the summer production is another veteran, Gary Collins, who will play the hermit, and Inspector Kemp will be played Aaron Hardin.

Sander said audience members need to come with an attitude of being excited, not easily offended and ready to laugh and take everything with a grain of salt, which will make for a fabulous time.

“This script is quite funny,” she said. “Rather than thinking of it in as a typical traditional golden age musical, think more about going to a comedy show. Some of the jokes, you take with a grain of salt, but if you come with an open mind, you’re going to have an absolute wonderful time, laugh out loud and enjoy the talent we have on the stage.”

The Rainbow Players cast and crew have had a slightly shorter time to practice this year, but despite this, Sander said practices have gone well.

“I’m so proud of this cast,” she said. “We always do the second week of July, but July 1 was a Friday. They’re hitting the ground running with that. We ended up having to start a week and a half later than we have in the past. They’ve really put this together within about four weeks’ time.”

Sander contributed the success of practices to having more available cast members than Rainbow Players has had for recent productions.

“They’ve come,” she said. “They’ve been here. They’re putting in that work. It’s a shorter timeframe, but they’re booking it towards the finish line. It’s a treat to see. I’ve got a great group of kids and adults who are coming together and creating some really cool art for you.”

Sander said she has a passion for community theater, and this adds to her excitement for the upcoming production.

“It gives people an understanding of human nature in ways they won’t be able to experience in other capacities,” she said. “It’s a great medium to showcase talent, express yourself, learn more about yourself as a person, understand how relationships work with each other and laughter. The joy of getting to do comedy and bringing that to life is wonderful.”

During the COVID-19 pandemic, Rainbow Players was not able to do a full scale show, and Sander said it is beautiful to come back to the stage with the excitement the current cast has had and having the crew being able to pour themselves back into theater.

“It’s a lot harder when you haven’t done it for a while,” she said. “You turn into a well-oiled machine when you do this frequently. There’s that itch to come back on to the stage and bring art back into life and excitement back to the community with supporting the arts. I’m always excited to bring theater to the masses, and we hope you’re just as excited to come back and enjoy the stage again.”

Rainbow Players’ “Young Frankenstein” will hit the Showcase Theater stage nightly starting at 7:30 p.m. Thursday, Friday and Saturday. Tickets for seniors 65 and older and children 12 and younger are $10 and $14 for adults. Sander said there are many avenues to purchase tickets.

“You can always call Trina Fosdick,” she said. “We have a new box office provider. We have now the ability to take credit cards online. You can order your ticket online. Make sure it’s in hand, ready to go. If you go to rainbowplayers.org, there is a ‘Buy Tickets Now’ button that will take you right to our box office site. You can reserve your tickets, make a donation if you’d like to, reserve exactly what you need, all of that information right online. It’s encrypted, safe. If you want to sign up for any information on upcoming shows, it has the ability to do that there as well. Our cast members currently have tickets for the next week. If you’re interested in getting it from any of them, swing by and see me at the (Saints) Bookstore.”

Fosdick can be reached at 620-655-5934. Sander said using that number and the rainbowplayers.org site can also provide show fans with more information, as can the “Rainbow Players/Liberal Community Theatre” Facebook page and “Rainbow Players” group page there.