Soon it will be time to have FUN at the FAIR 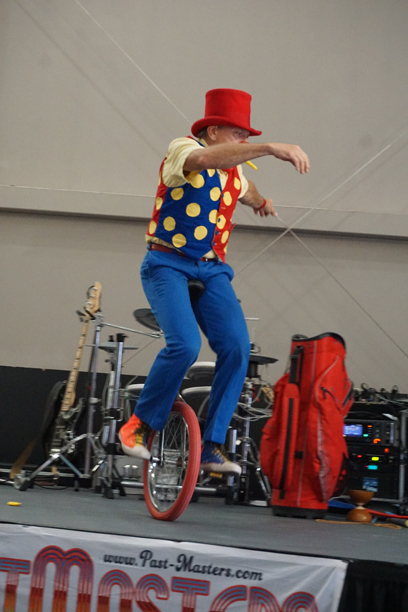 Clown Richard Renner does a trick during his show at last year’s 5-State Fair. This year’s fair is scheduled for Aug. 18 through 28, and Fair Board President Ty Lewick said there will be something for everyone to enjoy. L&T file photo/Elly GrimmELLY GRIMM • Leader & Times

August is here, which means before too long, people in Seward County and the surrounding areas will soon be making their way to Liberal for the annual 5-State Fair and all the different festivities.

As 5-State Fair Board President Ty Lewick tells it, there is plenty to be excited about with this year’s fair fun.

“The fair this year will run Aug 18 through 28. That first weekend, Aug. 18 through 21, will be all the carnival festivities, and everything with that will be behind the Seward County Activity Center again, like last year. It so happened there was a breakdown in communication – the schedule got changed for the carnival, and we didn't realize it, so they're actually coming the week before all the other fair activities, some of which will overlap with the rodeo weekend. I think that will benefit both our organizations a lot. Aug. 22 is when the 'normal' schedule will start, and that's when the quilt entries will be entered and judged. Aug. 23, the Seward County 4-H will have their entries and judging, and that's also when the Open Class entries will start being accepted and turned in. Aug. 24, we'll finish up with the Open Class exhibit entries, and they'll be judged that evening. Aug. 25, the Seward County Activity Center will open, and that's where the vendors and exhibits will be for the people, and the participants can see what ribbons they got and everyone else can see all the different entries, but there will not be vendors there yet.”

And the fun does not stop there, Lewick said.

“Aug. 26, starting at 5 p.m., that's when the exhibits will open and the vendors will be in the Seward County Activity Center, and we're teaming up with KSCB-The Legend this year for a summer show similar to their holiday show and spring show. With that show, so far, we have more than 30 vendors signed up to be there, and we're aiming for about 40 to 45 vendors total, there are still a few we're waiting to hear from as far as whether they'll be able to make it or not. Aug. 26 is when we'll start getting into the main part of the fair, that's when the 4-H livestock shows will be going on, and that night is when the vendors will be open, and there will be several acts to take in, including the Flying Debris variety show, then the Crazy Boy Coy fire circus show (and he's amazing), and the Fair Queen crowning will be happening that evening at 8 p.m., I know our current queen, Aspen Jaramillo, is excited to turn the crown over to the next queen. That night will also see the Tate Stevens concert going on in the Grandstands, he's a great country music act. Aug. 27 will be a bit of a repeat, that's when all the livestock sales will be taking place and the round robins and all of that, and that's also when we'll be having our Kids' Day, that will be from 12 to 4 p.m., and that afternoon will also feature iceless ice skating in the Seward County Activity Center. The Quilts of Valor ceremony will be at 12:30 p.m. that day in the Seward County Ag Building, and that evening will be our Norteño Fest in the Grandstands, that will be starting at 7 p.m. and will feature five Hispanic bands. That day will also have two cornhole tournaments going on, both with a $1,000 grand prize, so we're hoping both of those will draw a lot of people. Aug. 28 will be the last day, that's when everything will wrap up and the last chance for people to see the different exhibits and everything else going on.”

Lewick said planning for this year’s fair festivities has been going on since last year.

“The Norteño Fest was a big thing we knew we definitely wanted to have. We knew we wouldn't be able to bring the monster trucks to the fair this year due to scheduling conflicts, so we did those in June, and ultimately, we knew we wanted to bring musical acts back to the fair and the Grandstands again,” Lewick said. “One of the things we're excited about – and we didn't realize this at first – is as we've been working through the change in scheduling, having the carnival the week before everything else, will actually be beneficial. I know it's not conventional, and we typically have the carnival going on at the same time as the other fair festivities, but since the carnival is the weekend before school starts, it's one last hurrah before all of that officially gets going and it's the children's chance to go a little extra nuts and maybe stay up a little later without having to worry about going to school the next day, which is a good thing. Then during the fair, especially for the concerts, parking will be a lot better because we'll have the Seward County Ag Building parking lot fully open for people, whereas in the past, that's been where the carnival is and parking's a bit of a bear for people. There's a lot of fun stuff that will be going on, and there are a lot of great acts that will be performing, so there will be something for everyone.”

Another thing Lewick said the Fair Board is excited to bring back is the 5-State Fair Queen crowning.

“We're excited to be able to have the crowning again this year. Aspen was the last 5-State Fair Queen crowned, and that was in 2019, and not only that, she was the last one crowned while the Soroptimist Club was in charge of the 5-State Fair Queen competition, so that's really special,” Lewick said. “We weren't able to have the fair back in 2020 because of COVID-19 and everything else, and there were some circumstances last year that made us cancel the crowning. This year is the Fair Board's first year organizing the 5-State Fair Queen competition, and we've got four young ladies who have entered and should be starting their fundraising very soon. And the competition is also a scholarship competition, so we're excited to continue that tradition.”

A new part of the fair Lewick added coordinators are excited for is a collaboration with KSCB-The Legend.

“We're excited to be teaming up with KSCB-The Legend for a summer/fair show and bringing in more vendors to that, so we're excited to see how that all turns out. We'd started talking to them about the show around April, and they agreed they'd talk to some of their regular vendors about setting up at the fair,” Lewick said. “With the show, not only will it be exposure for those vendors, it's also going to be a great chance for the 4-H participants to show off their work and let people see it, and it's always good having more eyes on that stuff. We're all about the community and bringing everyone together. And with it all being in one central spot, that's also great for everyone so they won't have to go from building to building.”

Overall, Lewick said, there should be something for everyone at this year’s 5-State Fair.

“Everything's a little more spread out compared to past fairs, so it's not like people will have to rush, rush, rush between everything, they can take their time a little more. They can spend that first weekend at the carnival, and all the exhibits and animal shows and concerts are on different days that next week, so they can really have fun at whatever they happen to attend,” Lewick said. “And almost everything is free, I know there are a couple of things that have a low cost, so it's not like there will be any price gouging or anything. We're really excited about everything that will be going on for this year, and we hope to see a lot of people at the fair!”