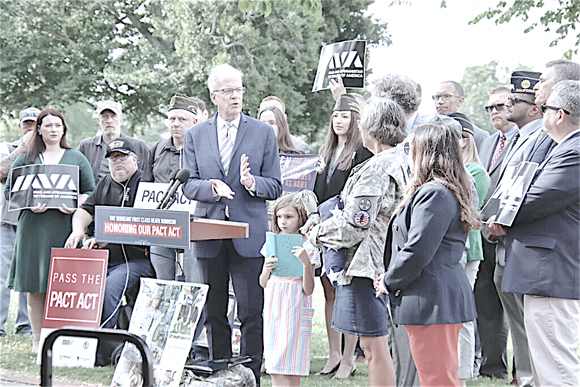 Veterans suffering from the effects of toxic exposures while in service will now be receiving assistance.

Tuesday, the U.S. Senate passed the Sergeant First Class (SFC) Heath Robinson Honoring Our Promise to Address Comprehensive Toxics (PACT) Act of 2022 with a vote of 86-11. This historic and bipartisan legislation was introduced by U.S. Senators Jerry Moran and Jon Tester (D-Mont.) – the ranking member and chairman of the Senate Veterans’ Affairs Committee. This legislation now heads to the President’s desk to be signed into law, according to a release from Moran’s office.

“This is an historic moment for our nation’s veterans,” Moran noted in the release. “Sen. Tester and I made a commitment to get to this point today, and despite procedural hurdles, the Senate took consequential action to provide all generations of veterans their earned health care by passing the SFC Heath Robinson PACT Act. Thousands of veterans who answered the call to serve after the terrorist attack on 9/11 suffer the health consequences of exposure to open burn pits. Many of these veterans are simultaneously experiencing a battle with the VA to gain access to the health care and benefits they desperately need. This legislation will provide comprehensive relief for all generations of veterans, from Agent Orange to the 3.5 million post-9/11 veterans exposed to burn pits during their deployments. Our nation’s veterans and their families will no longer have to fear being turned away from the VA for illnesses related to toxic-exposures. Thank you to SFC Heath Robinson’s family and all the veterans and advocates for their input and commitment to get this long-overdue bill passed through Congress. I urge President Biden to quickly sign this legislation into law.” This legislation passed the Senate with a vote of 84-14 in June, but was amended with a technical fix in the House of Representatives which required an additional vote in the Senate.

“The SFC Heath Robinson Honoring Our PACT Act will deliver all generations of toxic-exposed veterans their earned health care and benefits under the Department of Veterans Affairs (VA) for the first time in the nation’s history,” the release from Moran’s office noted. “For more than a year, Sens. Moran and Tester led negotiations between Democrats, Republicans, House Veterans’ Affairs Committee Chairman Mark Takano, Ranking Member Mike Bost, the Biden Administration, Veterans Service Organizations and advocates. Sergeant First Class Heath Robinson deployed to Kosovo and Iraq with the Ohio National Guard. He died in 2020 from toxic exposure as a result of his military service."

Among its many priorities, the SFC Heath Robinson Honoring Our PACT Act of 2022 will:

B) Create a framework for the establishment of future presumptions of service connection related to toxic exposure;

G) Set VA and veterans up for success by investing in:

“As leaders of the Senate Veterans’ Affairs Committee, Sens. Moran and Tester have long been dedicated to identifying a path forward for unaddressed toxic exposure issues alongside Veterans Service Organizations AND remaining committed to delivering comprehensive relief to all generations of toxic-exposed veterans,” the release from Moran’s office noted.