Improvements being made to prepare for the fair 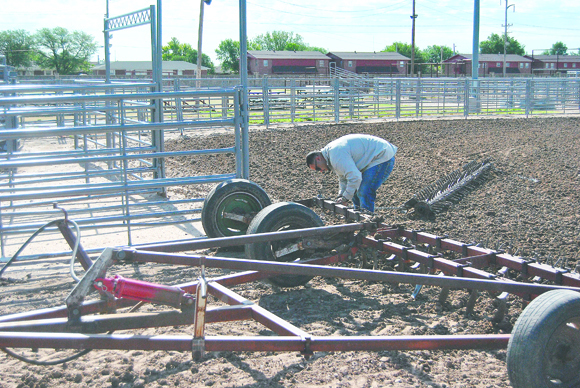 A worker at the Seward County Fairgrounds makes some adjustments to his plow before continuing smoothing out the rodeo arena for the upcoming PRCA rodeo and Five State Fair. L&T photo/Robert PierceROBERT PIERCE • Leader & Times

Events take place year-round at the Seward County Fairgrounds, and this month will feature two of the more well-known events the facility hosts each year.

The Seward County PRCA Rodeo will bring its eighth edition to the rodeo arena Aug. 19 and 20, and the following week, the Five State Fair is in town.

Fairgrounds workers have been busy prepping the facilities for these upcoming event, and Activity Center Director Linda Johnson said much work has taken place in the rodeo arena itself.

“We moved all the hay bales over there,” she said. “They started from the race track over there all the way around and on the south side of the fence where those hay bales were there. That has all been moved. We’ve been staining fences. Keeping the moisture in the rodeo arena and on the track has been very hard this year to be able to work it.”

As far as the race track in front of the grandstands, Johnson said she has learned a few tricks about keeping it and the neighboring rodeo arena hydrated amidst the drought-like conditions persisting in the area.

“I learned from a guy who coaches over at Goodwell, Okla., we have to dig it deep,” she said. “When we get it dug deep, we start putting more moisture in it, and we start backing off of it and get the arena worked. We worked the race track for the monster truck show that came in June.”

Johnson said keeping the race track watered is important because many rodeo contestants use the track to exercise their horses.

“We have to have that just enough where it’s not going to hurt the horses,” she said.

Recent history has shown rains tend to come close to when rodeos take place at the fairgrounds, and in the past, that meant lake-like conditions in the area leading up to the arena. Johnson said often water would be in place for as much as two weeks, but with a little work, that problem has been fixed.

“We leveled that off ourselves,” she said.

With a little research, Johnson was able to make use of the hay bales once in place at the arena and race track.

“With some of the bales of hay, I read on the Internet where you could make a base and make it where it was strong where it would hold,” she said. “That’s what we did there. It’s been nice. It hasn’t held water there.”

Of course, fairgrounds workers have been keeping up with routine issues such as spraying for weeds and mowing, alternating between the Activity Center and the rest of the fairgrounds, but Johnson said work such as bringing mats into the Beef Barn to get that building set for the fair has been done as well.

“We got that set up, and now, we have to set up some pins for the goats and the sheep,” she said. “We’ve been cleaning all the livestock pins, the hog pins, the chicken pins. We’ve been cleaning all that out, getting it ready to go. We’ve got with the fire department. They’re going to come shoot water in the pig pen chute to make sure we’ve got some drainage there. They’re going to shoot the show arena.”

In the Ag Building, ceiling tile has been replaced, and existing ducts were removed.

“I think the ceiling turned out really nice,” Johnson said. “We did all that work ourselves.”

An ongoing issue for the fairgrounds, Johnson said five major water leaks have taken place this year, and they are currently working on another one.

“We dig it,” she said. “We plumb it. We have a plumber that works down at the jail. When we get stumped, he comes in and helps us, or sometimes if he’s not able to come and help us and we have nowhere to go, we call the city. They come out and explain to us what we need to use and sometimes sell us the parts for it.”

No matter the issue, Johnson said keeping the fairgrounds up to date is simply continuous maintenance.

“We’ve got things that break,” she said. “We had somebody run into that gate. We don’t know how it happened. We had to cut that completely off, reweld, straighten it out. Now it’s back up and looks good.”

Part of this year’s fair is a summer show hosted by KSCB, and some of what Johnson and her workers will have to do is move showcases from the Ag Building to the Activity Center for that show and the fair’s exhibits.

A few years ago, a storm did damage to bleachers at the rodeo arena, and since then, new bleachers have been sought. Johnson said new seating will eventually be obtained, but it most likely will not be this year. There will be adequate seating for this year’s rodeo, though.

“I know the city is going to bring in the bleachers like they did last year, and that’s what we plan on using this year for the rodeo,” she said.

In addition to the PRCA rodeo, the fairgrounds Aug. 18 through 21 will likewise see a carnival, which will run nightly from 6 to 11 p.m.

“We can’t really touch anything in here until we know the setup from KSCB,” she said. “We’ll have to bring showcases across the street from the Ag Building. That’s where we store them. We can’t push them over, and we can’t bring them over by tractor. So we have to bring them by trailer, and it’s usually only two we can get on a trailer. There’s quite a bit of moving back and forth.”

Workers too will have to set up booths for the KSCB show, and as of Wednesday, Johnson said 45 booths had already been sold for the show.

A budget for fiscal year 2023 has yet to be passed due to an upcoming public hearing that could see the exceeding of the Revenue Neutral Rate set in the proposed budget put together in July. Johnson said as part of that budget, in her capital improvement plan, she asked for 60 additional cattle panels.

“The ones we’ve got, they’ve been here for years,” she said. “They’ve been broke. They’re rusted. Some of them, we can use them damaged, but some of them, you can’t. I pulled out and counted the best I could, and I figured  60 would give them a good start. There’s just things that get tore up and you have to replace and fix.”

The lack of precipitation has also added to the sprinkler system problem at the fairgrounds.

“We’ve had to run them longer, but we’ve had a lot of sprinkler head breaks we’ve had to work on,” Johnson said. “We had one that kept flooding. We kept looking at it. We’d change the sprinkler head out, and we’d do this, and we’d do that. We’d shut it off for some days, and we turned it back on. Guess what? We had to dig that whole yard up over there because we had a line break.”

Case numbers for COVID-19 have drastically declined recently, and public events are once again becoming commonplace. Johnson said events at the fairground have been quite popular, so much so, the remainder of 2022 is filled.

“We had a lady come in who wanted to book an event,” she said. “The only thing we had left was weekend in November. Now, they call for 2023. We’re almost completely booked there.”

Johnson said this means people have already been calling for 2024, but nothing can be booked as of now.

“What I have to do is I have to turn all my other stuff like Pancake Day, the fish fry, the college auction, all we know is going to be here, we have them over and put them in that year and make sure with them that’s going to meet their schedule before we can book anybody else on that year,” he said.

Even with just a little time left before the rodeo and the fair, Johnson said work will continue right up to the moment those events happen, during the events and after they are done.

“We just get ready for them from week to week and clean and here we are,” she said.

That work will include a wall to a shop right behind the grandstands, which Johnson said she has been working on for quite some time.

“We had it sandblasted, and I’m still not pleased with some of the paint,” she said. “Those windows, people bust them out all the time, so we’ve got some plans to cover those up with where we think it would look nice with what we’re going to do to the wall.”

Johnson said the Beef Barn at the fairgrounds gets scraped and painted every year, and with paint peeling right off, that work has yielded little in the way of results.

“I’m going to get with  Sherwin Williams and find out what we need to do,” she said. “That’s just a waste of money if we keep scraping and painting and not figuring out what the problem is.”

As part of a grant, after the fair, Johnson said the fiberglass windows in the Activity Center will be replaced.

“They are shot,” she said. “We had a guy come in from, I think, Wichita to put the windows in back in 1988 and inspected them. He said they’ve been beat with the sun. Everything’s just been deteriorated on them, and he said it was time for them to go.”

Johnson said she wanted to use part of the grant money to get new roofs for livestock pens, but there will likely not be enough money to accomplish this.

“There’s so many people who put in for the grant,” she said. “We were blessed to get the two things we wanted. We’ll figure out what we’re going to do on those roofs. If we have to do it here and there, we’ll get it done.”