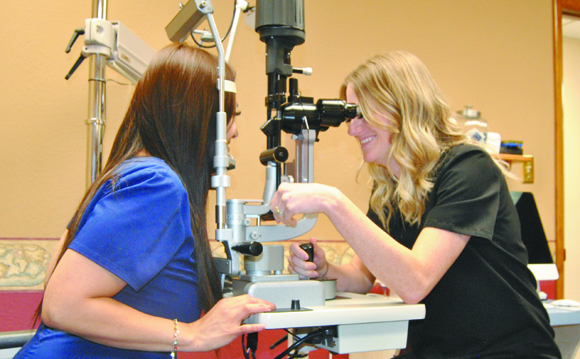 A local eye care center has been helping people see better for more than two decades, and in 2021, Vision Source of Liberal became Radcliff Family Eyecare.

Dr. Rhiannon Radcliff and her staff recently celebrated the first anniversary of taking over the practice at 2136 N. Kansas Ave. Radcliff, who had previously worked for Vision Source for five years, sees patients for many vision problems, including eye exams, diabetes, glaucoma and other eye diseases, as well as for contacts and glasses.

Radcliff Family Eyecare is still a member of Vision Source, and Dr. Radcliff said the primary difference is the name.

Radcliff attended optometry school at Northeastern State University in Tahlequah, Okla., with four years each of undergrad and grad work, and she has been at the Liberal practice since.

“I worked for Dr. Graham at Vision Source here for four years and bought the practice from him and have been here for a year,” she said.

Radcliff said her love of optometry came from a desire to go into the medical field. “Living out in the rural area, we get to see a lot of cool things the cities don’t because they go straight to the ophthalmologist,” she said. “We get a lot of metal in the eye. We’ve got a lot of welders and farmers.”

Radcliff said she even sees the occasional cancer in the eye, and she does some of the more basic services provided with eye care.

“We do glasses,” she said. “We do contacts, general eye exams, the diabetic eye exams. We check for high blood pressure in the eyes, cholesterol in the eyes, red eyes, all the eye diseases, glaucoma, macular degeneration, cataracts. Anything eye related, we do it, and if it’s needed, we send off to the specialist.”

It is well known diabetes is high on the list of causes for blindness, but Radcliff said other conditions can cause problems with the eyes as well.

“High blood pressure does the same thing,” she said. “It can affect the eyes if it’s out of control. We can see that and the cholesterol if they’re out of control.”

“We take VSP, EyeMed, Blue Cross Blue Shield,” Dr. Radcliff said. “We take the National Beef. We take the Seaboard insurance. We take Medicare, Aetna. I’m sure I’ve missed some, but people are also welcome to call the office anytime. The girls will look it up to see if we take their insurance, but those are the main ones.”

Radcliff Family Eyecare is open from 8 a.m. to 5 p.m. Monday, Wednesday, Thursday and Friday. It is also open from 1 to 7 p.m. Tuesdays for patients who appointments after 5 p.m.

Just as its name implies, Radcliff said her practice aims for a family-like atmosphere for its patients.

“We strive for friendliness,” she said. “We want good patient care. We want people to feel comfortable here. We try to be positive and enjoy working together. I hope we can take care of people and make them feel good about getting their eyes checked, and we like to do families. We’re all about the kiddos and the older people, all ages.”

To make an appointment, call 620-624-3841, or go to www.radclifffamilyeyecare.com. Walk-ins are also accepted.

Dr. Radcliff said her staff is always ready to help patients pick out a pair of glasses.

“They keep our frame rooms stocked, and they’re really good at picking out all different styles for different ages,” she said. “They’ve got lots of hip stuff up there. They’ve got all the new styles. We’ve got them for all ages.”