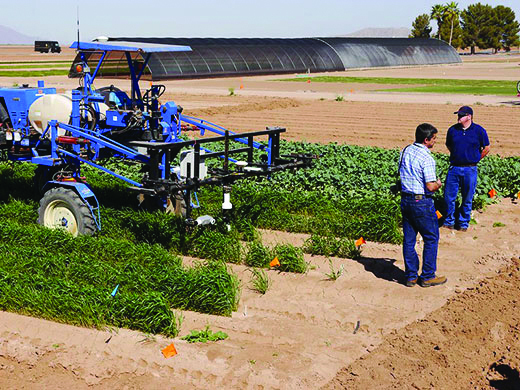 MANHATTAN, Kan. – Among the many issues farmers must balance when planting or harvesting crops, one would think that the sun’s energy is not one of those.

That’s because Griffin – a precision agriculture economist with K-State Research and Extension – has studied the potential impact of space weather on agriculture, and specifically how solar flares and other activities in the solar system affect GPS signals to farm equipment.

The bottom line: “Space weather does impact our ability to use GPS for agricultural purposes,” he said.

In fact, in a paper now available from K-State’s Department of Agricultural Economics, Griffin concludes that U.S. farmers stand to lose big if they no longer have access to GPS technology, also known internationally as Global Navigation Satellite System (GNSS).

“If we assume that we lose GNSS access for an entire year, it could be a billion dollar loss in efficiency just for the Midwest,” Griffin said.

The agriculture industry has evidence to show the effectiveness of using GPS monitors on planting and harvesting equipment. Decades ago, Griffin notes, farmers would use visual row markers to guide those two chores.

“GPS guidance was cheaper than having physical row markers,” Griffin said. “It became one of those technologies that was just a good idea.

“Fast forward to today and we have planters that are really big and we do not have markers on those. So what would happen if we did not have access to GPS on the day we are trying to plant?”

The answer: “We would have inefficiencies. We can still do some things, but just not as efficiently. Add all those (inefficiencies) up across large regions, and it becomes a lot of money.”

Griffin admits there is nothing that humans can do about events on the sun, or other space phenomena that affect satellite signals, so the most sensible approach for farmers is to plan for the unexpected.

“Ask yourself, ‘how would I do things if I did not have access to GPS? And do I have a Plan B?’” Griffin said.

“I’m not suggesting farmers go out and buy row markers for all of the 48 row planters out there, but I am suggesting having a conversation with their partners, service providers, manufacturers and dealers about things they can actually get done if they don’t have a GPS (signal).”