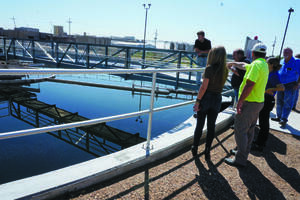 The Liberal community finally has a new wastewater treatment plant up and running, and community members had the chance to see its inner workings at an open house Friday.

As City of Liberal Engineer Pete Earles tells it, the project has been a long time coming.

“Discussion of a new wastewater treatment plant started around 2012, and even before that, back in 2005, we'd been working with National Beef to figure out how to do a plant for the City of Liberal AND the National Beef plant,” Earles said. “We went back and forth for years and years looking at and coming up with different options based on what we had heard worked in other communities, but ultimately, we came to the conclusion a joint plant just wouldn't work. National Beef's needs are just so much different from the City of Liberal, and combining the two simply wouldn't have been feasible. So we got to work on a solo City of Liberal plant, we signed the contractors on in 2012, and the project was then put on hold AGAIN because there were a few things that still needed cleared with National Beef. But we finished the design, went out for bids in 2019, started construction at the end of 2019, and the plant is now complete basically two and a half years later.”

With the project finally seeing completion, Earles said there was a lot of relief and positivity in the air.

“The guys were really happy when the new treatment plant project was approved, they were fighting with the old plant all the time trying to keep things like they were supposed to, and again, the overall maintenance was just becoming a real pain,” Earles said. “The old plant was also out of compliance, and there was no way it was going to be able to be brought back into compliance. As we looked at the construction of everything, we were digging some REALLY deep holes – the soil around this area is extremely sandy, so we had to dig down about 30 feet and then some to make sure all of that was how it was supposed to be. There were some other challenges we had to deal with since the plant's right on U.S. Hwy 83 and close to some other stuff, so we didn't really have as big an area as we would have liked when we were starting the construction.”

Earles added there are several benefits the community will see from the new plant being in place.

“The effluent of the plant is almost completely clear, and the big advantage of the plant being just for the city is there are no chlorides being used, so we're able to reuse the water that comes through,” Earles said. “We'll also be able to use some of that to irrigate the ball fields and the golf course, and being able to reuse that water will ultimately save the city millions of gallons of water every year as opposed to continuously pumping from underground. That reuse of water is a big benefit of the new plant and will allow a lot. We'll also be saving $1 to $2 million per year in repairs. At the old plant, which was roughly 40-plus years old, it seemed like every time anyone turned around, there was a broken pump or some other part needing replaced or repaired, and it was becoming VERY costly doing all of that work. The maintenance will be much simpler, and the plant will operate at a different method since a lot of it will be electronically controlled and the employees will be able to see what's going on from those hubs, whereas with the old plant, there were dials and knobs and levers that had to be adjusted for everything, which took up a lot of time. We have sensors and all of that in place and better tracking and all of that, so it will be much easier to keep up with maintenance, and it will ultimately help make the water a much better quality. With Arkalon Park, there will be a vast improvement seen with the lake water out there since we'll now be shipping water out there, and the fish and other wildlife will be much healthier.”

Overall, Earles said, there was a lot of work to be completed to finally make the new plant come to life.

“We had to do the original designs and architectural plans and zoning and all of that, which also had to be presented to and then approved by the city commission and other entities. Then with the actual construction, there was a lot of excavation that had to be done, and then we had to pour everything and put all the basins and clarifiers and sludge storage facilities in place, and those are all cast concrete,” Earles said. “Another challenge was figuring out how things should flow and also the aforementioned challenges with the sandy soil. The last major thing as far as construction was finished earlier this summer, and there are still some small odds and ends that are being attended to as far as making sure the electronics are fully operational and ready to go and small things like that. But the majority of the work got finished earlier this summer. After everything was done, we were all really happy and relieved and glad to know the plant was actually done and ready to go. We expect this plant to last about 40 years or so, it won't be going anywhere for a while.”

So far, Earles said, the plant is running very smoothly.

“The plant itself is operating really well, the biggest issue is there are a few low-flow areas in the plant, and then there are the other remaining odds and ends that are being worked on. Overall, we're really happy with how the plant is running, everything is working like it's supposed to,” Earles said. “With maintenance at the plant, once all the small kinks are worked out, everything will run much more efficiently, and it will allow the employees to be able to concentrate on the plant and making sure everything's working like it should as opposed to the other plant where every day brought something new that needed fixed. They'll be able to concentrate on the actual work and the treatment.”

After spending so much time and manpower on the project, Earles said he is pleased with how everything ultimately turned out.

“We're really pleased with how this project turned out, it was a great cooperation between the City of Liberal and the contractors and everyone who worked on the plant and making sure everything came together like it was supposed to,” Earles said. “Our director, Jesse Randle, is also fantastic, he has experience with this type of system, so that really helps since he's basically one step ahead and can also train other people on how everything works. It was a great project and I'm glad everyone was able to work together so well.”