Board approves YouScience for 2 years 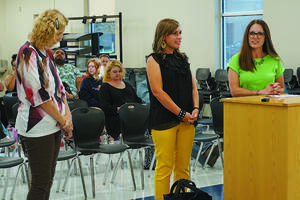 The USD 480 school board kept things very short and sweet for its most recent meeting Monday evening.

The evening began with some remarks from local citizen Reita Isaacs.

“To begin, I did take the board’s advice and wait a couple weeks before making appointments to see Ruben Cano and Dr. Carter, and those meetings ended up being very informative,” Isaacs said. “I was able to talk to Mr. Cano in his office and we ended up having a nice visit. I explained some things I’d been trying to get across to the board, and he listened, he listened really well since he’s heard a lot of those concerns before. With some of my concerns, he advised I talk to Dr. Carter, so I made an appointment and I went to his office for that and he was very gracious and I had a nice visit with him as well. I talked with him about some of the things I’d brought up before, which he was aware of. Dr. Carter told me he would be able to get me the information I needed, and he was able to do that, which I’m really grateful. I’ve also talked to several teachers, past and present, and some of them will like the answer and some won’t. One teacher I talked to said she went with all of this and after I asked her why, she said it had to do with child development and said it was partially the parents’ fault. I asked her why that was and she said ‘It’s because they make the children walk too soon,’ to which I replied ‘You can’t MAKE a child walk – they pick it up on their own time, just like crawling.’ Something else I found out is after you do the testing for preschoolers and kindergarteners, how they determined if that particular student learned to crawl right, and what would be done if that didn’t happen right? During that conversation, I realized a comment I had made at a recent meeting regarding you not answering questions from the public was very degrading and disrespectful to you, for which I apologize. So I’m not going to approach the board anymore, because I know it’s not going to do any good. But I do appreciate my conversations with Mr. Cano and Dr. Carter and the information I received.”

After the administrator reports, the board later moved on to new business, beginning with discussion of YouScience.

“YouScience is the aptitudes, skills, and career exploration tool we have been using the past two years in the middle schools and at Liberal High School, and it meets the career exploration and planning component of the Individual Plan of Study required by the Kansas State Board of Education,” Cano said. “It helps the students determine what pathways they might be interested after they graduate and goes from there. This particular deal we’re looking at is for two years.”

Ultimately, the board voted to approve YouScience for two years in the amount of $17,005. Technology remained a topic for the board with discussion of ALEKS.

“At the middle schools, we’ve been looking at our math intervention, and last spring, the middle school principals looked at some different programs that could help with that,” Cano said. “This program we’ve chosen, ALEKS, identifies students in need based on test scores and some other criteria.”

“Has the placement already happened with this?” Board President Naomi Vargas asked.

“We have already identified students who need help, and they are already enrolled,” Seymour Rogers Middle School Principal Jason Diseker said. “We’ll be able to fill all the slots, and something that’s handy about ALEKS is if there’s a student who can’t do it on a certain day, we can bump up another student and have them in that spot. It’s a great way to have extra direct instruction for the students using it, and since it’s web-based, it can be used at home if needed. Overall, I think it’s a great program for us to use.”