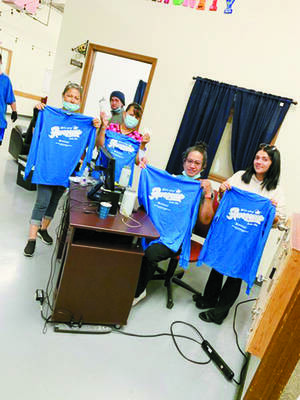 Mosaic’s direct support professionals show what awesome looks like, as they are the heart of helping people Mosaic serves to have meaningful lives. Courtesy photoROBERT PIERCE • Leader & Times

Thanks to care provided by DSPs, those people can live the lives they want and stay active in their communities.

This career is challenging at times and often not glamorous, yet DSPs provide the support that makes accessing basic human rights possible, including going to school, getting a job, and participating in their community.

DSPs are an integral part of life for IDD clients, and their tireless around-the-clock commitment ensures their clients receive the care they need. Each DSP’s hard work makes a profound impact and enables people to lead independent and fulfilling lives.

“We wouldn’t be able to have any of our quality outcomes without the direct support staff and professionals,” said Vickie Harshbarger, community relations manager at Liberal’s Mosaic office. “They really do the heavy lifting of the agency. They support the person served in their homes. They help them achieve their goals. They assist them in going to community activities. Everything from being out in the public to the intimate personal needs is what the direct support professionals do.”

Sept. 11 through 17 was DSP Recognition Week, and the local Mosaic agency joined others across the country in honoring and thanking those who provide vital services.

“They deserve so much more, but we do at least take one week to thank them for everything they’re doing,” Harshbarger said.

Many fun activities took place during the week, including Pajama Day, Hat Day, Appreciation Gift Day and a day for clients and Mosaic workers to wear gear featuring their favorite sports team.

Harshbarger said Liberal’s Mosaic office team has the advantage of knowing their clients well, and this makes weeks such as last week even funner.

“Everybody can join in,” she said. “We had a special food day, where Gail Phelps, our nurse, did the cooking. We had cheesy potatoes, green beans and steak, brownie bites. Everybody’s been fed very well today, and food day’s always very popular.”

The week’s fun also included long sleeve T-shirts which said, “This is what awesome looks like,” along with water bottles.

“Monday, the senior leadership staff all signed ‘thank you’ cards for everybody,” Harshbarger said. “We handed those out too.”

Harshbarger called DSPs the heart and soul of Mosaic.

“Without them, we wouldn’t exist,” she said. “The people we serve require that support, whether it be as simple as helping them figure out their finances and making sure they have transportation to places. It can be as simple as that to the full 24 hour a day care some of the individuals require. That’s everything from their bathing to their feeding. We run the whole gambit.”

In this way, Harshbarger said Mosaic’s staff is very diversified.

“We don’t require people to have a CNA, but at the same time, they’re doing a lot of that same job of helping people with those needs they have,” she said.

As with most jobs of its kind, Harshbarger said being a DSP takes a special kind of person.

“It takes someone who definitely has the heart for servitude and wants to get to know people and develop relationships,” she said. “People we serve know pretty much right off if you’re here just for a job or if you’re here because you really care about them. The ones who are here to really care about them, what they can accomplish is amazing. Everybody who we serve has a plan we talk to them about, and we discuss with them what their goals are. It’s up to the direct support professional to help them achieve those goals.”

Harshbarger said DSPs are patient and caring, and they know the people they serve well.

“If somebody is just a little off, they’ll be able to tell us if there’s a change of condition, and they need to get them to the doctor,” she said. “They need to go to an appointment for their mental health care. They are definitely that front line of helping the people we serve.”

Along with being the heart and soul of an organization like Mosaic, Harshbarger said DSPs are the key factor in any community-based service.

“We couldn’t do anything without them,” she said. “The community-based services would’ve never gotten off the ground without them.”

Harshbarger is also the CRM for Garden City’s Mosaic office. She began working at Liberal’s office in July, and she said in both communities, DSP levels have shown similar trends before, during and after the COVID-19 pandemic.

“Unfortunately, we’re all in that same boat,” she said. “That doesn’t really change. We’ve always had difficulties finding the right person to fill the DSP positions, and the pandemic definitely didn’t help us at all. Like a lot of the other industries around town, they’ve seen the availability of staff really decline. We’ve seen that same decline.”

Before the pandemic, Harshbarger said Mosaic would likely see five to six applicants a month for the DSP position, and up until recently, that number was down to one or two.

“That really does hurt us,” she said.

Help with the problem came earlier this year, though, with the passage of Senate Bill 267 by the Kansas Legislature. The law included a 25 percent raise for providers of help for IDD individuals.

Harshbarger said this helps Mosaic stay competitive with other workplaces when it comes to wages.

“Once we are able to receive that funding, it will be even more so,” she said. “We’re hoping that can help us recruit the right person for the job. It’ll at least put us on a more level playing field.”

Leaders of some health care facilities have said fear has played a part in recruiting workers following the pandemic, as many fear case numbers will rise again, making working in such facilities more difficult than usual. For Harshbarger, she said the fear factor, unfortunately, is here to stay.

“I’m no expert on COVID at all, but I do know we are still very mindful of it,” she said. “Health and safety of those we serve is most in the forefront. If there’s a spike in the community numbers, we back off on those community activities and try to heighten the protocols here at the agency.  When numbers are good, we try to be more community involved. We have to go with the flow. It’s one of those things. We’re going to have to learn how to manage it.”

Harshbarger said Mosaic did not experience a higher rate of turnover during the pandemic, but she did say both for DSPs and their clients, the time was one of isolation.

“We didn’t have day services open, so people were staying at home,” she said. “The DSPs, instead of coming to work here, they just went to the houses. They only came in contact with the two or three other professionals who were at that home instead of being able to have the group setting.”

Harshbarger said a lack of gatherings and in-person meetings added to the feeling of isolation for both Mosaic workers and clients.

“It felt a little bit like an island,” she said.

Despite this, Harshbarger said the care DSPs provided during the pandemic continued, and she praised those efforts.

“We still appreciate that one-on-one care they provided,” she said. “They really were the people’s lifeline.”

Harshbarger even went so far as calling the level of care provided during the pandemic brilliant.

“Normally, during day service, we have cards, we have games, we have different activities to do,” she said. “They took that and took it into the homes so during the day, there were activities to do instead of just sitting there watching TV. They actually did things with the people. On nice days, they would make sure they’d gone outside for a while.”

For IDD individuals, Harshbarger said the key to well being is bring a sense of normalcy to an abnormal circumstance such as the pandemic.

“By having crafts and games in the home, it didn’t feel quite so different as everything was,” she said.

Overall, Harshbarger said DSPs are everything for IDD individuals.

“It is amazing for me to watch the individuals out here interact with direct support professionals,” she said. “They have their favorite staff. They’ve got their friends. They’ve got the ones who they know they can go to, and they’re going to do everything in their power to help them with whatever it is they’re doing that day.”

Harshbarger said she also likes seeing these interactions and the feeling of family at Mosaic.

“When you go through the day services here, it doesn’t feel like you have staff and individuals,” she said. “It’s everybody together doing things, and that is amazing to see.”