Who owns the bridge? Answer determines who fixes it 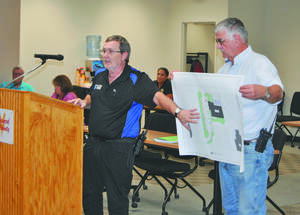 EMS Director John Ralston, left, and Emergency Management Director Greg Standard present engineering plans for a possible new EMS building at last week’s special county commission meeting. After the special meeting, the commission had its regular meeting and approved amending an agreement between the county and an Ellsworth-based engineering firm for plans and payment for those plans for making upgrades to the Kismet bridge. L&T photo/Robert PierceROBERT PIERCE • Leader & Times

The Kismet bridge, which crosses the railroad tracks on Road T just west of U.S. Highway 54, has been a problem for some time.

Much of the problem lies with who has ownership of the bridge, with leaders from both Union Pacific Railroad and Seward County claiming the other has ownership.

The issue of ownership is necessary when considering who is responsible for repairs on the bridge built in the 1930s. County commissioners took a step in the right direction at last Monday’s regular meeting toward solving the problem.

“Before you this evening is an agreement drawn up for the engineering services between Seward County and Kirkham, Michael & Associates regarding the Kismet bridge,” Administrator April Warden said to the commission.

Warden reminded commissioners they had authorized her to move forward with engineered plans for the bridge with the Ellsworth-based engineering firm Kirkham, Michael & Associates.

“Originally, we thought the cost would be around $80,000,” she said. “After they came out, looked at everything, knew what’s going to be involved and everything they have covered in that agreement would be included in the agreement. They are saying it’s going to be $105,000.” 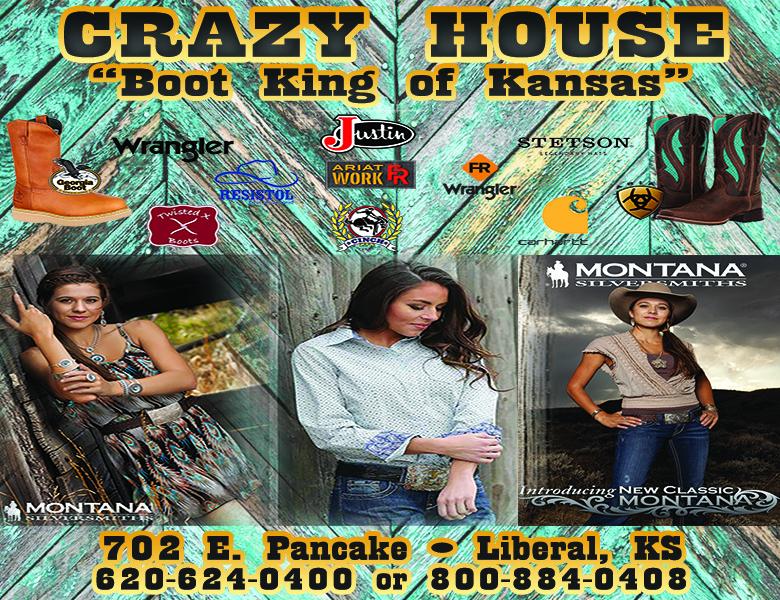 Warden said commissioners had also originally agreed to pay for the plan out of the county’s Road and Bridge Special Highway Fund. She said Legal Counsel Nathan Foreman had reviewed the agreement with Kirkham, Michael and requested a few changes and modifications, which were made.

Warden said this will allow the county to move forward with engineering plans, open conversations with the Kansas Department of Transportation and Union Pacific for funding for the new bridge.

Warden said she had conversations with commissioners Steve Helm and C.J. Wettstein, both of whom brought key points to the issues, and in addition to discussions with Foreman, she too communicated with officials with Kirkham, Michael.

“Originally when they did the agreement, they refer to Seward County as the owner throughout the agreement,” she said. “In the first paragraph, you will notice it says, ‘It is assumed the new bridge will be paid for, owned and maintained by the owner.’ Both parties have agreed they can take that line out.”

Warden said the line was removed so the county could move forward with engineering plans and to determine whether the railroad or the county will build a new bridge and own it. She said the county owning the bridge would allow entity leaders to apply for funding for the project.

“I understand you guys may not be at a consensus on how you want to move forward with that,” she said to the commission. “I am in discussions with both. Nathan has told me he had discussions with KDOT in the past, and they have explained to him they will not help us with any funding avenues if we are not the owner of the bridge.”

Warden said Foreman and Kirkham, Michael feel UP officials will to do the minimum in terms of work needing to be done if they do anything at all.

“We’re probably not going to be satisfied with what we’re trying to get out of it, but they can’t tell us that for sure,” Warden said. “What I can tell you for sure is I have no engineered plans, and you are not the owners of the bridge. I cannot apply for the funding opportunities they have out there right now for the bridge. Also, nobody can guarantee when we might be able to have a meeting with the railroad.”

Warden said Kansas 125th House District Representative Shannon Francis has been quite active as well in trying to pursue railroad leaders on the project.

“He felt confident once we had a set of plans, he could arrange a meeting with Union Pacific and KDOT,” Warden said. “Kirkham, Michael feels the same. They feel once we have a plan, we can approach them with a plan and see what we will have to do.”

Warden said Kirkham, Michael officials informed her getting a meeting with the firm takes a great amount of time.

“You get passed around to a lot of different individuals, which is what I’ve experienced so far in trying to work with them,” she said.

Warden then reviewed what had happened prior to Monday’s meeting.

“This bridge was built in 1938,” she said. “We did go to litigation with the railroad in 2004 to get them to do something to the bridge at that time. That took us having to file against them, and it ended up going before a court to get them to do anything.”

Warden said if the commission would like her again to pursue litigation, she could do so.

“I just feel if we really want to get somewhere, we need engineered drawings first,” she said. “They can work with Nathan Foreman to change the language in here.”

Warden said both Foreman and Kirkham, Michael officials agreed when an owner is talked about in an agreement for engineering plans, the term likewise refers to the owner of the project, and in the original agreement, Seward County was referred to as the project’s owner.

“They did agree having that line in there could be misconstrued, so they’ve agreed they can take that out of there,” Warden said. “If you’re wanting them to look for new language that doesn’t even say owner in here, the two parties can work on some other kind of language you want in the agreement, but Kirkham, Michael, without an agreement that we’re going to pay to do engineered plans, are not going to continue with our engineered plans until they know Seward County’s agreed to $105,000 for engineered plans.”

Warden said commissioners were going to have to make decisions about whether or not the county was simply going to pursue UP for responsibility of the project.

“That takes a whole new direction we’re going in, and I cannot tell you how long it will take us to get a bridge in place,” she said. “Another concern Kirkham, Michael has is because this bridge is owned by the railroad, it has not been inspected. I think we’ve all expressed our concern with people traveling over that bridge in the shape that bridge is in. That is something else we need to consider. It’s my job to bring all the information to you guys and for you guys to give me direction for how you want me to proceed.”

Wettstein said he would like to see the phrase  referring to the assumption of payment, ownership and maintenance by the owner struck from the agreement.

“I think Seward County is coming up with engineered plans to expedite the possibility of getting some money,” he said. “I feel I didn’t want Seward County to be the owner, but doing the plan to try to move it on.”

“We need to get going on this,” she said.

Warden said documentation from 2004 shows the county is in the same position now as it was then.

“There’s not a possibility of getting money from KDOT,” Wettstein said.

Warden said she had asked state lawmakers about a bipartisan infrastructure bill passed earlier this year that could help with funding.

“They told me they would check to be absolutely certain that infrastructure bill was not passed to allow railroads and people to get money for infrastructure,” she said. “That was based on municipalities, cities, counties, tribal people to be able to get money to fund their infrastructure needs. If the bridge remains in the ownership of the railroad, they are not available for the funding options we have right now available to us to get funding for that.”

Warden said she spoke with Foreman before Monday’s meeting, and the legal counselor told her the commission could  take action at the meeting giving Warden permission to sign the agreement after both sides were comfortable with the changes, but if commissioners wanted to see the agreement again, she could have something ready for the board’s Oct. 3 meeting.

Wettstein said he was willing to give Warden permission to sign the agreement if attorneys could make the changes requested.

Commissioner Nathan McCaffrey made an initial motion to approve the agreement with the condition Warden not sign it until language was changed to reflect that Seward County is not the owner of the bridge.