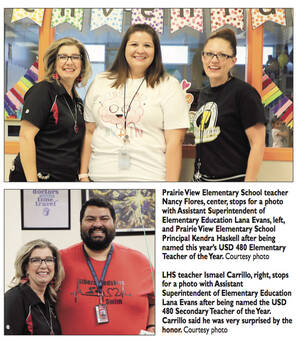 The teachers throughout USD 480 do a great job every day working with their young charges and recently, the recipients of the annual Teacher of the Year honors were announced.

“It was a couple weeks ago, I was sitting down with a student and helping them out with some homework, and then Lana Evans and Carter Kruger came in with a bunch of balloons and some other stuff,” Carrillo said. “I originally thought it was all for the student I was working with, like it was their birthday or something, but then they told me 'No, we're actually looking for YOU' and then they told me I'd been picked as the USD 480 Secondary Teacher of the Year. I was really surprised about it all. Before I came to LHS, I spent six years working in Guymon, and when I got here, I realized I wanted to work here more long-term and focus on teaching and being there for the students and helping them with their work and everything else. When they told me, I was a bit in shock because I didn't fully believe what was going on and I thought they were playing with me.”

“Late last month, Assistant Superintendent Mrs. Evans, our principal, Mrs. Haskell, and several coworkers showed up during our live morning announcements to surprise and congratulate me in front of my students!” Flores said. “Honestly, I was in complete shock. I had no idea how to process it. All I could think of at the moment was, 'Please stop recording' since I am not very comfortable with being in that kind of spotlight.”

Both Carrillo and Flores have been teaching in USD 480 for multiple years.

“This is my sixth year teaching in Liberal. I teach Honors Geometry, Algebra III and this year, I'm also teaching General Math for students who need extra help,” Carrillo said. “And for the General Math class, that's the one I find I'm doing the most work for because I'm so used to teaching the upper-level math classes and then to work at that level, it's just a different mindset to go to when working with those students. I also coach the swim team, this will be my fourth year doing that and I really like that. My favorite thing is getting to know the students. Math is what I have to teach them, but my favorite thing is sitting and talking with the students and getting to know them and their goals and all of that. Getting to know the students helps me have a better rapport with them, and that allows me to teach them better, so that's something I've always striven to do with my classes during my career.”

“I was blessed with the opportunity to begin my teaching career at Prairie View Elementary in 2017, and I have taught kindergarten since day one!” Flores said. “This is my sixth year teaching at this amazing dual language school, and it is such an honor to represent Prairie View Elementary. I prefer to think of us all as one big team, each with a different set of skills and strengths committed to the success of our student's journey in education. Eventually, I would like to pursue a Master’s in special education. I want to learn more about students and help them find their talents.”

Flores and Carrillo added they enjoy working with their respective age groups.

“I enjoy working with our Pioneers for so many reasons, but my favorite is the relationships with both the staff and students. I am so blessed to be able to work in such a caring and positive work environment, and my kinder team is the BEST!” Flores said. “Each day, I get to share my passion for learning, exploring, and problem solving with these students. In return, they challenge me and teach me something new every day. We laugh, learn, and grow together!”

“When I was thinking about what level of education I wanted to go into, I knew I wanted to be around the older age group because there's more independence at that level compared to, say, the elementary school level, and you don't really have to start at the full beginning of everything with high school students,” Carrillo said. “And I knew the junior high age group would be crazy to work with because that age is just weird for everyone, it doesn't matter who you are. I knew I wanted to be a teacher since I was in about sixth grade, and my counselor at that time basically told me 'Good luck being poor.' So, being a slightly selfish teenager, I looked for something else and ultimately decided to become a computer graphics major in college. But then I went to a conference in San Jose to learn about all of that, and the gentleman who was leading that conference said 'If you haven't done X, X and X by now, you're behind the game of thousands of other people looking to get into the same field as you.' I realized then the computer graphics stuff was more of a hobby for me than something I wanted to do for a living – I still do some of that on my own time, but it's definitely more of a hobby than anything else. In my senior year of high school, I was tutoring someone, and I realized being a teacher was what I was meant to be and helping teach a subject to someone.”

Carrillo and Flores also said there are many things they would like to see happen in the future.

“It's not really related to teaching, but I'd love to see that former Walmart Neighborhood Market building turned into a pool facility. I want to get that property back to the district and turn it into a pool facility for our swim teams,” Carrillo said. “We practice in the pool at Seward County Community College, so we're basically at their beck and call as far as when we can use it – I'm so appreciative and grateful they let us use that facility, but with the recent repairs and all of that, we're basically out a facility. The girls team likes to start practicing around now in order to prepare for the upcoming season, so I think it would be great if we could have our own facility for our teams and not have them stress out about whether or not they'll be able to practice, and I think the whole school would benefit from something like that. I would also like to establish more social-emotional learning for students – last year, our social worker team had begun that, but there is some shortage on that staff, so it's not being focused on as much as it should be. After COVID-19, one of the things the students needed the most was someone to hear them out and validate what they were feeling. There was so much anxiety among the students as far as coming back to school and keeping healthy and making sure they were doing everything right, plus any issues that were going on at home. I want to make sure we show the students we care about their wellbeing.”

Overall, Carrillo and Flores agreed, they are very humbled with their respective honors.

“I wouldn't have gotten to this point without the support of my family. My two boys have taught me more about patience than I ever thought I would need to know, and my wife has been so supportive through everything from moving to Liberal and making adjustments with her own job, so I'm very grateful to them,” Carrillo said. “I also have several current and former coworkers I have to thank for teaching me how to be a teacher and how to connect with the students. I've carried that mindset my entire career now, and it's one I know I'll keep with me as time goes on.”

“I am so thankful for everyone who has mentored me throughout my educator journey. Especially Mrs. Haskell, words cannot describe how AMAZING she is,” Flores said. “She sees the best in everyone and supports us to the best of her ability! Thank you Prairie View Elementary!”