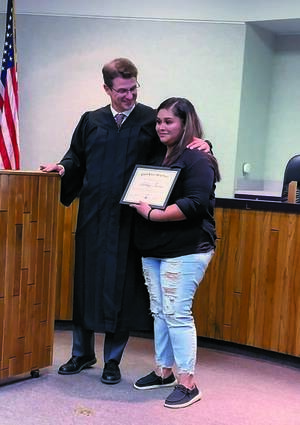 The road to recovery from addiction is a quite difficult one for most drug users, and for Ashley Trevizo, that journey proved to be just as difficult.

Recently, Trevizo became the first graduate of the City of Liberal’s Drug Court program, a program Municipal Court Judge Jason Maxwell said is different from most of its kind.

Instead, Liberal’s Drug Court operates on an application basis, with people who have committed non-drug related offenses, have other problems and realize drugs are an issue can apply.

“We can admit them into our drug court and help them before they end up having prison sentences and maybe even some felony convictions,” Maxwell said.

The local Drug Court program started with a test case in 2019, but Maxwell said it took some time to get the program set up.

“We developed a program and put that together as that was going along, but we really didn’t have a set drug program until the end of 2020,” she said. “That’s when we officially started, and Ashley came in shortly after we started.”

It is often said admission is the first step to recovery for an addict, and Trevizo said that was her initial concern when starting treatment.

“The number one rule I had made for myself was to be honest,” she said. “If you’re not honest, you’re not going to get the honest help  you need. If you need that help, be honest.”

Trevizo said she kept honesty at the forefront throughout her time in the program.

“Even if I thought I was going to get in trouble and get a sanction, I didn’t care at that point,” she said. “Anything I knew I had to say, I said it. I had no filter.”

Maxwell said Trevizo’s time with the Drug Court started with a risk assessment with Probation Officer Gena Burnett to see how likely she was to reoffend.

Trevizo later got an evaluation at City On A Hill for alcohol and drugs, where she said she continued being honest, and she then went back to Burnett, who told her she needed to get inpatient treatment.

Trevizo’s inpatient time got off to a bit of a rocky start, though.

“I didn’t come check in because I knew I was going to inpatient, and I wasn’t ready,” she said. “I went to jail, and I sat there for about four days.”

“We influenced that decision making, and she went to inpatient at that point,” Maxwell said.

Trevizo did her outpatient treatment at City On A Hill.

Still a work in progress, Maxwell said the local Drug Court has had some hiccups.

“We have a reintegration facility for women, and we have some sober living options for women,” he said. “We don’t have those options for men. We can ship them to inpatient treatment like Ashley, but when they come back, we don’t have a place to put men. We struggle with men in the program because they don’t have safe environments.”

The Drug Court has had much support from the community, and Maxwell said it would not be in place without that support.

Trevizo, who had used methamphetamine for seven years, said Drug Court has helped her a lot.

“I struggled with depression,” she said. “I asked for help from family, but I don’t think they heard me. I knew I had to stop one way or another. Entering into this program has changed my life a lot, and it taught me how to stay strong.”

Another thing Trevizo had to be continuously through her recovery journey was strong.

“I had to keep telling myself I didn’t want to go through the same things I had gone through when I started using meth, and I didn’t want to lose my two daughters I do have custody of,” she said. “That’s what made me change.”

As for Trevizo being the first Drug Court graduate, that was somewhat prophetic for her.

“Whenever I came into the program, I told Gena I was going to be the first one to graduate,” she said. “I feel very proud of it. I rocked it.”

Trevizo now works in food service in Liberal, and she said her transition to sobriety is a little easier than she thought.

“My job has helped me a lot,” she said. “It’s helped me stay on track, and it’s helped me be more responsible with paying bills and learning how to budget.”

Trevizo said she wants others to learn from her road to recovery.

“I hope my story can help other people who struggle with addiction, and the only way to do that is they have to be honest in order to get honest help,” she said.