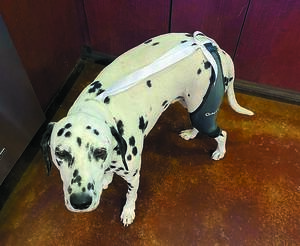 Mayday, the Guymon Fire Department’s 8-year-old Dalmatian, is fitted with medical equipment after her fall from a ladder truck severely injured her hind leg. She was scheduled to have surgery Tuesday morning in Oklahoma City. Courtesy photoROBERT PIERCE • Leader & Times

The word “mayday” is often used as a distress call in emergency procedures, including firefighting.

While it may be used in that context too at the Guymon Fire Department, Mayday is also used to refer to one of man’s best friends at the station.

Mayday is the fire department’s 8-year-old female Dalmatian, and for her whole life, she has stood at the ready to greet people at Station 1 in Guymon and carry out her public relations duties during fire prevention.

Since she was 2, she has been teaching and demonstrating to kids and adults how to stop, drop and roll. In parades, she sits high in her dedicated seat of the 1920 fire truck and enjoys seeing everyone.

“She is a station and department icon,” GFD Chief Grant Wadley said.

Dalmatians have a long tradition in the fire service, dating back to the horse drawn wagon days. Now the role of a fire house Dalmatian is not keeping the horses calm and safe, but rather as protector of the men and women of the department in the station.

Last month while responding to the schools with firefighters teaching fire prevention, Mayday lost her footing getting out of the ladder truck and severely injured her hind leg. At the time, it did not stop her from meeting and licking the kids who had been anticipating her arrival, and later she was carried back to the truck by her firefighters upon completion of the job.

Doctors found Mayday has a severe leg injury which is equivalent to the human version of a complete tear of her ACL. If not repaired, she may not have use of her leg. It requires a special surgery that was scheduled to be performed in Amarillo, Texas, next month.

Monday, GFD Capt. R.J. Vaughn, however, reported that procedure may come even quicker.

“We have met all of our goals,” he said. “We’re going to have her surgery. In fact, I am on my way right now with Mayday in the passenger seat. We are headed to a hospital in Oklahoma City where Dr. Kramer specializes in this surgery she needs.”

Mayday was scheduled to have surgery Tuesday morning. Once the surgery is completed, she will have a long downtime and rehab.

“The goal is to get Mayday back to her normal active self and continue putting join into the community with her service,” Wadley said.

As for now, Vaughn said the canine friend is still in good spirits.

Vaughn agreed with Wadley, saying visitors to Station 1 will often ask for Mayday upon arrival.

“Her firefighters, that’s her family. She’s a huge icon,” Vaughn said. “In fact, four or five years ago, we had trading cards with the firefighters and all the apparatuses, and she actually had her own card made. I had more kids come up to the fire station asking if they could trade a firefighting card for a Mayday card. She’s a big inspiration to Guymon, the whole community. Everybody loves her.”

Tickets are $10 each or three for $25, and each ticket sold has a chance to win a new large Pellet smoker/grill. The drawing for the smoker will be Jan. 2, 2023.

Those wanting to purchase tickets can contact a Guymon firefighter or the GFD at 580-338-5536. More information can also be found at the Guymon Fire Department Facebook page or Mayday Facebook page at GuymonFD“Mayday.”