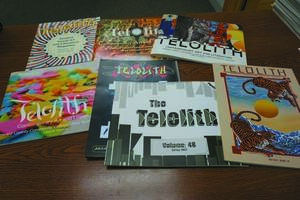 These are just some of the past editions of the SCCC Telolith that have been printed. This year marks the 50th anniversary of the publication, and advisor Dustin Farmer said he is proud of how the magazine has changed throughout the years. L&T photo/Elly GrimmELLY GRIMM • Leader & Times

Creative people search for some type of outlet or way to get their work out into the world, and for 50 years, Seward County Community College’s Telolith has been helping with just that.

As SCCC art instructor Dustin Farmer tells it, Telolith has a rather interesting origin story.

“Telolith got started in 1972, and it was originally for just writing, like poems and short stories and that sort of thing. Eventually, Telolith started including artwork from students, so it's progressed to what it is now, which is a journal of student art and literature. The name ‘Telolith’ comes from a type of crystal, and it ultimately stuck as the title,” Farmer said. “I took over as the advisor about seven years ago, I've been a graphic design instructor for a couple decades now, and Gina [Moore] will be the fourth English instructor I've worked with for Telolith in the time I've overseen it. It's progressed into a showcase of student art and writing, and I really like how that's happened. My graphic design class designs the cover for each issue and the students are in charge of laying everything out and making it look good, and the English Department helps with editing and some of that. We always try to have things done a little early so the students have a chance to do some editing if they need to do so, and it's always an interesting project for my graphic design courses because it gives them a real-world application of what they're learning about in class and gives them a chance to showcase some of their own creativity. When I first became the advisor, Telolith had a bit of a drawback as far as the interior, because it used to be printed in just black and white, but I started hunting around for other printers and ultimately found one who could print Telolith for us in color, and I think that's been a real benefit. So the look has changed, but again, the focus is being a showcase for the students' art and writing. I think what we put together comes out really well given how we're working with freshman and sophomore students, and things like this at universities are typically run by junior and senior students, so I'm really proud of what comes out.”

Farmer said the publication has seen many changes since its inception.

“The types of entries we get has definitely changed, things have gotten much broader in scope and the students feel more freedom with what they can write – they don't feel the need to conform to a single thing and can be more of themselves,” Farmer said. “The voice of the students has definitely improved and they're not as afraid to really show/write what they're thinking in their pieces. Susan [Copas] and Bill McGlothing really helped with that when they were here, and that's also greatly helped Telolith as far as the quality of entries we get. We’re always encouraging the students on campus, if you’re interested in writing or in art, we’d love to see submissions from them as time goes on, because the more entries we get, the more dynamic the project is, and that's always a good thing. Not ALL submissions can be fit in, but we appreciate what comes in.”

And even though Farmer has only been the advisor a relatively short time, he said he has greatly enjoyed working on Telolith with the other students involved in the project.

“I was originally hired at SCCC as the 3D art instructor, and I was teaching Ceramics and some other 3D design and art classes. Then, when the 2D art instructor, Susan Copas, retired, it was decided to consolidate both those positions to one teacher, me,” Farmer said. “Telolith is such a staple for the department and SCCC, and it gives people a chance to look at the creative side of college and give that voice. Everyone sees what the athletics department is doing, a lot of people show support for the music/drama programs, but Telolith is kind of underrated gem that people know about but maybe haven't looked that thoroughly into it. This is a great chance for those students to have something to be proud of. The students I work with are great. I'm a teacher first and foremost, and I enjoy helping the students learn about design and what goes into creating a project like Telolith, and I see them grow and improve in their skills as time goes on. They become stronger artists because they know the magazine is something a lot of other people are going to see beyond just me, the instructor. They push themselves for this project and it's great seeing the students get stronger in their skills.”

Farmer added he is proud of Telolith having reached the 50 year milestone.

“I think it's great. We haven't fully nailed down how we're going to approach this particular issue, but I think it's amazing for Telolith to have lasted this long. Everyone at SCCC have been so supportive of it, and they don't try to micromanage or control what goes into it, and that really allows the students to go wherever they want to with it. So this time around, hopefully, it'll be a pinnacle of all of that and they'll push themselves to really showcase what they can do. It's an important milestone, but I can't sit here and say the students will put more effort into this issue than they did with last year or two years ago JUST because it's a milestone, it's going to be a good quality project because they students care about each and every issue and always give it their all. It'll still be a great spectacle and be a great showcase for SCCC. The real control is in the students' hands – they do the writing and photography and layout, I'm mostly here to advise and give some counsel if there's a situation where they're stumped on something. I really want the students to know they can print THEIR vision of what they want Telolith to be.”

Having reached half a century, Farmer said he hopes to see Telolith continue for a long time.

“Something that's been heavily discussed with the students is turning Telolith into more of a journal instead of a magazine, because journal just fits the entire vibe of the project better than magazine. We've got a bunch of the past Telolith issues online because the former Crusader instructor Sue Sprenkle made that a goal to have them fully digitally accessible – the library has all of the issues available, but there are still a few of the early issues that need to be put online for people. I would also like to see the students continue pushing themselves with design and everything else, that's something I've enjoyed seeing while working on Telolith. There's some discussion going on with the cover design, but the final decision of how everything will look won't happen for a little bit yet, and they'll get some feedback and then make any necessary changes and all of that, and then all the work will be plugged in and laid out.”