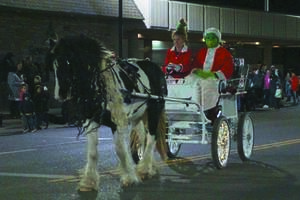 The Grinch and Cindy Lou Who ride in a carriage up Kansas Avenue during a past Liberal Christmas parade event. This year’s parade is scheduled for 6 p.m. Saturday, Dec. 3, and coordinators are excited for this year’s festivities. L&T file photo/Elly GrimmELLY GRIMM • Leader & Times

The Christmas season is nearly upon everyone, and part of the kickoff to the holidays in Liberal includes the annual Christmas parade.

The 2022 Christmas Parade will be Saturday, Dec. 3, and will include entertainment before the parade starts at 6 p.m. Like every year, the parade will start at 6th Street and Lincoln Avenue and make its way down Kansas Avenue to the railroad tracks. As coordinator Earl Watt tells it, there is a lot to be excited about for this year’s parade.

“So far, we've gotten several phone calls and requests for parade floats from individuals and entities who we've never had in the parade, which I think is really good to see because it's always nice to see something new in the parade,” Watt said. “Kansas Avenue is looking really nice since the City of Liberal has put up the snowflake lights and those decorations, and I expect the Wrap A Lamp contestants to make the town look really nice too. I've also already seen several storefronts in town get decorated and lit up for the holidays. I also think people are looking to keep getting out and participate in stuff after the pandemic – 2020's parade was smaller because of that, and I know we saw an increase with last year's parade, so I think people are wanting to get out more, and it truly feels like we're on the back side of the pandemic. The midterm elections were also quite contentious, so I think people will use this time to put that behind them for a bit and focus on finding joy with the parade.”

Overall, Watt said, Dec. 3 will be full of holiday cheer for people.

“Dec. 3 is a big day in Liberal, because that is also the day of the 55th Folk Art Festival out at the Seward County Activity Center, so people can spend the day there enjoying all of that and then end the day at the Christmas parade and enjoy the floats and music and everything else that will be going on,” Watt said. “We'll also be giving away prizes, and people always get excited about that. I always say the Christmas Parade is the first official family get-together of the season for the community – it's a time when everyone can come together and share the experience of the downtown parade and kick off the holiday season, I know the Downtown Dance Academy always puts together a lot of great routines..”

Watt added the Christmas parade is always a big part of the holidays for Liberal for many reasons.

“First and foremost, we can't forget the meaning and focus of Christmas, which is the birth of the savior. The faith community has had an influence for centuries as far as Christmas and spreading the word about the birth of the savior being the best gift of all, and you can't forget that as the meaning of the season,” Watt said. “When I was younger, that time with family and seeing the lights of Liberal while driving down the streets and seeing the different decorations in other families' houses was always great, I knew it was a special time seeing everything lit up. All of that makes Christmas the best time of the year, and I look forward to it every year. The holiday season is here, and while there are a lot of things people tend to worry about, now is the time to step back for a bit, be appreciative of what you do have and not focus so much on the things we don’t have.”

Watt also added encouragement for locals to set up small booths for that day, and said the prizes for this year will be big.

“If anyone wants to set up a small booth at the Christmas parade, all they need to do is call me at the paper at (620) 626-0840 and let me know what they want to do. Since it's usually cold, I know some people might want to sell hot chocolate and treats like that, and we'll welcome that, there's no charge to have a booth,” Watt said. “And we do have to know your plans so we can make sure everything's set up properly, so please call the paper beforehand. We've had everything throughout the years from hot chocolate and other snacks, barbecue, glow sticks and other things like that. If an organization or club or nonprofit wants to do something, we'll certainly welcome anyone who wants to come out and have a small fundraiser.”

For the 2022 holiday season, Watt said he hopes the parade will be a good kickoff for people.

“It's always great seeing the dance teams come out and perform, those routines are always great to watch and I know there's already been work done with them. I'm glad we have traditions like the Christmas parade and Pancake Day and Homecoming, they make Liberal a unique place,” Watt said. “I don't care how old you are, the Christmas parade is the time to be a child again for at least a little bit and enjoy the lights and floats and everything else that will be part of the parade. We've been doing the Christmas parade for several years now, and it's always a great time. We never have control of the weather or any of those factors, but it's great seeing people enjoying the lights and floats and performers. It's just so much fun, and every one of the groups/organizations that put a float in ought to be recognized because they invest a lot of time and effort into making the Christmas parade a good time for everyone, and we want to continue that. The countdown is on and Christmas is on the way.”