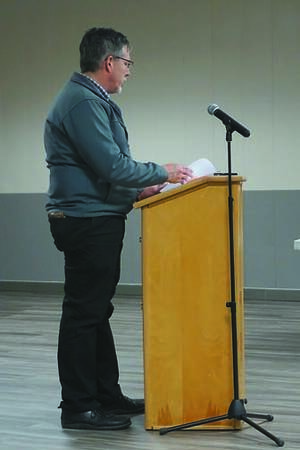 The Liberal City Commission took care of business rather quickly  at its most recent meeting Tuesday evening.

Before the new business items on the agenda, Liberal Mayor Jeff Parsons read a proclamation for Small Business Saturday.

The commission then heard from Dustin Ormiston with Hay, Rice & Associates regarding the 2021 audit and then the 2022 audit contract.

“We issued an unqualified opinion on the audited financial statements, and that means we’re not aware of any material changes that need to be made to those in order to properly reflect the financial condition and operations of the City of Liberal,” Ormiston said. “This report includes a management discussion and analysis, which is management’s brief synopsis of the year and the financial condition of the city as of Dec. 31, 2021, and that’s a good area to get a general idea as to the operations of the city. In addition to that, there is also a statement of assets and liabilities, and that gives the general status of the city from that standpoint including everything the City of Liberal owned and everything the City of Liberal owed as of Dec. 31, 2021. In the statement of activities for the city, that shows each functional activity the city has and the revenues generated from those activities as well as the amount of money expended to support those activities. It gives a good indication of the different departments – for example, how much does it cost to run the Liberal Police Department, how much does it cost to run the Liberal Fire Department, etc.”

Also on the agenda for the evening was a pair of project requests for the Liberal Police Department building, including new flooring and the purchase of new evidence lockers.

“We are requesting new flooring for the Liberal Police Department including the Municipal Court offices and the lobby and bathrooms outside of the Municipal Court courtroom. The flooring that’s down now has been there for 15 years and it’s definitely showing its age,” LPD Capt. Jeff Wade said. “We did request bids and the best one we got was from Scantlin’s Furniture for $73,352, and that includes new laminate desktops for the squad room, which are also severely showing their age. With the evidence lockers, the ones we’re currently using are from the former South Middle School and are not appropriate for proper evidence storage, so the lockers we are requesting are professionally built for the sole purpose of housing evidence, and meet the criteria and requirements for CALEA accreditation. The cost of the lockers will be $14,175, with an additional $1,124 for shipping, for a total of $15,299.”

After more discussion, the commission ultimately approved both projects, with the flooring to come from the 1-cent sales tax and the lockers to come from the department’s repair and maintenance fund.

Up next for the commission was discussion of renovations to Grier House, during which the commission approved a contract with Touch of Class Painting, LLC in the amount of $97,450, with $9,000 of the funds to come from a Kansas State Historical Society grant and $88,450 from the Economic Development portion of the 1-cent sales tax, and for City Manager Rusty Varnado to sign the contract. The commission also approved the appointment of Diana Villareal to the Liberal Convention and Visitors Bureau Advisory Board and also approved the purchase of a 2022 Hustler Hyperdrive 72” SD with a three-bag catcher from Keating Tractor for $11,248, with funds to come from ARPA funding. To conclude the meeting, the commission approved a pair of invoices from Al Shank Insurance and Hay, Rice and Associates.