‘Jingle and Mingle’ in Plains for Christmas 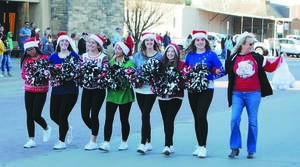 Southwestern Heights cheerleaders are joined by Coach Ann Swank, right, as they make their way down Grand Avenue in the 2021 Christmasing in Plains parade. This year’s Meade County celebration is scheduled for Dec. 4. L&T photo/Robert PierceROBERT PIERCE • Leader & Times

December’s first weekend will be a busy one in Liberal with the 55th annual Folk Art Festival and the Downtown Christmas Parade getting people in the holiday mood.

In neighboring Meade County, yuletide festivities will also be taking place Dec. 4 with the Christmasing in Plains celebration continuing the spirit of the season.

This year’s theme is “Jingle and Mingle,” and Plains Lions Club member Jeanne Roberts said from start to finish, the day will find plenty of ways to do just that.

“We start off at noon with a meal,” she said. “The Wizzywig Craft Show will start at noon also in the Community Building. We’ve got the high school music classes singing off and on all afternoon.”

The Christmasing in Plains parade typically starts at 4 p.m., and though she was unsure of when this year’s parade would start, Roberts did say the parade will feature a snowball fight. A turkey fly and hopper ball races will take place following the parade, with the turkey fly happening downtown and hopper ball at the Community Building.

“Santa Claus will be in the building shortly after the parade for kids to talk to,” she said. “We have another meal around 5 p.m., and everything folds up around 6 p.m.”

The Lions Club will also have its kiddy train out for rides, and Santa will likewise be giving out bags of candy. The Snowflake King and Queen will also be crowned during the parade.

The Wizzywig Craft Show has been part of Christmasing for a few years, and Roberts said the show provides even more fun for people to enjoy.

“It adds a lot of people,” she said. “We’re pretty much always full of vendors. They keep coming back. We put the crafters around the wall, and the tables are in the center for people to eat. Between the two rooms, I think we can have 16, 18, and we’ve even got them out in the hall this year. It should be fun.”

Roberts said this year’s craft show will feature a little bit of everything.

“We’ve got a lot of wooden Christmas decorations,” she said. “We’ve got candles. We’ve got homemade body soaps and scrubs, jellies and lots of baked goods. One booth is just all homemade cookies. The evening meal is usually chili, but they’re trying to find another organization that wants to do a meal.”

Roberts explained how the snowball fight will happen.

“About halfway through, we stop the parade, and we pass out balls to people on the floats and some of the people on the outside,” she said. “We just start a great big snowball fight. It was fun last year.”

With a weekend full of activities in Liberal, including the Folk Art Festival, the Downtown Christmas Parade and South Church of God’s “The Innkeeper’s Tale,” Roberts said Christmasing in Plains adds to the spirit of the season.

“It’s something Lions Club has done for more than 50 years,” she said. “It’s a tradition, and we actually have a better turnout when it’s cold.”

“The turkey fly, we did that a long time ago, and it always went over really well when it was downtown,” she said. “We moved it out close to the Community Building, and it hasn’t been going over as well. We decided we’re moving it back downtown this year to see if that’s the problem.”

In the past, Roberts said the turkey fly has been one of the most fun parts of Christmasing, but after it was moved to the Community Building, it has not been the same.

“Not as many people were participating, so we moved it back downtown,” she said. “It’ll be immediately following the parade when there will still be a lot of people downtown. If you get the right number, you win a turkey.”

While many may already be in yuletide spirit, Roberts said Christmasing still adds joy to the season.

“We don’t have very many community activities anymore,” she said. “It’s just a nice time to get together and visit with people you don’t have the opportunity to anymore. A lot of visiting will be going on that day.”