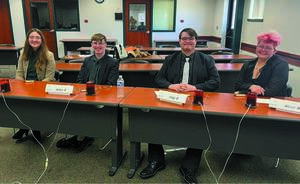 One week after the Thanksgiving holiday, it’s time to shift gears with holiday-themed programs of all kinds. While elementary schools might feature a costume or two, Seward County Community College’s music department has an evening of choral and orchestral music planned.

The SCCC Concert Band and Concert Choir will present the Winter Concert at 7 p.m. Dec. 2, in the Jesus A. Manriquez Showcase Theater. The annual concert showcases student musicians and provides a welcome dose of holiday cheer.

Tickets are available for $3 in advance or at the door. Proceeds benefit the SCCC Music Endowment scholarship fund. To reserve your ticket or for more information, contact the Humanities Department at 620-417-1451.

Seward County Community College’s respiratory therapy instructors were thrilled to learn this week that a Saints alumnus has snagged an award for excellence in care.

Oklahoma Children’s Hospital OU Health Registered Respiratory Therapist Kat Arteaga has been named the recipient of The PHIL Award for 2022. The annual award is part of The FACES Foundation's program to recognize exemplary respiratory care.

The PHIL Award is the only nationally recognized hospital-based program that honors outstanding respiratory therapists. This is the first PHIL Award given at Oklahoma Children’s Hospital and the first in the state of Oklahoma.

Arteaga was nominated by patients, families and peers who recognized her consistent professionalism and care for both patients and colleagues.

Jeff Campbell, MBA, RRT-NPS, director of Respiratory Care at Oklahoma Children’s Hospital said, “It’s important to know that this PHIL Award is not only to acknowledge Kat for her consummate professionalism, but to also recognize the great work our respiratory therapists do every day. It was an honor to present the first PHIL Award in the State of Oklahoma to Kat — it is well deserved.”

Quiz scholars from SCCC hit the road for competition

“Quiz Bowl is always fun, but especially now that we are competing at live tournaments,” said Horinek, who volunteered to start the college’s competitive team the previous academic year. “When we started, we were limited to mostly virtual tournaments. Then, all of our team members except one graduated and moved on, so we have had to restart with new students.”

The Quiz Bowl team practices weekly at 5 p.m. in the SCCC Library and new members are welcome to join in. For more information, contact Horinek at This email address is being protected from spambots. You need JavaScript enabled to view it..