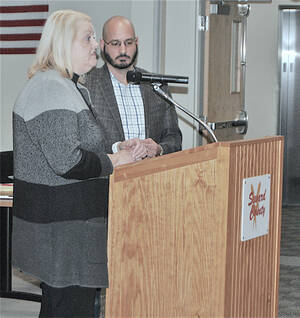 Officials with the City of Liberal are looking to expand the current Neighborhood Revitalization Plan, and doing so requires public hearings and a process.

Svaty said being part of the process would be a good time for the commission to determine if they wanted expand the current NRP and make it countywide.

“The city commission and city manager are interested in expanding the current map for that,” he said. “By statute, that requires a public meeting and a fairly lengthy process. Before we do that on the city level, I am visiting with all the other entities within the county to see if they would be interested in engaging in that conversation to participate.”

Svaty said the current map contains only a small portion of Liberal.

“What the city is looking to do is to expand this to at least the city limits,” he said.

Svaty said other entities in the area have taken similar measures.

“Scott County has recently passed a countywide neighborhood revitalization plan as well that includes some other elements,” he said. “Right now, ours includes industrial growth and residential growth. The Scott County one also includes agricultural growth as well.”

At this time, Svaty said nothing is hard and fast as to what the plan would look like other than possible expansion of the map.

“What I want to know is whether or not the county wants to be included in those conversations and in that process,” he said. “Any participation now doesn’t mean you have to participate in the future.”

Svaty said he simply wanted to know if county leaders wanted to be part of the possible NRP expansion or to leave the plan as a citywide project as an economic development tool for growth.

“The plan has two elements to it,” he said. “One is for new growth or new construction. The other is for industrial or residential remodels. There are varying requirements for both as far as length of time for the tax rebate and required improvements for each one of those.”

The current NRP provides a 95 percent rebate for 10 years on new construction and for five years on remodels. Svaty said this could likewise allow for the potential to open the county for agricultural growth.

Administrator April Warden said with Svaty working with the city to start the NRP-expansion process, now would be a good time for the county to become involved.

“Instead of us deciding at a later time whether we want to do it or not, he’s having to go through the process right now with the City of Liberal,” she said. “This would give us an opportunity for him while he’s going through that process for us to take a look at it, and I do believe there are some incentives.”

Warden said the county too could incentivize some contacts for business interested in coming to the county and open the NRP up to the rural parts of the county, and it also gives county leaders an opportunity to see what others such as Scott County are doing to see if it would work in Seward County.

“From an administrator’s standpoint, I would appreciate if you guys would consider it,” she said to the commission. “It doesn’t lock you into anything tonight, but it allows us the opportunity to look at what it could do for us.”

With the NRP plan in place at this time, Svaty said anyone who wants to build a new structure can apply.

“If it falls within the map that is currently there, you apply to the city prior to building and doing any of that construction,” he said. “If it meets the requirements of the application, there’s a back and forth between the county, where they check the appraised value, and the city, where you have to pull all the appraised permits.”

Once this is done and construction is complete, Svaty said a review is done for the new appraised value.

“You receive a 95 percent rebate on the incremental property tax increase between the existing and the new on that,” he said. “The current plan is only for that city portion on those property taxes. There’s only one public entity on that.”

Svaty said if other entities join in on the NRP, the rebate increases. Those entities include Seward County Community College, USD 480 and the county itself.

“It’s all done in a rebate form, where they pay those property taxes initially, and those are rebated,” he said. “There is a 5 percent portion that is not rebated that remains at the county currently for administrative costs.”

Svaty said rebates are given on commercial properties that show at least a 20 percent improvement on existing appraised value, while residential properties need only show a 15 percent increase.

With new commissioners scheduled to come on board in January 2023, Commission Chair Ada Linenbroker said the county should wait until then to make a decision.

“I don’t have a problem with you working forward to come up with some strategy and ideas, but because I’ve only got one other meeting, I don’t want to go in on this,” she said. “I want to give you permission to move forward and come back, but I would rather you present it to the new commission. They’re the ones who are going to be working with it, dealing with it in the future.”

Warden reminded commissioners they were not making a decision at Monday’s meeting.

“He’s just asking do you want him to move forward in the process as to what it would look like,” she said.

Linenbroker said Svaty could come back to a future meeting and talk to commissioners about possibly participating in the NRP discussion then.

“I’d like for you to go ahead and start working on the process to see what all it’s going to end up being for the county and how it will affect everybody, and come back and present it once you get that all put together,” she said.

No vote was taken, but it was the consensus of commissioners to allow new board members to take their seats before deciding what the county should do.