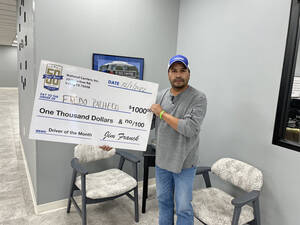 Courtesy photoSpecial to the Leader & Times

National Carriers, Inc named Liberal resident Fredo Pacheco as Driver of the Month for November. Fredo has been an owner operator within the livestock division for the past nineteen years. He has accumulated more than 2 million miles without an accident. He was recognized recently with a $1,000 bonus and is now a finalist for 2022 Driver of the Year. The winner will be announced during Driver of the Year recognition in Arlington, Texas March 31, 2023. The top driver will be awarded a $10,000 bonus.

Director of Livestock Jason Greer stated “Fredo is an under the radar, get er done, kind of driver. He might not always like the situation, but he will always get the cattle picked up and delivered. He is an excellent driver who handles cattle with the best of them and cares about doing a good job.  He’s true to his word, well grounded, not flashy, and a very humble man. His family is his world!”