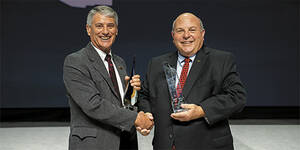 At its annual meeting in December 2022, Kansas Farm Bureau elected a new president, and about a month after becoming head of KFB, Joe Newland attended the 104th convention of the American Farm Bureau Federation, where he received some more good news.

At the national convention, KFB was awarded the Pinnacle Award, the highest honor a state Farm Bureau can be awarded for program and membership achievement, and the New Horizon Award, which celebrates the most innovative new state Farm Bureau programs.

Newland said receiving the honors this early on in his time as president was an awesome achievement for KFB.

“When you’re on stage in front of several thousand people and your state is called out by name to receive the highest award awarded by American Farm Bureau, what a great feeling,” he said.

Newland is a native of Wilson County in Southeast Kansas and is no stranger to the agriculture industry.

“I started farming back when I was in high school,” he said. “My wife and I, we’ve been at it for more than 48 years now. It’s been a great lifetime building a farming operation.”

As he starts his work as the new head of KFB, Newland said members are looking at water as a top priority, and while those in Western Kansas may be focusing primarily on the Ogallala Aquifer, the president said reservoirs in other parts of the state will get some attention as well.

“We’ll be addressing those quite heavily,” he said.

Prior to becoming KFB president, Newland had served in the Kansas House of Representatives, including some time on the House Water Committee, and with that experience, water has become an important issue for him.

Another continuing problem for farmers, as well as other state constituents, is taxes, and Newland said KFB will focus some attention there too.

“We’re facing taxes,” he said. “The state does have an incredible amount of funds right now, but how long will that last? What do we do to change the structure in taxes with income tax, property tax, sales tax? What does that picture look like? We’ll be following that.”

At the federal level, focus has again turned to the EPA’s Water of the U.S. rule, and Newland said KFB’s delegation has sent a letter to EPA officials and President Joe Biden stating Farm Bureau does not support WOTUS and why it does not.

“The control of every little pond or stream across our property should be a private property right,” Newland said. “That’s one reason we look at the WOTUS rule closely.”

As for his goals as KFB president, Newland said he primarily wants to further the voice of agriculture.

“We’re a dwindling population, especially when you’re talking about who the legislators represent,” he said. “The large counties can control what is being done at the state legislature level, so we need to be able to work very close with those more urban legislators to really further the prosperity of our farms and ranches across the state, but really the economy of Kansas in itself. Let’s face it. Agriculture is the number one economy driver of the state.”

This week, KFB hosted the Sunflower State’s six largest counties in terms of Farm Bureau membership to discuss many of the issues faced by smaller counties.

“Sedgwick County has 33 legislators,” Newland said. “My old district has one representative for four counties. That voice is somewhat dwindling within the state. We need to speak up as strongly as we can.”

Wilson County is located about 30 miles from the Oklahoma border and 60 miles from the Missouri border, and Newland said despite similar needs for producers across the state, there are also some differences in the various regions of Kansas.

“Our part doesn’t deal with underground water, the aquifers,” he said. “That’s the largest difference between our two areas. We’re still trying to grow similar crops. We have more of a cow calf operation on the east side instead of a feedlot operation on the west side, small dairies in the east, compared to large dairies in the west. Everything comes back to rules and regs, not only from the state, but definitely from the federal level.”

Newland said water continues to be the big issue at the state level, primarily how to preserve it.

“The water authority came out a few weeks ago and finally decided the survival of Western Kansas is water and how we save that for future generations,” he said. “It’s a shame it’s taken this many years for the state to want to preserve it and not to deplete it. We’ve got a lot of work to do on the state level.”

“I know we have in the eastern part somewhat, but times change and things evolve,” he said. “How we look at those types of issues is always challenging, and we still have to work to get anything accomplished. We want to make sure our ag organizations are working close together to carry a strong voice whether it’s on the state level or the federal level.”

Thursday, KFB hosted a webinar to talk to producers about providing an additional band of insurance coverage. This additional band can be used to reduce deductibles on crop insurance policies and cover shallow losses.

This also makes sure crops are covered on an individual and area basis, better preparing operations for what Mother Nature throw at crops.

Overall, Newland said producers will not see  big changes, but he did say KFB wants to make sure farmers have a strong baseline.

“I think you’ll see some in specialty crops,” he said. “Grazing lands may be a little different as far as a bottom line is concerned. Our cropland is probably not going to see too many changes.”

In Western Kansas, the 10-year rolling average on yields has risen significantly, so much that Newland said carrying crop insurance is not feasible for many.

Newland likewise said input costs have tripled in the past year and a half, and even with an increase in commodity prices, many farmers are simply breaking even at best.

“It’s tough to keep young producers coming back to the farm and the farms to survive,” he said.

The farm operation Newland runs in Wilson County is a rarity in that regard.

“My two oldest sons have been back to the farm for several years, and I just recently had a grandson come back to the farm,” he said. “We’re one of the few who are lucky in that aspect.”

Despite the problems, Newland said the state of agriculture in Kansas remains strong.

“It’s still the strong economic driver for the state of Kansas,” he said. “We have challenges with dry years, and a person always feels like they’re down on their luck a little bit. We’re forever optimistic.”

With 2022 now in the past, Newland said KFB is looking forward to what 2023 will bring.

“With prices coming down a little bit on our input costs, if we can maintain a strong market for our commodities, it can look pretty good,” he said. “The livestock market, especially on the beef side, it looks pretty strong if a guy can hang on to the cattle he’s got with the shortage of water and grass at this point in time.”