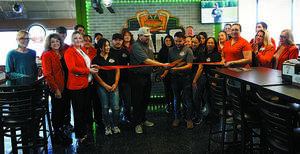 Owners and staff of Dads Sports Bar cut the ribbon at a ceremony last Monday with Liberal Chamber of Commerce ambassadors along with friends and family looking on. Co-owners Zaira Hernandez and Luis Delgado said they are excited to have the restaurant officially open. L&T photo/Elly GrimmELLY GRIMM • Leader & Times

With college and pro athletic seasons in full swing and being shown on TV, people are looking for places where they can watch those games and have fun.

Recently, Dads Sports Bar opened at 300 E. Pancake Blvd. for just that. As co-owner Zaira Hernandez tells it, there was quite a bit of work that went into the project.

“It was about four months ago when the idea came about, so we started everything right away to bring something like this into Liberal. I feel like everything worked really well and we were able to get everything set up exactly like we wanted it,” Hernandez said. “My husband, Luis [Delgado], is a businessman, and he really has a good head for opening businesses, and he'd also wanted to do something like this. He thought it would be something that would work in Liberal, so we went for it.”

“Then as far as the sports bar, there's not really anything like this in town,” Delgado said. “We want this to be a place where people can watch their favorite games and scream at the TV and have a bunch of fun while eating and drinking. The idea was really just about having fun.”

Hernandez said there is a lot of excitement with having the restaurant finally open.

“We're really excited about having everyone come in and trying everything we have on the menu. We also love seeing the people watching the games and having fun and screaming and rooting for their favorite team(s),” Hernandez said. “People can come in here and really be themselves and like Luis said, the idea was about opening a place that's fun. We're really excited to have everything open now, because there was a lot of work and time that went into putting all of this together, and we're happy to see the results of all of that work. The hardest part for us was the floors, we were on our knees for a long time working on that, and it took a long time painting and making everything look how we wanted it to. We were very happy and very emotional seeing all the people we had at the ribbon-cutting last Monday, we did not expect to have as big a crowd as we did. But I'm glad everyone was able to show up, it made us really happy to see all of that support from the community.”

Hernandez added there are many delicious options on the menu for people to try, and offered encouragement for people in the community to visit the restaurant.

“We have several different appetizers like mozzarella sticks, cheese curds, jalapeño poppers, and we've also got salads for people who might be looking for something a little lighter,” Hernandez said. “We've also got spring rolls and sandwiches and quesadillas and items like that. There's a little something for everyone. We've also got great drink selections, whether you want a beer or a mixed drink. We hope a lot of people come in to have fun and try something new in town with our different menu items and everything else we have here. We also want to support local teams, a big thing for us is to be a big part of the community and be a sponsor for young local athletes. We just want everyone to know we're here and we're ready to help provide a good and fun time for everyone who comes in. We'd also love to be a sponsor for local athletic teams and be a big part of the community in that regard and show that support.”