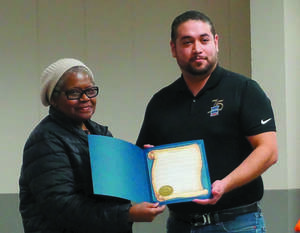 The Liberal City Commission took on more business to begin 2023 with a variety of community improvement requests.

Up first for the commission was discussion of improvements to the public water supply, which had several items.

“The first part of all of this is Ordinance No. 4595, which deals with what we discussed at the special meeting last week regarding the need to replace several water mains throughout the city,” Assistant City Manager of Administration Chris Ford said. “We’d also talked about the availability of a loan agreement from the Kansas Department of Health and Environment (KDHE) for a revolving loan, and the ordinance would actually allow us to enter into that loan agreement. In a nutshell, the entire loan amount would be for an amount not to exceed $4,068,038, and although the loan document is dated from April 2022, this is something that was started a long time ago. Through conversations with KDHE, that loan agreement is still valid, and that $4,068,038 would be spread over a 20-year term at 1.45 percent. The ordinance would also allow us to dedicate a source of revenue for the repayment of the loan, as we discussed, and those payments would be made funded from the Water Department revenues. It would authorize Mayor [Jose] Lara to execute the loan agreement with KDHE.”

“I would like to let people know I was against funding most of this with any sort of water rate increase,” Lara said. “Luckily, there is funding in there, and with the 3 percent already scheduled, I think we can accomplish this, get some projects done now, and hopefully make it to where we’re getting some projects done every year. This is an efficient way to do that, and we’re not borrowing money EVERY time we need to fix something. Hopefully, this will also help ease the load on our water crews because it seems about every winter, there’s some sort of main break, which means they’re constantly working in that cold, cold weather, so hopefully we can get this done and make things better.”

“And had KDHE not honored the 1.45 rate they gave us, we wouldn’t be able to take on some of this,” Liberal City Manager Rusty Varnado added.

Ultimately, the commission approved the ordinance, and the rest of the discussion moved along quite smoothly, with the commission also approving the loan agreement with the KDHE Public Water Supply Loan Fund. Also included in the discussion was Resolution No. 2394 concerning the authorization of a dedicated source of revenue for the repayment of a loan, as evidenced by the loan agreement between the KDHE and the City of Liberal, and the discussion ultimately  concluded with the approval of an engineering contract with Earles Engineering & Inspection.

Also before the commission was Travis Martinez with the Liberal Recreation Center regarding a $10,000 donation from the HUGS program toward his work to make the facility more open to people with special needs, and the commission also issued a proclamation for February as Black History Month.

“WHEREAS Black History Month gives an opportunity to share in the many historical and private contributions of African-Americans;  WHEREAS during Black History Month, we celebrate the many achievements and contributions made by African Americans to our economic, cultural, spiritual, and political development; WHEREAS Black History Month began as Negro History Week in February 1926 in the U.S. as a supplement to the school curriculum through the work of African-American scholar Dr. Carter G. Woodson, wherein his aim was to encourage greater awareness and understanding of the African experience; WHEREAS, later in the 1960s, the week expanded into Black History Month to commemorate through community activities a more balanced and accurate picture of Black history and is celebrated throughout the entirety of February as it coincides with the birthdays of Frederick Douglas and Abraham Lincoln; WHEREAS the State of Kansas recognizes the significance and contributions and advances African-Americans have made and continue to make in the State of Kansas and the world in such areas as education, medicine, art, public service, economic development, politics and human rights. We see the greatness of America in those who have risen above injustice and contributed to our society.”

The commission also approved a request from the Liberal Police Department regarding the purchase of three 2020 Dodge Durango vehicles, and also heard some information about Ordinance No. 4593 concerning several amendments to zoning codes.

“What’s in the agenda packet is actually a rough draft, and it includes items that need to come out as well as items that need to be added,” Code Enforcement Supervisor Keith Bridenstine said. “My main goal was to present it to the commission and give you a heads up. I would like this to be brought back at a future commission meeting for official approval, and anyone with any questions is certainly welcome to get in touch with me at City Hall. The changes include everything from fixing typos to relaxing some restrictions and a bunch of stuff in between.”

“This project has been going on for a long time now, and we want this to be a living document that changes as the times change,” Varnado said. “It can’t be said enough how much time and work has been put into this, and they are to be commended.”

“I remember this had been talked about before we officially began with the commission, and I wondered if we would actually have to dedicate someone full time to reading this,” Lara said. “I’m excited to see these changes made and for this to actually be turned into more of a living document, which is what it should be.”

The commission also approved installing lighting on the walking paths at McCray Park, and the project will include 15 40-watt solar lights with 20’ light poles for the walking path. All installations will be done by the Parks Department staff, and the commission ultimately accepted a bid from Solar Illuminations for an amount not to exceed $30,000. To conclude the meeting, the commission approved an agreement for a runway lighting project at the Liberal Municipal Airport.