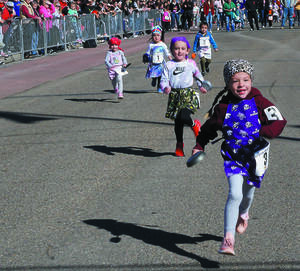 Pancake Day is just less than a month away, and many entities and groups in town are preparing, including the Liberal Recreation Department.

The Recreation Department is currently taking sign-ups for this year's Pancake Day races, which began Jan. 23.

“We're taking sign-ups for all the races, and that includes the children's races, the Men's Pacer Race, the Mascot Race and of course the big International Race,” Recreation Director Matt Quint said. “We're working to keep the torch going from Ronna Stump, she did such a great job being in charge of all of that for so long, and the staff here at the Recreation Center is working to keep that going. Each race has 15 slots, and it's always best to get signed up early so you're guaranteed your spot in the race.”

With the popularity of the races at all levels, Quint said it is definitely better to get signed up sooner rather than later.

“Once people figure out signups are taking place, we'll have a lot of parents coming in here to sign their children up throughout the day, and we'll do our best to get everyone in. Do not think 'Oh, there'll still be a spot tomorrow,' because there might not actually be one. Especially with the Short Stack races, those fill up really quickly because the parents and grandparents love seeing their little ones run as fast as they can on their little legs,” Quint said. “So get in here and get signed up as soon as you can if you truly want to have a spot in the race you want. When parents come to sign their children up, they don't need to bring anything extra, they just need to let us know what age race they'll be competing in and fill out a little paperwork, which takes less than five minutes. And signups HAVE to be done at the Recreation Center, we won't take any over the phone or online or anywhere else, people have to fill out everything at the Recreation Center office.”

Quint added he is particularly excited for the main event of the day, the International Race.

“The main thing I hear with the race is 'Oh, I can't do this,' but I think everyone can, the biggest thing is believing in yourself. Even if you're not really a runner, the International Race is just such a cool event and is just so much fun, along with the rest of Pancake Day,” Quint said. “There's the breakfast, the races, the Shriving Service afterward and the parade later that afternoon. I'm actually not originally from Liberal, so it's been great taking in Pancake Day from more of an outsider's viewpoint and just absolutely falling in love with everything that happens. I love the process and seeing everything that happens behind the scenes. Last year was the first year we used the chip timer system, and we were able to use that with all the racers, so there was no hesitation or arguments as far as who actually came in first. The system worked amazing, and I'm so excited we'll be able to use that again for the races this year. I love everything that goes into Pancake Day, including the flipping and eating contests, the races and everything else, it's just such an amazing community event.”

Quint said he is excited to have the return of the chip timer system for this year’s festivities.

“From our side, we thought everything worked great, and there was so much less stress. Pancake Day has so many working parts and there's just so much that goes into everything, so having the chip timer system was such a blessing, and the people in charge of that do similar events all throughout the country,” Quint said. “It made me feel so much more comfortable having that in place, and I'm really happy we were able to get them back for this year. We locked them in basically immediately after last year's events, which we're glad we did because they're quite heavily in demand. I always get pumped about the International Race and seeing who's going to be competing in that. It's so cool how we're going up against Olney and it's always a great group of ladies who step up to compete and run for Liberal, and that's the race that brings so much of the community out. As far as general expectations, we expect all the races to be pretty full, I have a feeling the children's races will fill up super quickly, and it always takes a little longer for the other races to fully fill out.”

Overall, Quint said, Pancake Day is all about fun.

“A big thing is everything's for fun and there's not really any pressure. It's a great event and even though there might be some tears, everything is purely for fun, and I've noticed children in general just love to run,” Quint said. “They also get the day off from school and have the chance to eat a bunch of pancakes – though hopefully not too many – and it's just fun to watch and be part of. I always tell parents to go ahead and sign their children up and I also remind them to keep the weather in mind and be sure they're warm enough and have their aprons and little pans and everything else. We're preparing ourselves to be a little colder this year since everything's near the end of February, so I would definitely remind everyone to keep that in mind. I'm excited to see all the races for this year, and I can't wait to see how we do against Olney. It should be a great race this year, just like in the past, and I think Liberal will show up and show out again.”