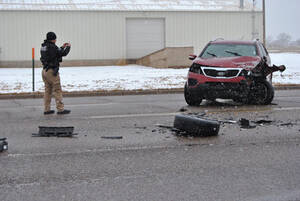 An officer takes pictures of a Kia Sorento after it was involved in an accident Tuesday afternoon in west Liberal. The driver of the vehicle was issued a citation for failure to yield the right-of-way while making a left turn. L&T photo/Robert PierceROBERT PIERCE • Leader & Times

Two drivers sustained minor injuries, and one was issued a citation following an accident Tuesday afternoon in west Liberal.

The Liberal Police Department reported around 2 p.m. Tuesday, emergency personnel were dispatched to the intersection of Western Avenue and Locke Street for a possible injury accident.

“It was found a 2006 Nissan Pathfinder, driven by a 57-year-old male, was northbound on Western when a 2011 Kia Sorento, driven by a 21-year-old male, was southbound on Western,” a release from LPD said. “The Sorento attempted to make a left turn onto westbound on Locke Street. The Sorento failed to yield to the Pathfinder, causing the vehicles to collide.”

Both drivers sustained minor injuries but refused treatment by EMS. The driver of the Sorento was issued a citation for failure to yield the right-of-way while making a left turn. Both vehicles were towed away with extensive front end damage.