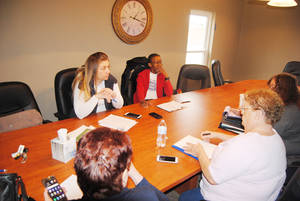 Liberal Area Coalition for Families Director Sarah Foreman meets with her board members in the coalition’s new home in the upstairs portion of the Pancake Day Hall of Fame. L&T photo/Robert PierceROBERT PIERCE • Leader & Times

The Liberal Area Coalition for Families was started in 2001 and registered as a non-profit with the state in 2005 when it received its first grant.

In the nearly two decades since, the coalition has grown from the original eight members to an average of 25 to 30 members at each monthly meeting representing 20 entities of the community.

With that growth, LACF has relocated a couple of times, with the first office in a space at Liberal’s Southwest Guidance Center, and Director Sarah Foreman talked about how the continued growth has prompted need for new space.

“Just as our programs and grants have evolved, we’ve needed more space,” she said.

The coalition was housed most recently  at The Plaza in north Liberal, and with all of LACF’s work being grant funded, Foreman said one of those grants for rental of that space.

“They reviewed the grant amount for all of the grantees across the board a couple of years ago,” she said.

Since the inception of International Pancake Day in 1950, that event too has grown from one day to four days of local fun in a friendly competition between Liberal and Olney, England.

With the need for new space urgent and less grant money for rent available, this prompted LACF leaders to find a more affordable space in town with the coalition’s grant money, and now the coalition is housed in part of the town’s history of the international celebration.

The coalition office is now located in the upstairs portion of the Pancake Day Hall of Fame. Foreman said when LACF members approached Pancake Day leaders, the relationship just seemed to make sense.

“They would have someone there more often,” she said. “We could help out with some of those monthly bills and just work together in that space.”

The move came in the summer of 2019, and Foreman said thus far, the new space has been great.

“The office itself is beautiful,” she said. “It’s been well taken care of, and having our staff there, I think is great for the Pancake Day board, knowing someone’s in the office more frequently. It really works out well for both of the organizations.”

Foreman said the relocation was not so much about extra space, but rather a different configuration.

“They have a very nice board room upstairs we’ve been able to utilize for a number of meetings and a little more storage space,” she said. “That has been nice.”

Foreman said she likes having a tie between her agency and part of Liberal’s history at the Hall of Fame.

“It’s been very well maintained and taken care of, and it’s nice,” she said. “When we have meetings there, we tell people we’re the upstairs of the Pancake Day Hall of Fame. If they haven’t seen that before, they have an opportunity to see it at that time, so we’re getting a few more visitors in there to know the space is there.”

The coalition is renting the space from the Pancake Day board as part of the partnership of the two organizations, Foreman said LACF members agreed this yer to do the Pancake Day Carnival in place of the talent show that is a more well-known part of the celebration.

“The coalition is sponsoring the carnival,” she said.

The carnival is scheduled to take place from 3 to 5 p.m. Sunday, Feb. 23, at the Seward County Activity Center. Foreman said organizations are still being asked to sign up for booths.

“We’re asking they provide a game or activity for children and families,” she said. “If they would like to provide a healthy snack, we’ll help them with the purchase of the food.”

For those wanting to help out in those areas, they can contact LACF Communications Coordinator Adriane Hatcher at This email address is being protected from spambots. You need JavaScript enabled to view it..

Foreman said the new LACF office is not open all the time, but more by appointment only.

“Our staff makes appointments throughout the week with different organizations, but we don’t have somebody there all of the time,” she said.