LHS Drama to bring Shakespeare, Brothers Grimm to the stage later this summer 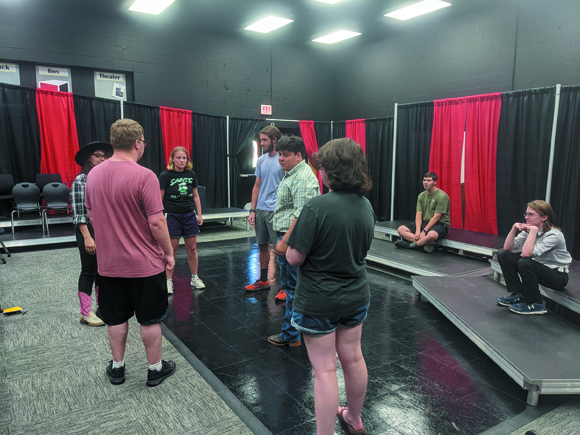 LHS drama students rehearse a scene from one of their upcoming summer plays. The department will be performing ‘The Brothers Grimm Spectaculathon’ and ‘A Midsummer Night’s Dream.’ Courtesy photo/Micah HoweryELLY GRIMM • Leader & Times

Those looking for some good live entertainment later this summer will need to look no further than the Liberal High School Drama Department.

As LHS Drama instructor Micah Howery tells it, the students have been extremely busy preparing a pair of shows for the community.

“The LHS Drama Department will be doing two shows this summer, and we're really excited for both of them. The first one will be 'The Brothers Grimm Spectaculathon,' which is a satire on fairytales and very silly, and we'll be performing that show at 7 p.m. July 15, 7 p.m. July 16, and 3 p.m. July 17,” Howery said. “The second show will be a cutting of Shakespeare's 'A Midsummer Night's Dream' – we cut it down to about an hour, and that was mostly for the actors' sake since getting EVERYONE rounded up for rehearsal is a bit of a challenge because of everything else the students have going on in the summer. With 'A Midsummer Night's Dream,' we'll be performing that at 7 p.m. July 29, 7 p.m. July 30, and 3 p.m. July 31. All performances will be in the Liberal High School Black Box Theatre except for the 'A Midsummer Night's Dream' matinee, that will be performed in Light Park at the pavilion. As far as tickets, we're not charging anything, but if you want to come, come early because there's limited seating in our Black Box Theatre for people. We actually wanted to do a play in the park last year, but there was some miscommunication and other circumstances, so we weren't able to do that, but we were able to get everything reserved for this year.”

Howery added there was quite a bit of student input when choosing the shows for this summer. “We were talking last year after we did 'The Actor's Nightmare' and we had talked about doing something more dramatic/serious, but then Ms. Climenhaga ended up choosing a serious play for the spring, so we decided we'll do something more serious next summer,” Howery said. “I'm a big fan of Shakespeare, I enjoy teaching his work and helping the students learn how to grasp the writing style and cadence and everything else, because there's so much that can get lost since his plays are in a different version of English. I enjoy teaching Shakespeare to my students because it allows them to see how language can be used and how many different ways communication has changed. While grasping Elizabethan English can be difficult, that's not the best part of Shakespeare's work, the best part is the descriptions and poetry of everything, so helping them see all of that from a different perspective really helps. I've had a lot of great feedback from the students about the shows we're doing, I'd actually offered them a choice between the two shows, and they ultimately said 'Let's do them both!' I checked with the district administration about what that would take, and they ended up approving everything. I've also actually directed 'The Brothers Grimm Spectaculathon' before, and it's a super funny show with audience participation and all that zaniness and everything else, so I thought that would appeal to everyone.”

Howery added the idea of performing in the park also came from the students.

“We'd actually talked about doing that last year with 'The Actor's Nightmare,' but we ultimately realized it wouldn't have fully worked outside. And that was actually the students' idea, they wanted to do a performance someplace besides the Black Box Theatre or Maskus Auditorium,” Howery said. “We'd also talked about using the mini-ampitheater at SCCC, but there wasn't enough space for what we were doing, so we ultimately decided upon the pavilion at Light Park. And we're really excited about that because it's not something we've done before, and for me, it also brings back some memories of being in college at Fort Hays State University in the 1990s and seeing a bunch of arts and performances on the quad area because the directing students were in charge of all of that stuff. And 'Shakespeare in the Park' is a phrase people use a lot nowadays, so that also inspired the students.”

With the rehearsal process going on, Howery said the students are having a lot of fun.

“Right now, the students are having fun, and again, I don't think it's quite hit them yet how close the performances are, so they're enjoying the rehearsal process and getting their dialogue and timing and all of that down,” Howery said with a chuckle. “I'm not quite sure we've reached that level of awareness yet as far as realizing the shows are only a few weeks away, so we're not far away from opening nights at all. Pretty soon, we're going to start gently reminding everyone how close we are to the performances and give them some more concrete deadlines as far as being off book and things like that – if you don't do that, there can be a bit of chaos. I know the students are excited to perform, one of the hardest things we're dealing with while working on 'The Brothers Grimm Spectaculathon' is keeping them from laughing at the show's humor during rehearsal – they know the jokes well enough by now and they know intellectually they won't be able to laugh during the performance, but they're enjoying it all so much they can't help it. 'A Midsummer Night's Dream' has also been really fun because it's going to be a percussive performance, which helps the students keep the right cadence and meter and everything else with their dialogue, and the students have really enjoyed that and the slapstick humor in the show.”

Howery added he hopes to see a high community turnout for the performances.

“First off, people don't really get that many opportunities to see live Shakespeare, especially in this area, and part of that has to do with its level of difficulty – when directors are choosing what shows they want to do, they prefer doing something that will be quicker and easier to put together, especially at the high school level,” Howery said. “For 'A Midsummer Night's Dream,' we did make some cuts to that and it will be just about an hour, so come and hang out and have a good time enjoying some Shakespeare. It's also about supporting the students, and it really encourages them when they step out onstage and know they've got a full theatre. We also need to show support for the arts, because these students have worked so hard on putting these shows together, and this is something they're excited about. I want to thank the USD 480 administration for its support with what we're doing with this, and I've got to thank the students because they're doing such a great job and they're working so hard putting these shows together.”