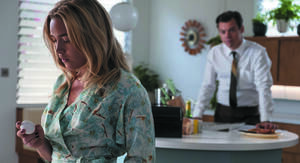 Harry Styles and Florence Pugh in a scene from the film “Don’t Worry Darling.” The movie is expected to be a big box office draw for the upcoming fall movie season. Courtesy photoELLY GRIMM • Leader & Times

Those looking for some entertainment this fall and winter will certainly have no shortage of choices when it comes to movie selections at the theaters.

According to Mitchell Theaters Owner Brian Mitchell, theaters are excited to be transitioning from summer blockbuster season to the fall season. Overall, Mitchell said, he was very pleased with what he saw this summer.

“Our summer season started off huge with 'Top Gun: Maverick,' and we had that playing for quite a long time, and there wasn't really another move that touched that as far as box office numbers. Right after that, we had 'Elvis,' 'Jurassic World: Dominion' and a few other movies that really helped with our box office recovery, no doubt about that,” Mitchell said. “We had several of our locations that were back to full capacity, so we were really pleased with that, and I think a lot of that has to do with part of the last batch of COVID-19-related delayed movies finally being released, so people had been waiting for quite some time for those particular movies. We'll see some more of those delayed projects throughout the fall and winter like 'Black Adam,' the next 'Mission: Impossible' film and others, so we're ready to see how all of those end up doing. We started the summer out with a bang, ended with a bit of a lull, and we're gearing up for what we hope is a strong fall season. 'Top Gun: Maverick' was easily our biggest summer release this year, and I know there had been a lot of people waiting for that to come out after COVID-19 calmed down. 'Minions: The Rise of Gru' also did really well, and so did 'League of Super Pets,' so we were overall pretty happy with how the season turned out.”

With the summer season now in the books, Mitchell said movie theater staffs are gearing up for the slate of movies being released in the coming weeks.

“In October, we'll have 'Halloween Ends,' 'Black Adam' (which we're expecting to be particularly huge), 'Ticket to Paradise' with Julia Roberts and George Clooney, and then in November we'll have 'Black Panther: Wakanda Forever,' 'Strange World,' and then later this year will also see the release of the 'Avatar' sequel and some others we're expecting to be big for us,” Mitchell said. “We also recently saw the release of 'The Woman King' with Viola Davis that got some really good reception, and soon, we'll see the release of 'Don't Worry Darling,' which has been getting some buzz, and there's some other releases we're really excited about. I've said it many times before, we like it when releases are like this and when there are multiple genres represented to appeal to different audiences.”

Overall, Mitchell said, he is happy to see people back in theater seats and hopes to see numbers continue to grow. Mitchell also talked about what he foresees with hybrid releases of movies both in theaters and on streaming services.

“It's good to see people wanting to get back into the movie theaters and enjoy that experience. We saw that in the summer, and I expect that will continue on throughout the fall because people are realizing they want to be out and about more instead of just streaming something at home,” Mitchell said. “And I feel like hybrid releases will continue for a while, but I think going forward, that 45-day window of having a theatrical release will be the norm. For the most part – and I know the hybrid model will be done with 'Halloween Ends' – but for the most part, I think going forward, there will be more of a measure of how quickly movies go to streaming services and not as much the box office draw. In other words, I think if a movie isn't holding as well in theaters, that could signify a quicker release to streaming services so people can find it there. So I think the model could become the theatrical release first and then see how that holds, and then the release on VOD places. With the hybrid releases, I think those will be going away before too long because stocks for Netflix and Disney+ are getting pounded because those companies came to the realization that you can't put big-budget movies on just streaming services and recoup the money that was put into it.”

Mitchell said he is excited to see how the fall movie season ultimately turns out.

“We've started off with a slight lull, which is normal when transitioning movie seasons, but I think as the fall goes on, we'll see bigger numbers thanks to the bigger releases we'll see, and by the time Thanksgiving and Christmas come out, we'll have seen a pretty solid season as far as box office numbers and those factors,” Mitchell said. “And speaking of releases in the new year, there are a lot of those movies we've been hearing about, but some of those are still being ironed out, but we are really excited with what we've been hearing about already. There are so many different movies being advertised and released, and if there's something in particular that looks good to you, come on out and see it. We can't get EVERY movie, but we try to get as many as possible for people so we can have as wide a selection as possible for our moviegoers. As always, we appreciate all our customers who come out and see the movies we have available, and we look forward to seeing everyone at the movies!”