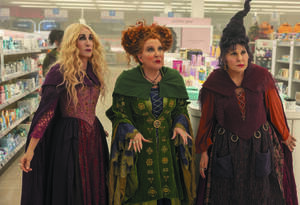 Nearly 30 years ago, audiences were introduced to the Sanderson sisters through the Disney film “Hocus Pocus,” which has taken its spot as a cult classic for the Halloween season thanks to multiple showings on TV throughout October.

It was one I enjoyed watching when I was growing up, and when I heard earlier this year of a sequel officially happening and being released on Disney+, my first thought was “This could be either halfway decent or a complete trainwreck.” And ultimately, I ended up being right on both counts.

The chemistry between Midler, Najimy and Parker is still there, and there was definitely an air of excitement from all three of them to have the chance to step back into their witchy roles from nearly three decades ago. The trio is still able to play off of each other, and there are multiple moments of great comedic timing seen between them as the movie goes on, including a pair of catchy musical numbers. Throughout the years, the three have expressed an interest in returning for a sequel story at some point, and I thought it was great to see them back together. In some ways, it was almost like watching a family reunion. In that spirit, I really liked the opening scene that showed the trio as youngsters, and I thought the younger actresses did a great job capturing their older counterparts’ mannerisms and chemistry, particularly Taylor Paige Henderson as young Winifred. After I finished the movie, in fact, part of me wished there had been more time spent on the Sandersons’ early years, because I feel like there’s a lot to explore there.

Another standout for me in the movie’s cast was Doug Jones returning as Billy Butcherson, Winifred’s former lover, and I liked his return because the character was fleshed out more and was given more to do compared to just grunting and being zombie-like in the original movie. And even though she was only in the first scene of the movie, I also enjoyed Hannah Waddingham as the Mother Witch, the witch who gifts the Sandersons their famous spell book – she made such a big impact (to me) in her short time onscreen, and I wouldn’t have minded seeing more of her character in the movie.

Even with that, however, I thought there definitely could have been some improvements to the writing and overall screenplay, which I thought was rather weak. I couldn’t help but be slightly disappointed with the end result in those regards and after the movie, my main thought was “It’s been basically THREE DECADES since the original movie was released, and THAT’S what ultimately ended up being made?” There could have been so much more done, and some aspects way more fleshed out than what was done with the end result. The original movie has such a huge fanbase that gathers around the cauldron (so to speak) to watch it every year, and I definitely felt the story and screenplay were a letdown. I also have to question why it took so long for the sequel to get made given the huge fanbase of the original movie and how willing the original trio of witches was to return for a sequel. At this point, it almost feels like too little, too late for a sequel and the overall mood for the creative team was “Okay, FINE, we’ll give you the sequel already.” I feel if there had truly been any interest from Disney in making a sequel, it should have been done WAY before now.

On the opposite end of that line of thinking, however, I do have to applaud the fact that there was actually effort into putting together an original story rather than just slapping together something for nostalgia’s sake, which would have DEFINITELY been noticed by more diehard fans. As I said, there could have been improvements to what was ultimately the end product, but I do appreciate there was at least some effort toward originality.

While the overall writing for the movie could have definitely seen improvement, there were a few moments I did appreciate in the movie, particularly with moments that had the message of family/sisterhood being important in life. There are a couple of those moments particularly shown near the end of the movie, and I thought they were actually very sweet, even if a bit cliché.

Overall, I would give “Hocus Pocus 2” a “C” grade. It’s great seeing the Sanderson sisters back together for another ride after all these years, but I felt there could have been much more effort put forth in terms of the overall story and screenplay. Along with the original trio, there were some other standout performances in the movie, and there were multiple moments of great nostalgia throughout. If you’re a fan of the original, or looking for something for the little ones to watch for Halloween, this will probably work for you.