Christmas season offers much in the way of musical selections 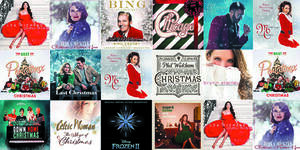 December is now in full swing, which means recently, I have been listening to quite a bit of Christmas music while getting work done. That’s included going back to some old favorites and discovering some new favorites that will now be included in my future yuletide listenings.

So, in that spirit, here are a handful of albums that should help you get in the holiday spirit for this year and maybe in the future.

This album was actually released back in October, and even though I have my personal firm rule of not listening to Christmas music until Dec. 1, I knew I had to listen to this most recent album from Stirling, who continues her musical awesomeness with arrangements of “Little Drummer Boy,” “Joy to the World” and “O Holy Night” as well as some original songs like “Snow Waltz,” “Ice Storm” and “Magic.” Stirling’s violin skills continue to be amazing, and her style fits each song so, so well. My absolute favorite song on the album is “God Rest Ye, Merry Gentlemen,” and the song and video for “Snow Waltz” are also very enjoyable, mostly because the video evokes “The Nightmare Before Christmas” vibes. This album will definitely be on my listening list in the future.

I actually reviewed this album back in 2020 and enjoyed it so much I got it as a Christmas present for myself after the holiday. Underwood’s vocals continue to astonish me, and while the album has some elements of minimalism to it, there’s plenty to enjoy. Particular favorite songs of mine from this album include Underwood’s duet of “Hallelujah” with John Legend (which left me near tears the first time I heard it) and her duet with her young son, Isaiah, on “Little Drummer Boy.” “Let There Be Peace” is also a great anthem and a very soulful celebration of the Christmas season. Featuring mostly traditional carols, this is another album that will be on my listening list.

This movie was another review I did back in 2020, and the soundtrack has been a definite on my listening list since then. The songs let everyone’s vocal talents truly shine, particularly leading lady Madalen Mills’ big “Square Root of Possible” and Forest Whitaker’s early number “Over and Over,” which would fit in perfectly with any Disney project. The music has great balance, and you hear a little of everything from familiar older styles, jazz, Broadway and other current influences. Overall, the songs are all very soulful and do a great job of lifting everyone into the holiday spirit.

This is an album I discovered last year, and it’s one that’s already gotten a listen from me for this year. Songs on the album include “Jingle Bells,” “Angels We Have Heard On High” and “Silent Night,” and Bocelli’s lovely vocals help elevate them. My absolute favorite song on the album is “Adeste Fideles,” because there’s just so much power and love for the song heard in Bocelli’s rendition, and it’s one I’ll look for frequently now. There are some other Italian songs on the album that are particularly enjoyable, and overall, it’s a fantastic album for those looking for a maybe more traditional take on those favorite Christmas songs.

Celtic Woman “A Christmas Celebration” and “Home for Christmas” albums

Celtic Woman has released a few different Christmas albums throughout the years, and these two top the list as far as my favorites because the vocals and harmonies throughout are just absolutely mind-blowing and insane and fit the Christmas vibe so, so well. From the “Home for Christmas” album, my particular favorites are “Hark the Herald Angels Sing,” “Silent Night,” “What Child is This?” and “Auld Lang Syne” (so there’s even a New Year’s vibe on the album). From the “A Christmas Celebration” album, my favorites are “Away in A Manger,” “Carol of the Bells,” “O Come All Ye Faithful” and “Let It Snow.” Anyone looking for simple and lovely renditions of Christmas songs will enjoy these albums.

This is my most recent discovery, thanks to YouTube, and I ultimately ended up really enjoying listening to this album. There are many Christmas standards featured, including “The Christmas Song,” “Frosty the Snowman” and “Sleigh Ride,” and Fitzgerald has so much fun with her own interpretations of them. Each song is so fun and jazzy and uplifting, it’s hard not to want to get up and dance at least a little bit, and Fitzgerald’s vocals complement the songs very well. If you’re looking for a more jazzy Christmas interpretation, this album is perfect for you.

I’ve been a fan of a cappella group Pentatonix for a while now, and one of my favorite albums from the group is their “A Pentatonix Christmas.” Featuring their own spins on “O Come, All Ye Faithful,” “White Christmas” and “Hallelujah,” along with original songs such as “Coldest Winter,” this album is just so much fun to listen to and I will never be over the insane amount of talent in the group and how they’re doing everything using ONLY their voices. You can hear the absolute love for the music as the album goes on, but you can also tell there was definite thought as far as how they could incorporate their own spin. “Hallelujah” is my absolute favorite on the album, and the accompanying video is just stunning.