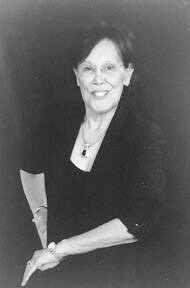 She was born June 29, 1937 to Freeman and Mildred Walker in Claremore, Okla.

She married Ernie Walcher June 8, 1958. He preceded her in death.

She was a member of the Miami Tribe of Oklahoma.

She graduated from Manter High School in Manter in 1954. She later graduated with a bachelor’s degree in English from Panhandle A&M College in 1958.

She was always driven and not ever afraid to try new things.  She travelled on many adventures with her family, organized Chautauqua events, and was involved in the building and women’s committees at the First United Methodist Church in Woodward.

She was also preceded in death by her parents; sister and brother-in-law, Muriel (Walker) and George Tedder; and brother and sister-in-law, Bud and Nicole Walker.

Burial will follow at the Elmwood Cemetery in Woodward, Okla. Face masks are recommended in the church.

Memorials are suggested to the First United Methodist Church in Woodward or the Miami Tribe of Oklahoma in Ellen’s name through Billings Funeral Home, 1621 Downs Avenue, Woodward, OK 73801.

Condolences may be left at billingsfuneralhomewoodward.com.