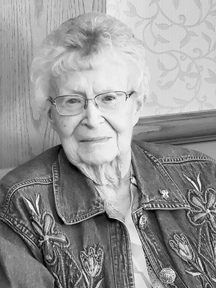 She graduated from Lamar High School in Lamar, Colo. in 1953.

Over the years, she held various positions while working for local businesses including Davis Jewelry, several doctors’ offices, the local dentist office, and an insurance agency.

She was exceptionally proud of her role as one of Morton County’s first EMTs.

She also served as the Morton County District Magistrate Judge from 1976 until her retirement in 1988.

She also enjoyed woodcarving and working with stained glass.

She was also preceded in death by her parents; son, Allan; son-in-law, Clint Thomason; and daughter-in-law, Barbara Davis.

Burial will follow at the Elkhart Cemetery in Elkhart.