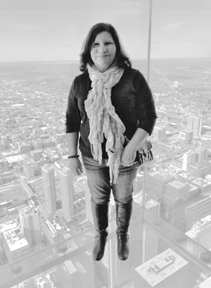 Juanita Frances Brown, 60, died Tuesday July 26, 2022 at the Via Christi Hospital in Manhattan.

She was born March 26, 1962 to Conrad and Petrita (Gonzales) Martinez.

She graduated from Keyes High School in Keyes, Okla., and went on to obtain her Bachelor's degree in education from Oklahoma Panhandle State University in Goodwell, Okla. Upon graduating from OPSU she briefly taught in Felt, Okla.

In August 1997, she began her career Seward County Community College, where she taught developmental English and was a former director of academic achievement. While at SCCC, she was also an advisor for the Hispanic American Leadership Organization (HALO), active with the Saints Booster Club, and a Mentor for SCCC Migrant Education Program, Via Fort Scott CommunityCollege. Frances was a recipient of the NISOD (National Institute For Staff and Organizational Development) Award.

She was also a strong community supporter where she assisted with voter registrations and serving as a volunteer with the American Red Cross.

She was a member of the St. Anthony of Padua Catholic Church in Liberal.

She was preceded in death by her mother; sister, Maria Sandoval; nephew, RC Manriquez; and nieces, Matie Huffman and Maria Elena Sandoval.

Rosary services will be at 7 p.m. Tuesday, Aug. 2, 2022 at St. Anthony of Padua Catholic Church in Liberal.

Condolences may be left at www.millermortuary.net.