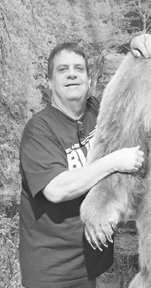 He was born in Liberal KS in 1965 the son of the late Anna Fay (Wright) Harrison and the late Jack Merle Harrison both from Liberal.

He married the love of his life and his high school sweetheart – inseparable since 1980 when he broke his leg skiing, and she was his candy striper.

Tim was a 1983 graduate of Liberal High School.

He started his career at H&W electrical service where his skill set of HVAC allowed him to grow for 40 + years.

He also had a deep love for cooking where later in his life, at the age of 51, he went back to school and graduated with a certificate of Culinary Arts.

He had many qualities that everyone admired and will truly miss like is big hugs, his loud voice that would project and get your attention at any sporting events he was at to cheer you on. When he greeted you at any gathering, he would give you a love punch in the arm followed by the hardest tightest hug he could give you. Tim was the jungle gym all the little children could climb all over, children were always drawn to this huge man because of his huge heart. He was the best uncle to all his nieces and nephews and treated them like his grandchildren. Tim was always the friendliest person in the room and always made everyone feel welcome.

You could always find cookies, nuts or chocolate all over the house where he freely grazed. He was also known to check out the fridges and pantries when he would visit family and friends.

He never met a stranger and would talk your ear off if given the chance.

Other survivors include two daughters Amanda (Mandy-Roo) Harrison, Kansas City, Megan Yankee, Taos, New Mexico; two brothers, Pat Harrison and wife, Jackie, and niece Monica Harrison, of St. Myers, Florida, and Mike Harrison and wife Kari, and nephew, Dustin Hunt of Green Valley, Arizona. He was dearly loved by is Aunt Elaine Brown and husband Terry of Berthoud, Colorado. Tim is survived (on his wife’s side) by 9 sisters-in-law, and 9 brothers-in-law and so many nieces, nephews, great-nieces, great-nephews that we stopped counting. Fondly forever known as, Uncle Timmy. Lupe nannied many children throughout the years, Tim was very involved with many of those children. In recent years a sweet girl named Ella Williams ran away with Tim’s heart. Tim loved his kitties, Roxy, Tiger, and Steve were just some of last, in a long line of animals that shared his bed and affection. Sometimes Lupe was able to crawl in the bed between all of the cats and cuddle her big teddy bear Tim.

• Celebration of Life will be Saturday, August 13, 2022 in Liberal at Believers Ministry 1071 S. Clay Avenue led by Pastor Frank Holmes starting at 2 p.m.

Tim would not want you to dress up, he hated wearing uncomfortable clothes, come as you are and let us have some laughs like Timmy would have wanted.

In lieu of flowers or memorials please make a donation to your local pet rescue/animal shelter in Tim’s name. https://gb774.app.goo.gl/3fTHA

Death is not the opposite of life, but part of it… Tim has left the building.