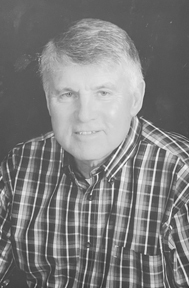 He was a graduate of Hugoton High School in 1971 and went on to complete an agronomy degree from Fort Hays State University in 1975. He was a member of Delta Sigma Chi Fraternity while attending school there.

He began his career by going to work for the Kansas State Extension field and research center in Garden City, and then went on to be the agronomist for the Garden City Cooperative.

He was a member of the First Christian Church in Hugoton where, through the years, he was active in Sunday School, children’s church, bible study and various church committees. He also served as a deacon.

He served on the Stevens County Extension Board, City Council and the Economic Development Committee in Hugoton and won the Shakers and Movers award for his work on leading the development of independent gas utilities for area irrigated farmers.

He also represented the agricultural profession by serving 20 years on the Kansas Corn Growers Association and the Kansas Corn Commission where he used his experience and expertise in agriculture to benefit farmers across the state.

He was preceded in death by his parents; and sister, Diane Johnson, McPherson.

• A celebration of life took place Thursday, Aug. 11, 2022 at the First Christian Church in Hugoton, followed by a graveside service at the Hugoton Cemetery in Hugoton.

Memorials are suggested to the Kansas Corn Growers Association.