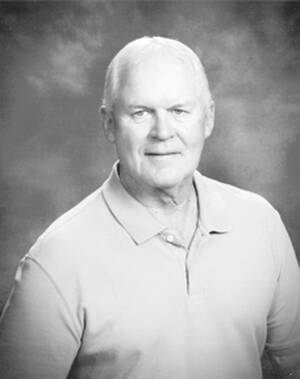 He graduated in 1966 from Hanston High School and continued his education at Kansas Wesleyan College in Salina where he played football and was a member of the Pi Sigma Upsilon fraternity.

He enlisted in the United States Navy Seabees where he served in Palau, Hawaii and California. He was a proud veteran and made life-long friends during his service.

He moved back to Kansas after being Honorably Discharged in 1973. Making Ulysses his new home, he worked for Webber Supply building grain bins until he started his own company in 1982.  He was the owner and operator of Wilson Crane Service for more than 40 years. He loved his heavy equipment and celebrated the arrival of each as a new family member.

He loved supporting his kids and grandkids at their school and sporting events and goat shows. He enjoyed supporting the Ulysses Tiger Sports and watching the Chiefs play football.

He was a member of the Grant County Recreation Board from 1996 to 2004, and continued supporting all community events.

He was an active member of the First United Methodist Church serving on the board of Trustees and as youth leader.

He was the loving father of Jiana Benham and husband Chris of Lyall Bay, New Zealand, Kelly Wilson and wife Crystal of Ulysses, and Kaci Wilson of Lawrence. Proud Papa Jim of his six grandchildren: Natalie, Jesse and Isabella Wilson, and Taylor, Holly and Elle Benham; Dog Dad/Grandfather to Shelby, Gus and Frank. Brother of Jean Lyman and husband Dean of Sharon, Jared Wilson and wife Veronica of Little River, and Jolana Perkins and husband Roger of Miltonvale; loved uncle and great-uncle.

He was preceded in death by his parents; and daughter, Traci Wilson.

• Funeral service will be at 2 p.m. Saturday, Sept. 24, 2022 at the First United Methodist Church in Ulysses, with Reverend Todd Guinn presiding. The service will also be streamed on the Garnand Funeral Home Facebook page.

Burial will follow at the Ulysses Cemetery in Ulysses, with Military Rites conducted by Dexter D. Harbour American Legion Post #79.